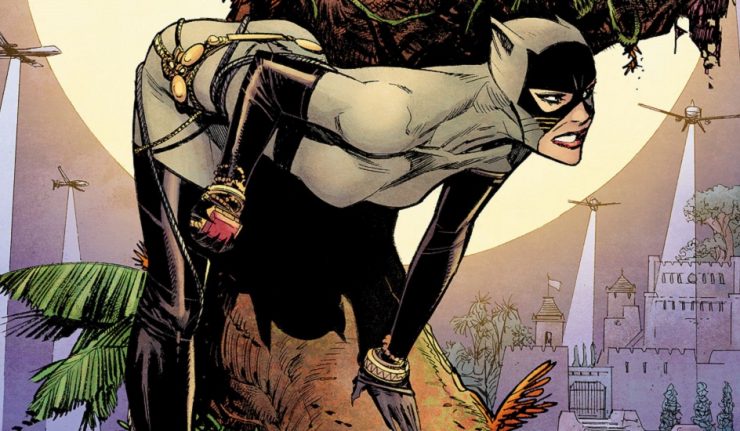 “Thanks for the heads up!  But I’m a big girl.  I don’t need a White Knight to come to my rescue.” – Catwoman

Even Catwoman needs a break from the city sometimes! Featuring a story by Eisner Award winner Sean Murphy (Batman: White Knight) and the DC debut of co-writer Blake Northcott (Vampirella), join Catwoman on this two-part story as she leaves for the jungle to blow off some steam in the best way she knows how…stealing the world’s largest diamond from an annual super-secret supervillain auction, of course! This is Catwoman #23.

Blake Northcott and Sean Murphy take over this story in a new story arc that breaks with Selina’s involvement with the Joker War.  DC does a great job of employing Sean Murphy to do some writing on this book as his “Murphyverse” has attracted a lot of attention.

Therefore, but putting his fingerprints on this story, DC puts him mainstream in the current DC Universe, but he leaves an Easter Egg or two for his readers (ie Selina’s quote I highlight at the beginning of this review).

What’s better than having Selina go to a jungle inhabited by one huge cat, but also provide to her an auction that has one huge diamond.  Not to mention a list of notes from her betrothed Batman that is to be auctioned off to the highest bidder.

Does this story blend in with the Joker War?  It’s too early in the fray to tell as the last time we saw Selina in Gotham, she was knocked out by one Punchline.  Here she is sipping champagne and literally dining with a Don Johnson wannabe from a 1980s Miami Vice set.

Incidentally,  Cian Tormey tears up the issue with a beautiful interpretation of Selina as well as spot on caricature of a Don Johnson wannabe.  This issue should be read with Phil Collins’ In the Air Tonight playing in the background!

Speaking of the 1980s, the tease at the end of the issue “We’ve got fun and games!” as Selina is wounded by a spear in the jungle while a street urchin and a huge cat are looking at her!  Holy Oliver Twist!  This is a lot to unpack.

Murphy’s involvement in this playground of Selina’s is cause to pause!  I love that!  But I am reticent to be too excited as this is not in the current timeline.  Is it a prequel to the Joker War?  Is it part of it?  Is it aftermath?

With some much time invested in Selina’s book and we have been with her in her quest to take down Raina Creel, are we really giving her some unnecessary side adventures?  I mean, she is Batman’s betrothed and her plan over in Batman has provided Joker Bruce’s billions.

We need to start acknowledging that in this book!

Murphy’s contribution saves the day!  And I’m in on a two-parter with a Don Johnson white suit and electric blue t-shirt!  Throw in the sound track and the big cat and you have a pretty eccentric tale!