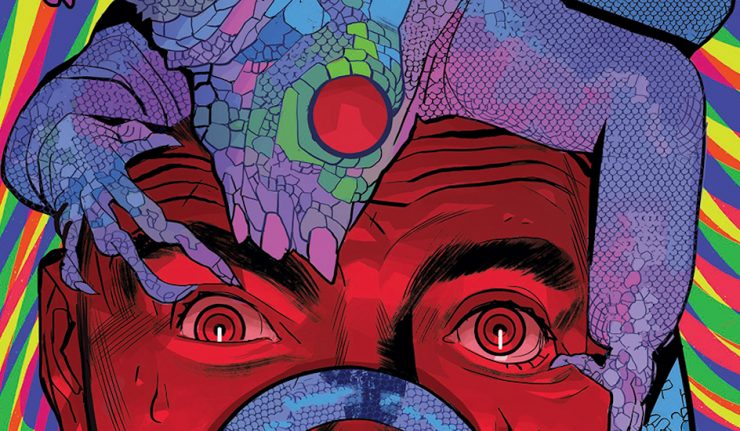 The questions from the beginning are finally answered in this issue. At least, some of them are. From Galvin to Denis, to the origin of Tucker, the pieces are finally revealed. It all begins with a bright light that changes the world, the people, and the small town of North Waherek.

There is a moment during the act of forgiveness when one person might say, “It’s not your fault.” The second person might respond, “yes, it is” whether that answer is true or not. At that moment it’s almost impossible to convince the second person of anything different. It’s the power of guilt and shame, and all the feelings that go with it.

In this case, Galvin really is at fault. He literally drove Denis to the heart of a mess and left him there.  It’s Galvin’s fault this whole story even began, and the reason all comes back around to guilt.

Atomic age stories seem to never go out of style. If anything, they only grow more pronounced with age. When I was a kid there were stories about radiation mutating animals. Creatures around disaster sites like Chernobyl were said to suffer from abnormal growth and damaged development.

This is the story of a town that created an identity through the changes that it experienced. North Dawhere is a place touched by God according to the father of Tucker. The vision acquired through his third eye reveals the range of color spectrum he can see glimmering around the talons and reptilian tail his wife has gained. This enhanced perspective makes him look at his son with a newfound curiosity that is filled with joyous wonder.

Jedidiah’s mother is a powerful wife who is unabashedly faithful to her husband and son. Her sense of profound loss is matched only by the desire to be exactly where she chooses without accepting an argument. It seems to amplify the sweetness that Jed’s father so kindly displays.

Perhaps the most dreadful consequence of Galvin’s actions is that those actions require the services of Bob and his nail gun. Galvin has created a mess that only Bob can clean up. Which is the reason that Bob also arrives in North Dawhere AKA Nowhere.

Jed’s dad experiences some really rough treatment. I understand that no animals were harmed during the making of this comic, but that doesn’t make certain events any easier to handle. Sometimes it only makes said events harder.

After four issues Denis is finally getting some idea of why he woke up in the middle of nowhere way back at the beginning of the first issue. But the discovery that it was Galvin’s fault and that it was an apparent crisis of consciousness only makes the waters muddier. And it doesn’t help Denis and his feeling that he always makes a mess of things.

At the same time, the history of North Dawhere is only beginning. This is a town that was isolated because of an off-the-books project. The mystery of how this was kept secret for so long is one that could be explored over dozens of issues.