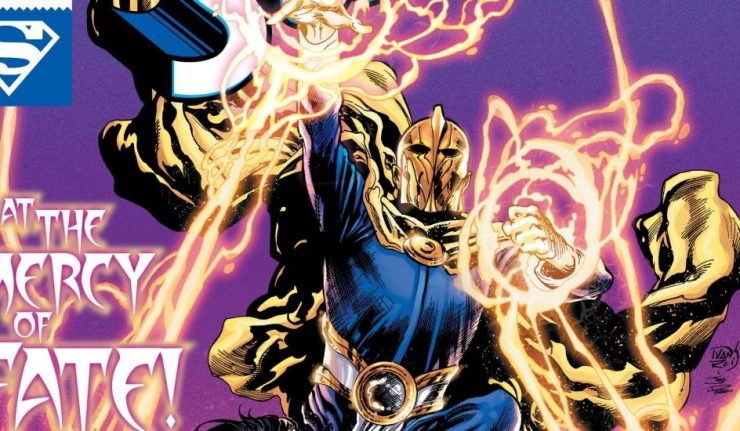 Superman #24: Superman’s legendary susceptibility to magic is about to turn his life inside out and upside down. A mysterious new villain has come into Superman’s world to pit him against the most powerful sorcerer and agent for the Lords of Order: Doctor Fate!

In Superman #24, Superman and Doctor Fate face off against the magical villain Xanadoth. It’s a long-established part of the Superman mythos that he has a vulnerability to magic. Superman is at a distinct disadvantage in this battle, and it seems that it would be up to Fate to do the heavy lifting.

However, Doctor Fate comes up with an imaginative solution. Superman wears the helmet of Nabu, combining his Kryptonian powers with Nabu’s mystical abilities. This increases Superman’s power while diminishing his weakness to magic, allowing Khalid and the rest of the Justice League Dark team to subdue Xanadoth.

I find it interesting that Khalid struggles with Nabu over who controls their actions as Doctor Fate. We have seen the same struggle between Nabu and Kent Nelson over the decades, with one or the other being the dominant personality of Fate. We even see Nabu go as far as to seize control from Khalid when Khalid ignores his command, stating, “Fine. I’ll do it myself”. Doctor Fate’s effectiveness as a hero is going to be severely hampered if they can’t develop a proper working relationship.

I do like seeing the addition of Khalid as a confidante that Superman can discuss his concerns, feelings, and frustrations with. However, I do wonder if Khalid was the best choice. He’s rather new to being a superhero. Kent Nelson, or another Justice Society member might have been a good pick, being older and more experienced. Khalid does have medical training, but he’s a med student, not a fully trained psychologist. However, despite his not being the ideal choice, I’m glad to see that Superman has chosen someone to help him sort through his feelings.

As a concept, Xanadoth is a very cool idea. He’s a Chaos Lord who was too chaotic even for the Lords of Chaos – so much so that they joined forced with the Lords of Order to defeat him.  However….

… Even though the concept is great, it doesn’t seem to come across on the comic page. He doesn’t seem any much difference than any other overpowered and oversized villain that Superman contends with on a regular basis. If Bendis brings Xanadoth back for a rematch, he needs to work on making Xanadoth seem more than just a generic supervillain.

Also, the similarity between Xanadoth’s name and Madame Xanadu’s is referenced again. This repetition seems to imply that there is some connection between the two characters, but the question again goes unanswered. It seems a bit pointless for Bendis to work the same hint he already dropped last issue again without adding any new information. If there’s a connection, then give us a bit more to go on, if there isn’t, then there’s not really any reason to continually remind the readers about the similarity in names.

Since the start of Bendis’ run on Superman, the writing has been all over the place. Some issues have been great and others… well not so great. Superman #24 seems to fall somewhere in the middle. There’s the makings of an excellent story in here, but somehow it comes out as good, but not great.