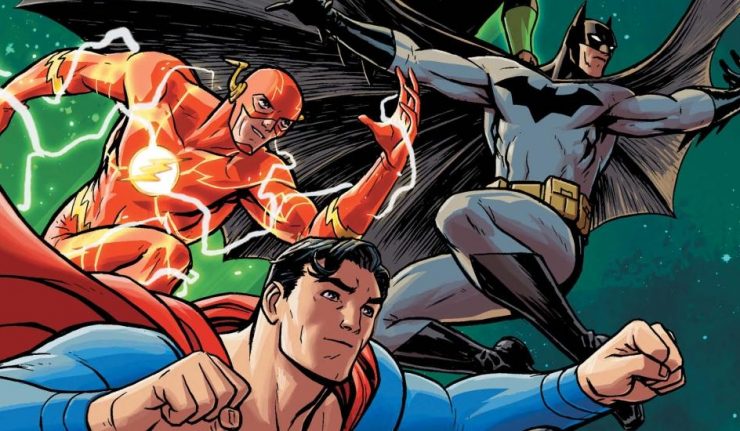 Justice League #51: At the mercy of the Black Mercy! As they return from their adventure on the planet Trotha, the Justice League crashes on the homeworld of the Black Mercy! There, they fall prey to the most powerful psychological threat they’ve ever faced! Written by Jeff Loveness, this two-part descent into the dark corners of the superhero psyche will unearth fresh horror.

In Justice League #51, Jeff Loveness has taken over the writing duties from Simon Spurrier. Loveness is providing a fill-in story before Joshua Williamson’s Death Metal tie-in story begins. I like that Loveness maintains a continuity from Spurrier’s run. His story starts with the League returning from their mission in space in the preceding storyline. Instead of the usual clean break that a new writer would typically start with, Loveness goes out of his way to connect his story to the previous.

Loveness also brings back a familiar threat to longtime readers – the Black Mercy. This is a plant that traps its victims in a false reality where their fondest desires are granted. The Black Mercy was introduced in 1985’s Superman Annual #11, written by Alan Moore.  Mongul used the plant against Superman, who experienced the life he might have lived if Krypton hadn’t been destroyed.

This time however, the Black Mercy is trying to trap all the Leaguers in its spell. We don’t see the specifics of the fantasies it offers, but Loveness gives the Black Mercy a voice in the form of the story’s narration. This is an intriguing device that conveys the plant’s seductive psychic enticements to the League.

The Black Mercy plays on the team’s insecurities, making them feel unsatisfied with the lives they have built, offering them a newer, better one. The plant offers them a chance to finally lay down their endless battle against evil, and move on to a happier life.

I was quite struck at the Black Mercy’s observation that even death does not provide the heroes any respite from their eternal fight for Justice. It tells them, “What will it take? To finally stop? To have an ending? Death? You’ve died before. And it was not enough. The story called you back. Not even death could free you”. And to underscore the point, we have panels showing the Flash, Batman, and Superman’s deaths, from which they each returned.

It also seems that the Black Mercy is concentrating on Batman. It’s quite likely that Batman is the most difficult mind for the plant to ensnare. Bruce has spent his entire life denying himself happiness in his war against injustice. The plant implores, “Bruce… why are you the one person you won’t save? “.

And the fantasy it concocts for Bruce is rather disturbing. You would expect that Bruce’s fondest wish might be to have his parents back, but the Black Mercy gives him this in the form of his mother’s animated corpse, still bleeding from the gunshot that killed her. This is a very shocking image, and I am interested to why the Black Mercy would choose this approach.

I can’t really find any fault with Loveness’ story or with Robson Rocha and Daniel Henrique’s art. However, DC really need to find a creative team to take over Justice League. Loveness’ story shows potential, but he’s only filling in until Williamson starts his Death Metal tie-in story. I think Loveness deserves a shot as the regular writer after Williamson’s story. Or maybe DC can convince Williamson to stick around for a longer run. But they have to stop treating their premier team book as a hot potato being passed from writer to writer.

Justice League #51 provides us an interesting tale. Loveness’ story might only be a filler, but I believe it shows Loveness has enough potential that DC should offer him this or another title on an ongoing basis. Justice League is one of DC’s most important titles and needs a talented writer to give it a consistent direction.