Boom Studios Review: Once and Future #10 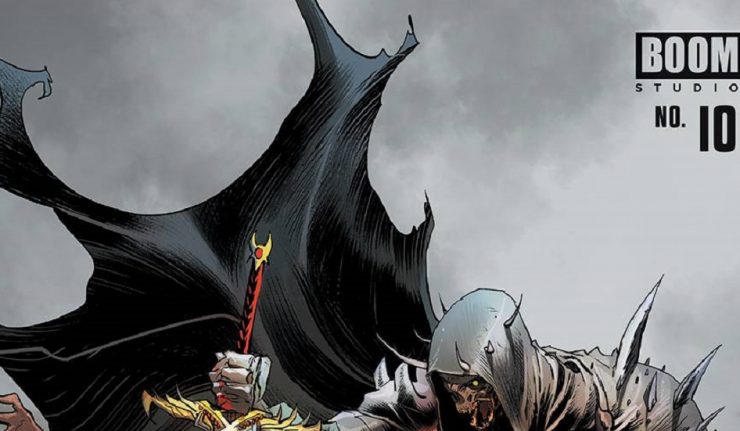 Beowulf appears on the scene and attacks Duncan and Bridgette, and Duncan crashes his car in an attempt to get free. Beowulf may be bigger and tougher, but Duncan is pretty clever, plus he has Bridgette with him, who blows up the big guy with a mystical landmine.

Meanwhile, we learn that Elaine has been working with Merlin, who is manipulating Arthur and messing with the Beowulf story. What is he up to? Duncan drops Bridgette off at her home, and she goes in and meekly tries to blend in with the other residents…for now.

Kieron Gillen has created quite the family story of grandson Duncan and grandmother Bridgette in their constant battle of dead Knights of the Round Table and other mystical creatures.  But what makes it work is the tough Grandmother and the milktoast Grandson who is steadily accepting his family’s mystical responsibilities.

In this issue the protagonist that fights with Bridgette is Grendel who is from the Beowolf poem…but in this case, a real realm.  Kieron Gillen does a great job weaving literature into current times with a family flare!  Superb writing!

The art!  The renderings of these characters by Dan Mora is akin to the Sean Murphy of White Knight fame or Dan Jurgens.  His pencils are strong and lend themselves easily to both run of the mill characters to super natural characters!

Once & Future #10 opens with a bit of relative normalcy, and it’s really pretty. Duncan is standing on the corner in front of a lovely old church, waiting for his ride that never arrives. To interpose this with a panel showing Bridgette watching TV calmly is so mundane, so much the opposite of the thundering action we’ve seen, that it’s oddly disquieting.

Grendel is another terrific monster to add to the line-up we’ve seen so far. He’s huge and inhuman, with an impossibly fanged mouth dripping blood much like his massive claws. This is a pretty graphic book, and it shows!

Once & Future #10 deftly juggles classic folk tales and poems in a modern horror setting in a  satisfying fashion. We follow the story, loving it as it goes off kilter and gets bigger, and then realizing that it sets us up yet again for a twist.  This is worthy of checking out! 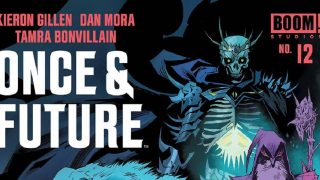