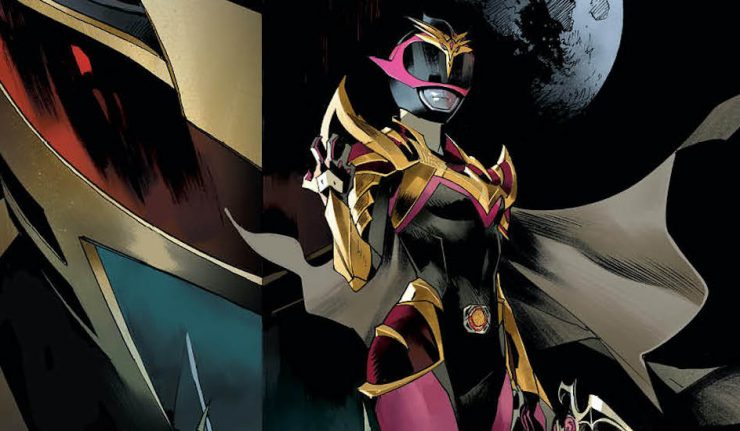 After the shocking events of Power Rangers: Ranger Slayer #1, Kimberly is determined to purge the terrifying hold that Drakkon has had over her world, starting with Deadlock; the prison tower where Drakkon held all those who opposed him. But even the Ranger Slayer has no clue of the true power kept in Deadlock—and what unlocking the doors will set into motion. As Kimberly investigates the worst of Drakkon’s secrets, she sets in motion Drakkon’s final plan—one that will pit her against a fan-favorite Power Rangers villain like you’ve never seen them before!

The cover by Jung-Geun Yoon is great. It nicely showcases the new design for the Ranger Slayer. And Kimberly sitting on Drakkon’s throne is an enticing image.

The interior art is solid. There’s a post-apocalyptic style to the art that works well with the story. It’s not overly polished. There’s a dirt and grime to it that is appropriate.

I really love the basic premise of this mini-series. Kimberly became the leader of this alternate Earth after Drakkon’s defeat. She’s trying to rebuild the world after Drakkon’s reign and she has to work with both her Ranger friends and the ones that worked for Drakkon.

Kimberly has a council that consists of Zack, Trini, Scorpina and Finster-5. It’s a fun group of characters to put together in this alternate world. Scorpina, especially, is a lot of fun. She’s a somewhat forgotten Power Rangers villain but was a major part at one point. So I enjoyed how big of a role she has in this. And she gets all of the best lines.

There’s this great moral dilemma for Kimberly in this. By taking over as leader, many view her as an extension of Drakkon. That’s not helped by her willingness to forgive and work with Drakkon’s former aliases and the fact that she also worked for Drakkon. It was against her will but that doesn’t matter to most people.

The main prisoner story that starts is also interesting. I assume that he will turn out to be a major Power Rangers character. There’s also set up for an alternate universe version of the Power Rangers in Space mythology so I’m curious to see how that plays out.

This is a fantastic issue. It’s a great start to the story. I love the set up and basic premise; it’s a really interesting story. The character dynamics are fun and interesting. Drakkon’s story never interested me that much but this issue hooked me in that world post-Drakkon.