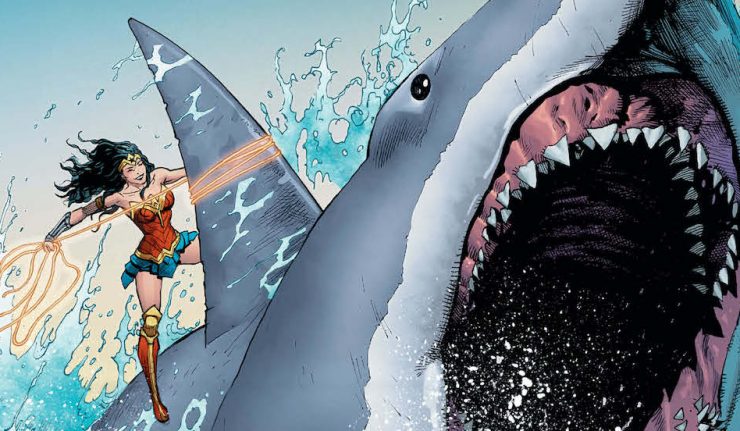 [Editor’s note: This may contain spoilers]

There’s something evil afoot in the heart of the Amazon rain forest, and Wonder Woman is on a mission to save the innocents caught in the crossfire! As a mass of dark energy envelops a pocket of the planet, Diana must use her golden lasso to keep tethered to reality as she ventures inside, or face being corrupted by the energy herself! But there’s more than just a battle with the Dark Fates at play here…something else lurks in the heart of the Amazon that will shape the future of the DC Universe for years to come…

Bryan Hitch and Alex Sinclair’s cover is cool. It invokes the the creepier nature of the issue well and looks good.

The interior art is also solid. Gabe Eltaeb’s colors are nicely vibrant. And Jack Herbert’s pencils are strong with a lot of definition and expressiveness.

Steve Orlando always writes Diana well. I think that the story is essentially Diana fighting for truth. And I appreciate that Diana gives the Fates a chance to surrender. She’s sympathetic and kind no matter what. It’s always an interesting dynamic to see played out.

Wonder Woman’s brother Jason was part of the set up for this issue so I figured he would play a part. And he’s not in the issue at all. Which, honestly, isn’t a huge problem for me because I never liked that character. I just thought it was strange that he was in the cliffhanger but then never played a part in this.

I don’t know how I feel about a third tribe of Amazons. It certainly is cool when creators add to the mythology but I’m not sure how much this will matter at all. It doesn’t appear to factor into Mariko Tamaki’s current run, at least so far. Maybe this is meant for a future event or Wonder Woman story. But with DC being in as much of a weird transition period as they are, I could easily see this going nowhere.

Overall, I was never all that invested in this issue. It’s fine; Orlando characterizes Wonder Woman well and the art is good. For me, it just never connected and I found it to be a little boring.