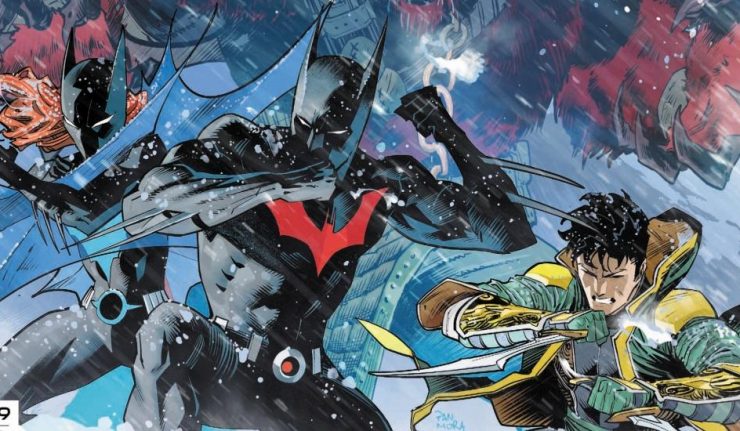 Batman Beyond #46: Mr. Zero’s plan is a success as weather around the world gets worse and a new ice age begins! Gotham is covered in a mountain of snow and ice-and the rest of the world isn’t much better. To set things right, Batman, Damian, and Batwoman Beyond must declare war on the League of Assassins!

In Batman Beyond #46, the future Bat-Family takes to outer space to stop Mr. Zero’s scheme to start a new ice age – or to high Earth orbit, anyway. Mr. Zero has constructed a crystalline shield in orbit that reflects solar radiation away from the Earth. The only chance Terry and the others have is to destroy the space station that is creating and maintaining that shield.

Although Damian is able to lead the team to a spaceship, it turns out that the spaceship was not Ra’s Al Ghul’s. Actually, it’s Bruce’s. Typically, Bruce has prepared for every eventuality, even the need for space travel.

There seems to be some friction developing between Damian and Elainna. Damian seems to be rather disdainful of the new Batwoman’s relative inexperience as a crimefighter, while Elainna is eager to prover her worth. Is this apparent hostility between them the start of a continuing feud, or the prelude to a romance for the pair. As far as we’ve been shown, Damian doesn’t have any current romantic partner in the Batman Beyond future, so that would be an interesting angle to explore. On the other hand, Damian is sort of an Uncle to Elainna, a romance might seem slightly incestuous, But they aren’t blood related, and have only just met – so maybe it’s not that objectionable.

Sean Chen’s art is pleasing to the eye, especially in the depiction of Elainna’s and Terry’s Batsuits. I find it somewhat striking that the colour scheme is reversed from modern day Batman and Batwoman, with Terry wearing black and red, while Elainna wears black and blue.

I also like the fact that Jurgens has chosen an alternate name for Mr. Freeze for a villain whose plan is to cause a new ice age. It makes a nice continuity with Batman history, without having to tie Zero directly to Victor Fries. This shows that Jurgens put a bit more thought into the character than simply recycling Mr. Freeze into a futuristic foe.

I don’t really have any complaints with this issue. Yet again, Jurgens has provided an interesting, action-packed story, which is superbly illustrated by Sean Chen. Batman Beyond #46 is another fine entry in a great series.

Batman Beyond #46 once again demonstrates why DC was wise to make him the caretaker of the Batman Beyond universe. Jurgens’ writing shows a respect for the original source material, but also isn’t afraid to further expand the mythos. This title consistently proves to be a worth continuation of the original cartoon series.