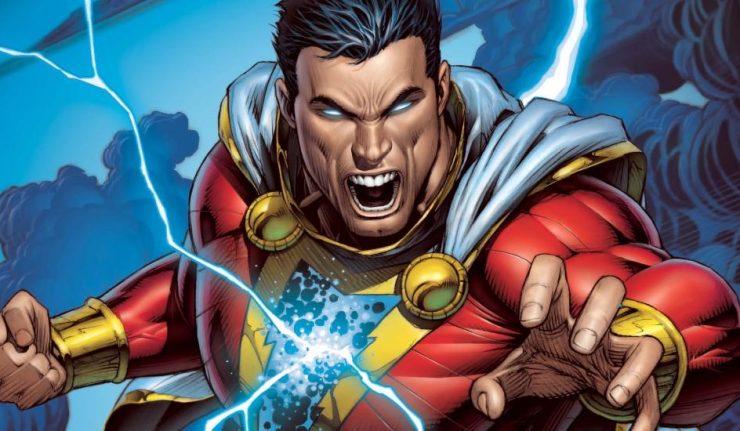 Shazam #14: After a night battling robots across the globe, Billy Batson finds out not everyone loves superheroes when one of his teachers unleashes a lecture on the ethics of unchecked power and privilege. It’ll take more than just the wisdom of Solomon for the teen hero to figure this one out.

Even though it’s only the penultimate issue of the series, Shazam #14 seems more like it’s the final issue. That’s because Geoff Johns provides an extra-sized final chapter to the storyline that has occupied the entire run of his series. The actual final issue next month is a separate story written by a new writer.

The main good thing about this book is that Johns does wrap up all the hanging plot threads, which is no mean feat, considering how much has been going on in this story arc. The threads may have been dealt with rather abruptly, but I wasn’t left wondering “but what about….?”.

I also do like the idea that Black Adam is meant to be the ultimate seventh member of the Shazam Family. It was nice to see the seed of Adam’s ultimate redemption being sewn in this encounter, with each beginning to recognize that the other is not the enemy they’ve assumed each other to be. I’m glad that Johns left the ultimate resolution to Adam’s acceptance by the family in the future, rather than forcing it to happen before ending his run on the series.

I should add that I found absolutely no fault with the artwork. Dale Eaglesham and Scott Kolins provided fantastic illustrations for the story. Regardless of the story, each single page was a pleasure to behold.

Unfortunately, even with the extra pages, there was too much going on in this storyline to devote much time to give each thread enough attention, even in concluding them. For example, the Shazam Family is faced with Mr. Mind’s Monster Society of Evil, a whole array of villains from across the various Magiclands. Yet, most of the battle happens off screen. Most of the battle we see focuses on the main baddies, Mr. Mind, Sivana, and Superboy-Prime.

The latter was particularly anti-climactic. Johns built Superboy-Prime up as a major impending threat. Unfortunately, the actual fight against him has to jockey for space in a single issue with multiple other storylines. That encounter should have had at least a whole issue devoted to it. Superboy-Prime has been a Crisis-level threat in the past, but is taken out in a few pages by two heroes.

And some of the dangling threads are dealt with in the narration captions, as if they were an afterthought. For example, the final disposition of the Magiclands happens in four captions in a single panel. Billy tells us, “Despite Adam’s warnings, I had made a promise to the citizens of the Magiclands that we would help them”. Then he briefly tells us of how their missions in the Wozenderlands, the Darklands, and the Gamelands, each in its own caption. The other lands don’t even warrant a mention.

My belief is that Johns should have focused the title mainly on Billy, with Mary and Freddy occasionally joining him. The other members should be kept in reserve for when force of numbers is necessary. And they should tackle a single threat (or at most two) at a time. And maybe the occasional guest star. Jeff Loveness proved this with his fill-in issue (#12) proves this point by focusing on Billy and guest star Batman against a single supervillain. One simple powerful story that didn’t try to pull the reader’s attention twenty different directions in the same number of pages.

When DC next tries to revive the title, I think they consider giving it to Loveness. His fill-in issue shows he’s got the ability for the job. But if Johns does make the attempt, he should keep the story more focused and streamlined than he did here. Also, he should make sure he has the time to devote to the title, as Shazam’s chronic lateness has merely compounded the difficulty of following his overstuffed storyline.

This review may sound somewhat harsh on Johns, but he has proven in the past that he’s capable of writing great comics. If he had devoted the time to keep the series regular, and hadn’t tried to cram several years worth of ideas into a single storyline, this could have been a truly amazing series. My hope was that in the next story arc, Johns might narrow the focus of the series to a manageable level. However, with the series ending next month, that’s not going to happen now.

Shazam #14 marks the end of an ambitious storyline where Geoff Johns bit off a bit more than he could chew. Extending the metaphor, Johns did finally manage to swallow it down. But it proved not to be as satisfying a meal as readers wanted. But don’t worry, Jeff Loveness is back next issue to provide us a the actual series finale as dessert. 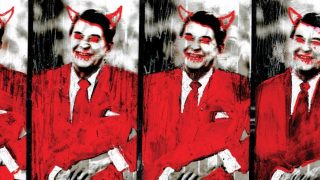