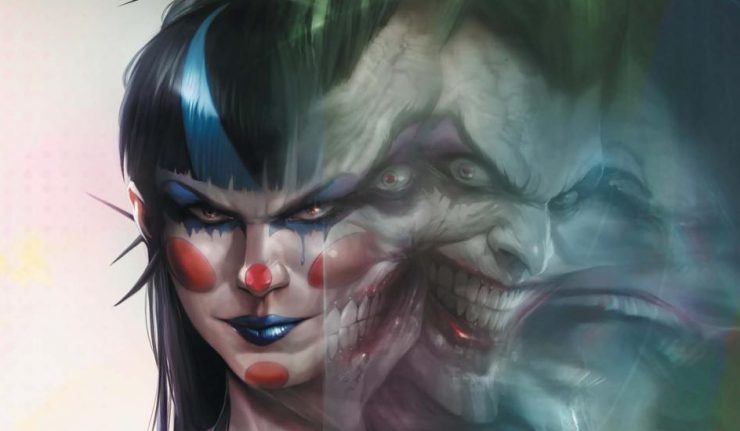 Batman #98: “The Joker War” part four of six! Batman is at his most vulnerable following a massive dose of an experimental new Joker toxin. With the Dark Knight haunted by demons and visions, it’s up to Harley Quinn to protect him while he recovers-because Punchline is on her way!

Batman #98 begins by checking in with Catwoman and the other Batman villains that have been laying low during “The Joker War”. I’m glad to see that Tynion hasn’t forgotten about Selina. It’s been a while since we’ve seen her, and I was afraid that Selina wasn’t going to return for a while. Instead, it seems she has formulated a plan and enlists the aid of Penguin and the Riddler. I find it rather ironic that Selina’s plan needs to be carried out by members of the Underworld United, considering that they were part of the plan that created the current situation.

I also quite liked the scene of Scarecrow and the Riddler playing chess. This vignette shows the difference in how the two villains operate. The Riddler is focused on the challenge of winning the game, while Scarecrow is more concerned with the psychology of the game and manipulating his opponent. As he says, “I’m not playing chess. I’m playing you“. I think this difference in approach also applies to their conflicts with the Batman. The Riddler is obsessed in showing that he is smarter than the Batman, while the Scarecrow attempts to psychologically manipulate the Dark Knight.

Meanwhile, Batman is fighting the mind-altering effects of Punchline’s drug attack with the help of a cure provided by Harley Quinn. Bruce finds himself talking to Alfred. While Alfred has some comforting words for Bruce, he also gives him an important kick in the pants – well, more of a literal slap in the face.

The image of Alfred is shocking and seems very much out of character for Bruce’s father figure. However, you have to remember that this isn’t the real Alfred, but a part of Bruce’s subconscious taking the appearance of Alfred. Plus, it’s an effective shock, that Tynion uses to make Bruce and the reader pay attention to an important point.

While Bruce is going through this, Harley has been fighting to keep Punchline from killing him. While they fight, Harley uses her knowledge of psychology to analyze Punchline makes a number of interesting comparisons between herself and the Joker’s new flame. Harley tells her, “We’re exactly the same, I thought Mr. J had a heart. You think he has a brain. But he’s not doing this for any of the reasons you think he is. He doesn’t believe in anything. He’s a manipulator”. While Harley sought a romantic connection to the Joker, Punchline thinks that she and the Joker are great minds that think alike. But the truth is that the Joker just used them both for his own amusement.

Bruce’s recovery allows for an awesome moment where he responds to Punchline’s disbelief at his quick recovery with “I’m…BATMAN”, with his name incorporated into the art itself by the masterful Jorge Jimenez.

Thanks to Alfred, Bruce realizes that he’s been pushing the Bat-Family away and sends out a call to them for help. When the Bat-computer asks who to call, he simply states, “I need everyone”. This hints at a reconciliation of Bruce and his allies in the issues ahead – as well as a massive team-up story.

I also loved Bruce’s joking name for a portable power pack he carries in his utility belt. As he tells Harley, “I call it a Bat-tery”.   It’s not a great joke, but it’s awesome to hear such a cheesy joke come from Bruce’s lips, as it shows that he’s rebounding from his period of self-pity and even starting to develop a sense of humour.

I couldn’t find anything negative to say about this issue. Batman #98 is Tynion’s best issue in the current run – so far, anyway. And Jorge Jimenez’s art has been impeccable.

Batman #98 is a standout issue in this subperb story. It makes me confident that Tynion has something truly amazing planned for the upcoming Batman #100 and beyond.