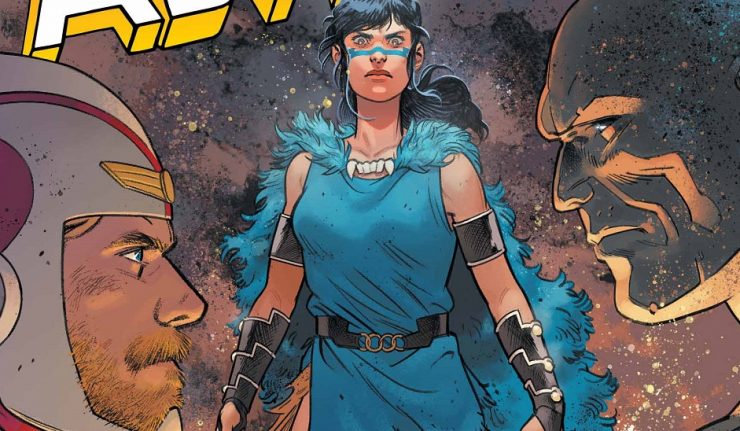 Just as things are heating up in Mr. Terrific’s investigation of Adam Strange, a Pykkt drone is identified in Gotham City by the Batman.

This nearly feels like a turning point chapter of the story as the complexity of the plot reveals itself even more.  Furthermore, King addresses some of the “troubling” aspects and manages to make them feel like they are part of the complexity and not an error or abnormal behavior for the characters.  Instead, there are a few layers of the onion being pulled back.  However, there are other elements that finally break through to create a new sort of concern.

As we glimpse the time Adam and Alanna spent on Rann in the cave of the rock people to prove themselves, in attempt to gain an alliance with this race, it becomes clear that the real message of this story may be about perception.  In the end, Alanna comes out realizing that she and Adam will persevere because they “always find a way.”  They don’t really need the help of these other Rannians.  She and Adam will figure out how to defeat the Pykkts and it won’t matter if these other Rannians help them or not.

Alanna makes a statement, and it’s obvious at this point that she’s been pressed to the wall, and while it seems a little harsh, it does tend to fit into that “war is hell” idiom.  People do things in war they would never otherwise do.  It’s that theme that is coming to the forefront in Strange Adventures #5.

Since issue #1, I’ve been troubled by Alanna’s smoking.  It just doesn’t seem to fit.  Well, it’s addressed in this issue in a way that gives an in-story explanation that makes enough sense to be believable.  Does it completely erase it as a possible clue that something isn’t right?  No.  But, it is done in such a clever way, that either way it goes it’s a wonderful bit of writing.  Alanna explains that it helps with the air on Earth.   It’s a subtle notion that the air on Rann is different enough to the air on Earth, even though they are both breathable by Adam and Alanna.

Sexuality is just dripping off Alanna in Strange Adventures #5.  It’s been a motif throughout the series, but it almost becomes a character in the story itself.  It’s easy to think of it as a traditional Science Fiction trope of the Earthman falling in love/lust with the alien girl.  Edgar Rice Burroughs’ John Carter of Mars series has a heavy undercurrent of this.  Alanna’s realization that the two of them as mentioned above will “always find a way,” echoes John Carter’s mantra of “I still live!”  John Carter always found hope in the hopeless situation believing that as long as he was still alive there was a way out of any given situation, no matter how dire.

It’s not entirely clear yet, but sex is either being shown in this series as a way Alanna is controlling Adam, or it’s simply an expression of their love for each other and their deep connection.  Why would you stop to have sex trapped in a cave for a month?  Is it their joy at finding water? Is it their belief that they will find a way together and it triggers those feelings of “oneness?”  Or, is it Alanna using it to cement her will over Adam…?

As for the plot itself, if there really is a Pykkt drone on Earth then it turns everything that’s happened so far on its side.  It begins to give plausible credence to what Adam and Alanna have been saying all along.  Is this a real pre-invasion Pykkt drone?  Is it part of some complex conspiracy being perpetrated to validate Adam and Alanna’s assertions?  The most beautiful part about it is that there are so many possibilities at play at this point that any outcome is not only possible, but that all outcomes are probable.  King has laid so many foundations that could go either way that he has not yet tipped his hand.  Anything can happen!

I would be remiss if I failed to mention the continued excellent work by Gerads and Shaner.  Their impact is felt everywhere, from the non-human aliens on Rann to imbuing Alanna with a disarming and classic sexuality.  It can’t be understated how much of an impact these artists have on the storytelling.  There are so many pages that are worthy of framing.  It’s interesting how Gerads approach looks more and more like commercial art from the 1940’s and 1950’s, even though he’s delineating the present day events.

There are Easter Eggs that will put a smile on your face as well!  Mann and Weeks- two streets in Gotham City, and comic book artists- Clay Mann and Lee Weeks- who’ve both worked with King at DC Comics.  But, General Kanigher has to be the best one.  Robert Kanigher was a prolific writer and editor for DC in the forties, fifties and sixties.  Probably known best for his work on Sgt. Rock, it makes sense he would be a General!

Let’s not forget the comic book artist quote this issue by Murphy Anderson!  Anderson worked on Adam Strange with Carmine Infantino in the pages of Mystery in Space, but throughout the DC line in the 50’s and 60’s.

“And you like to know that somebody out there appreciated what you were doing.  You know, you have a mixed feeling about these things as you are working on them.   And you have other things, obligations. on the other hand.”

That surely describes the “war as hell” situation described above.  It’s not too dissimilar a sentiment from Wally Wood’s quote in Strange Adventures #3.

It’s really a positive, but the exploration on points of view has rendered all concerns null and void….

This is without a doubt the most intellectually engaging comic DC has published since Watchmen.  It’s execution is at an extremely high level and is just as beautifully illustrated.  Strange Adventures #5 may not be the turning point of the story, but it is the moment that proves to be the most balanced on either side of the verdict on Adam Strange’s guilt or innocence. 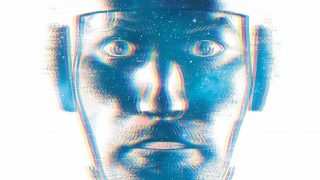