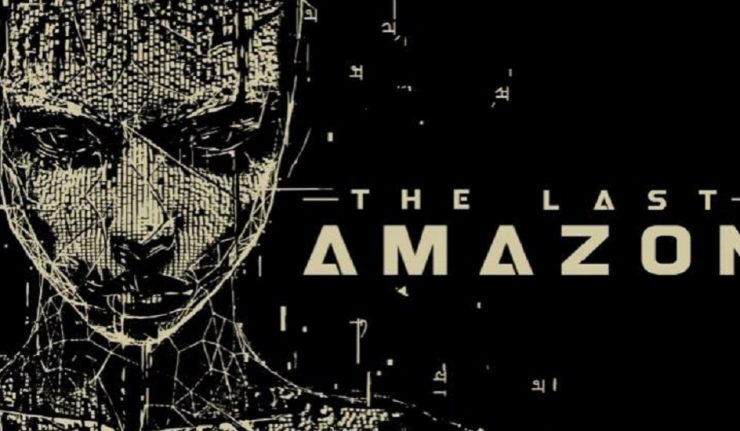 The year is 2050. In the wake of a worldwide nuclear holocaust, only two cities remain on our war-torn planet: The Denver Denizens and Hawaii’s Azureus Islands. Locked in a post-apocalyptic cold war, these two superpowers vie for control over earth’s few remaining habitable zones. Amid this global struggle, a desperate scientist risks everything to tip the balance of power by awakening a sentient technology which has the power to either heal our broken world or plunge all organic life into eternal darkness.

The Last Amazon was definitely a read I was unprepared for. With a unique perspective and a story that draws you in, this one came out of left field. An introduction to the world in the wake of a worldwide nuclear holocaust, 2050 is a year that looks dire for all. This book is a definite journey so let us dive right in and get into the meat of this review, shall we?

The Last Amazon begins by introducing us to Lex and Redd. Lex, to put it as simply as possible without ruining the story for you, is a presence in the network. Redd is a scientist trying to help Lex remember who she is and how she became in such a state. To do this, Redd uses news articles, websites, social media, and much more to help Lex not only learn the world around her, but to remember just who she is.

In 2050, the world has all but disappeared and there are only two major cities left. The residents of one call themselves the Denver Denizens and have thrived where they are, in part, by using hydroponics created by their leader, Rex Enton. They are staggeringly different than the other city, The Azureus Islands, which is more like the vacation hotspot in an apocalyptic world. Not surprisingly, the two cities are enemies and their voices echo those in reality today. It is almost unnerving as you read through some very familiar words in fights “online”.

As The Last Amazon continues on, we get to see that there is also a band of refugees, lead by a woman named Raiyn. She and her refugees, in a gambit called Raiyn of Salvation, are headed into Denver Denizens territory. This is causing quite the internal stir. The question is whether these are true refugees or is there malice involved?

As the story moves forward, more and more is thrown into the air. Was the government involved in the nuclear attacks? Were they behind it the whole time, spurred by something called FOXGLOVE? Who is Lex, really? How is Redd related to everything that has happened? Are the enhanced soldiers, known as Amazon Project, really there for protection? Who is Lex…and how is she connected to everything happening?

Give Me A Vector Any Day

I had the absolute pleasure of talking with my colleague Seth Singleton to two of the creators of The Last Amazon. Both Jamison Stone and David Granjo were incredibly passionate about The Last Amazon and just how much went into creating it. From beginning to end, The Last Amazon grabs you and delights. It has something, literally, for everyone.

With hidden jokes for comics fans, physics jokes, hidden codes, the feel of video gaming in a comic book…The Last Amazon covers so much ground. It is a dystopian sci-fi in which nothing is as it seems and danger looms more and more as you read on. Jamison Stone, David Granjo, and Carlos Cardona have succeeded beautifully in bringing us an experience like none other.

I one hundred percent recommend picking up The Last Amazon. Whether in digital format or in its glorious physical form, you will not regret it. This incredible story leaves you wanting so much more and I cannot wait to see what is to come next in the world of The Last Amazon. This one gets a five out of five for me, but I wish I could give it a twenty because it surpasses the comic genre and presents something brand new. A huge thank you to Apotheosis Studios and congratulations on your success so far in The Red Opera’s Kickstarter!

So, does The Last Amazon sound like something you would pick up? Because you definitely should. Let us know your thoughts in the comments below!