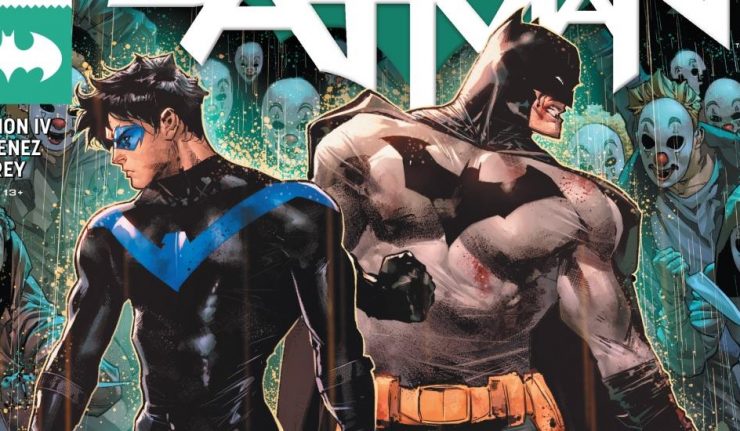 Batman #99: “The Joker War” part five of six! Things have changed, as Batman realizes he can’t fight this war alone. He’s going to need help. Before he faces down The Joker, he must call up his trusty partner Dick Grayson! But can Dick reclaim his lost memories in time to join the battle?

I’ve been enjoying “The Joker War” event so far, but Batman #99 completely blew me away! The Joker has stolen Bruce Wayne’s fortune, using it to terrorize Gotham City. He has used Batman’s tragic beginnings to attack him psychologically, as well as physically. But his most vicious move comes this issue, when he pits Batman against the reanimated corpse of Alfred. This is a move that would unnerve even the Batman. Will Bruce be able to bring himself to fight the man who raised him after his parents died? And if he does so, what will the psychological cost be?

Remember that shiny new Bat-suit that’s been having fans talking? It shows up again this issue, but it’s not Bruce wearing it. The Joker dons the costume, with a few adjustments to make it his own. The Joker wearing a Batman suit seems a bit over-the-top, but it is significant symbolically. Alfred created the suit for Bruce to wear in an ideal, brighter world. It represents the Batman that Alfred believed Bruce could and should eventually become. However, the Joker has perverted the costume. The Joker is tainting the memory of Alfred by profaning his dream of an idealized Batman.

Bruce calls in the Bat-Family to help him by taking care of the trouble in Gotham while he faces the Joker. It is interesting to see who does and doesn’t answer his call. Dick shows up, having finally regained his memory and having ditched the name “Ric”. We see a touching moment, where Bruce expresses, “It’s good to have you back”. Bruce tells him, “I think it might be time for a change of clothes”, giving Dick a proper Nightwing costume.

One important member of the family is missing however, which isn’t a surprise if you’ve been reading Teen Titans. Batman and Robin have had a falling out, with Damian renouncing his role as Robin. Batman will have to contend with Damian in the near future, but for now Damian appears to be keeping his distance from his father and the rest of the family.

Also, while Orphan and the Signal appear, I noticed that none of the other Outsiders came with them. I wonder what that portends for the upcoming finale of Batman and the Outsiders. Could it be that the Outsiders are disbanding, with the rest of the team departing Gotham?

I also quite liked the confrontation between Batman and Harley Quinn. For once, Harley is as rational and deadly serious. She has decided that Joker has to be killed once and for all. She tells the Dark Knight, “You know him as well as I do. He’s always going to one-up himself. And even if you take him down today… what’s the next step from this?! What kind of Gotham are you going to let him build next time?”.

But Batman, as always refuses. Killing anyone is anathema to him – even the Joker. Harley responds to this refusal with a deal: “If he kills you. I’m taking the shot. Ending it right then and there, and I don’t care about your stupid code or any of that…. I see him ready to pull the trigger, I will shoot him down”.. Batman verbally refuses these terms, but he doesn’t act to stop Harley. So is he tacitly accepting this deal?

I can’t find anything at fault with this issue. Tynion’s written an amazing story with fantastic art from Jorge Jimenez that leaves scant room for criticism.

Batman #99 is the best issue of Tynion’s run yet. With a set up like this, I’m really looking forward to reading issue #100. Kudos to Tynion and Jimenez on an amazing penultimate chapter of “The Joker War”.