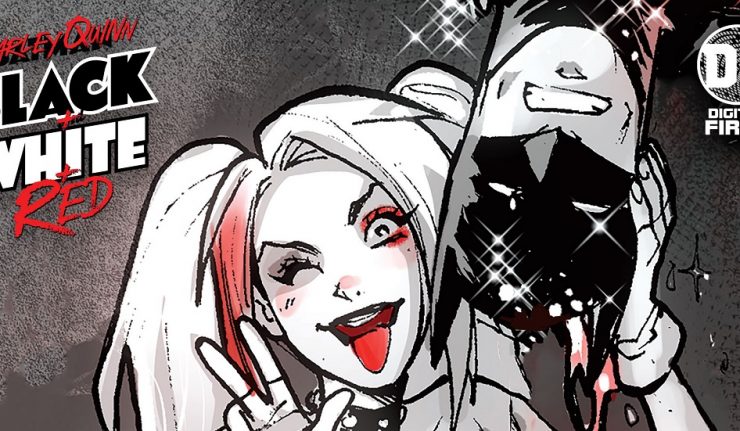 “Nobody has worked me like this since Puddin and I split.” – Harley Quinn to Catwoman

Chapter Two – “Fashion Victim”
It’s the world of social media and influencers.  And apparently Catwoman and Harley have entered the mix.  Who’s the real toast of Gotham?  The Cat or the Harlequin?  Is this about a few clicks on Instagram or a multi-million dollar heist?  Mirka Andolfo enters into Black+White+Red with her pen and paper.

I really enjoyed Šejić’s take on Harley.  Not that Andolfo’s is bad, but its back to the one liners and the voices in her head and the “Puddin'” references.  With the likes of the Murphyverse, Harley has matured a lot, but this issue was a throwback to where she has the sledgehammer and is talking to her stuffed animals as if they were real.

Cap that off with an adversarial run-in with Catwoman (who for a second, I was totally buying Selena in this role), and Harley becomes the comic-foil again.

If you like your Harley light…this second chapter is totally for you.

Mirka Andolfo‘s art – It’s messy.  It’s sketchy.  It’s perfect!  Again, if you like your Harley light… Andolfo has set you as the reader up for success as she plays with the black, white, grey and red perfectly.  That Batman Cameo… perfect!

For me, Chapter One set the bar high and portrayed Harley as being past the silliness, and moving on to her relationship with Ivy.  The art was so mature!  That’s the Harley as a fan I wanted.  But I do realize the lighter Harley has an audience that loves her quirkiness, her one-liners, and her “Puddin'” moments.  It’s just not for me when Stjepan Šejić provided me with her version of Harley.

Fifty-Fifty….Where’s Harvey Dent when you need to make a decision like this?  Light Harley or Serious Harley.  Either way you can’t go too wrong as there seems to be a Harley for everyone!