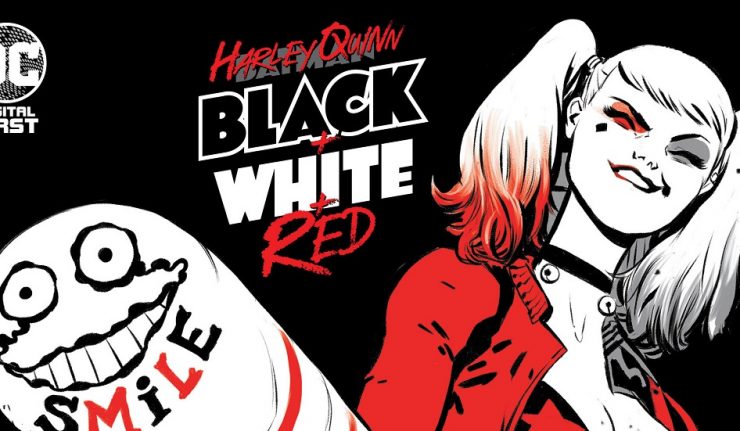 “Is she for real?” – Thug who knocks out Harley

Chapter Three – “Get Yer Story Straight!”
One Crime…Three points of view in how the hoods took out Harley to get a container of gas that Harley took from Joker.  Three points of view that center on Harley.  Same outcome, but different routes.  Did these guys smell the Joker gas?  Either way, in the end, Harley sets the story straight!

Saladin Ahmed works this Harley tale from an old school angle.  Three goons bragging in a bar about how they took out Harley Quinn.  Each agree on the beginning, but each has a different way the crime went down.  And each saw Harley in a different way.

The first incarnation is our old 1990’s Harley complete with the full Harlequin costume when she first came on the scene.

The second version of the story provides a version akin to Margot Robbie’s cinematic interpretation complete with fishnet stockings!

The third version is a Harley we have never seen before.  Is the gas leaking as Javier Rodriguez’s has nailed all tributes, but this third is a Harley LSD trip like no other.

It turns out that the final version of Harley is neither these goons’ “Ghost of Christmas Past, Present or Future!”.  This one has come back for vengeance and is a bit like her predecessors.