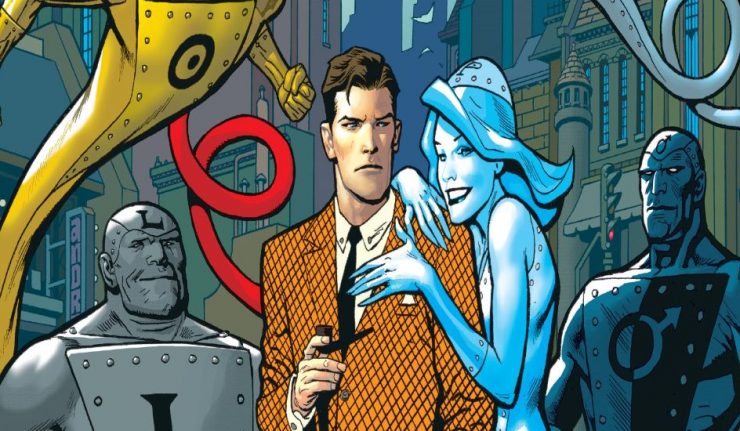 In this issue, it’s the startling secret origin of the Nth Metal Man! As Tina, Gold, and Nth Metal Man get sucked into the Dark Multiverse and taken hostage by a mysterious organization, it’s up to the rest of the Metal Men and Magnus to risk a one-way ticket there to save them! If the Metal Men don’t know that the Dark Multiverse is a result of their deepest, darkest fears come to life, can they even trust the person who has led them straight to this nightmare realm…Nth Metal Man?

Metal Men #10 is a visual feast like always. Shane Davis is special. I keep saying it and I will reiterate it here, the Metal Men must be hard to draw. They must be. They twist and turn and have to look both alive and robotic. I can’t even imagine the way that Davis figures it out, but he does and it is special. Colorist Jason Wright sparkles as well as each member of the team pops off the page.

Dan Didio had a plan. This book about the misfits of the DC Universe was supposed to be important. I am not sure that it will be, but it is fascinating to see what he had in mind. I can’t say that I love it, but I admire the scope of the project and I would have liked to see him have the chance.

Metal Men #10 is way too dialogue exposition heavy. There is a lot to unpack, but it is all told. Literally. Just told and told and told. It goes on and on. I think the book could have benefited from rolling some of this out over a few issues instead of packing it all into this one.

Metal Men #10 is extremely revealing. Who knew the Metal Men were so important to the history of the entire DC Universe? I surly didn’t. There is a deep, deep cut in this book all the way back to 1960. Clearly, Didio had big plans and this book is the last vestige of what that could have been. This issue is just OK. I really do feel the series took a turn a few issues back and the focus has changed. I am keen to see how it all works out in a few issues.