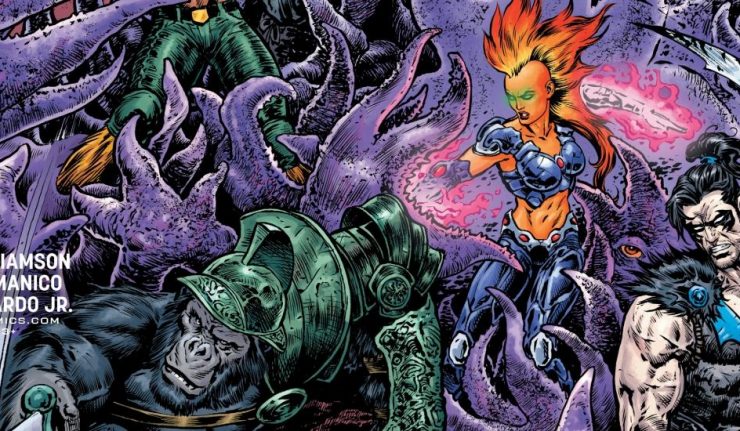 Justice League #54: “Doom Metal” part two of five storms the stage in this essential Dark Nights: Death Metal tie-in! It’s the Titans reunion you’ve been clamoring for when Starfire and Cyborg join Nightwing in this twisted Justice League. The team is hell-bent for Brimstone Bay to free the Legion of Doom, but what horrors and desires will the Valley of Starros reveal to them-and who or what is the villain named Mindhunter?

Justice League #54 is the second issue in Joshua Williamson’s “Doom Metal”, a tie-in story to Dark Nights: Death Metal. In this story, Nightwing leads a mission of assorted heroes and Lex Luthor on a mission to deprive Perpetua of the energy she is siphoning from the Legion of Doom.

I was wondering last issue why Cyborg and Starfire were featured on the cover when they weren’t featured in the story inside the book. They actually enter the story with the start of this issue, arriving on Earth via Boom Tube from the Ghost Sector (in Justice League: Odyssey #25).

There was one thing in this issue that has me particularly excited, even though it’s only a tiny part of the story. Kory and Dick speak briefly about the day they were in the Teen Titans together, along with Vic. This implies that Cyborg’s history with the Titans has been restored to canon. I wasn’t really happy with the New 52 retcon that made Cyborg a founding member of the Justice League. Not that I don’t think Vic is worthy of being in the League, but because it made a mess of Teen Titans history. I hope that this version of continuity remains when Death Metal concludes.

There are also some nice nods to Dick’s history in the delusion he’s subjected to by the Starros. Showing some of his previous costumes, even the original Nightwing outfit designed by George Perez. I still love that version of the costume, high collar and all. I also noticed the appearance of the classic Robin costume, which is hopefully also canon.

It’s interesting that Lex Luthor has joined forces with Dick’s team to oppose Mindhunter. Mindhunter is a Dark Multiverse Batman who used Martian DNA to give himself Martian powers. It’s a fascinating reversal, having Luthor attempting to undo the situation he created. And having to do so by facing a Batman who is very similar to the Apex Predator Luthor was.

I have to comment on how great Xermanico’s art is. I love his depiction of the Death Metal versions of these characters, as well as the classic versions shown in delusions created by the Starros.

And it’s great to see Alfred again, even if it was brief and ultimately an illusion. I wouldn’t be terribly upset if Death Metal retcons Alfred’s death away, even if it would be a deus ex machina.

I don’t really have any problems with this story, but I do wish that DC would find a permanent writer for the title. Justice League #54, like last issue shows that Joshua Williamson would be a great choice for the job.

Justice League #54 is another fine installment of Joshua Williamson’s Dark Nights: Death Metal tie-in story. Williamson’s “Doom Metal” clearly succeeds in adding depth to the overall event, and is worth checking out if you’ve been enjoying Death Metal.