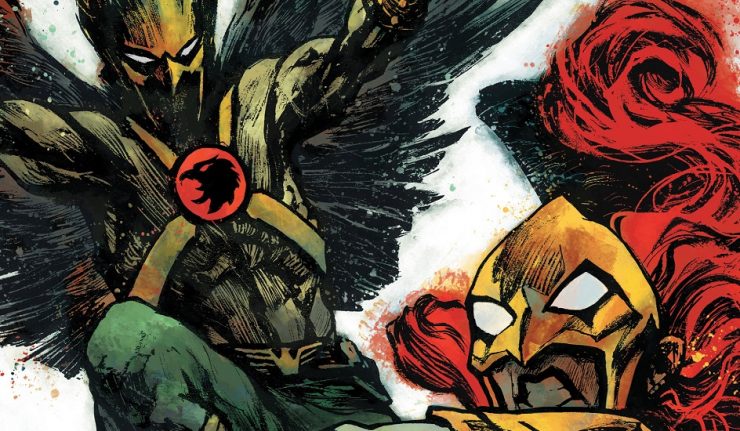 Carter and Shiera come face to face with Hath-Set, once again in the guise of Anton Hastor.  Hawkman conquers his fear of death, but at what cost?

One of the most interesting aspects of Carter and Shayera going back to their lives during World War II is seeing how Venditti approaches it.  Last issue, we saw bits and pieces that referenced Hawkman’s first appearance in Flash Comics #1.  In Hawkman #28 we get another glimpse of that story from Hawkman’s first appearance, and Pasarin depicts him exactly as he appears in Flash Comics #1.  Hawkman’s first artist was Dennis Neville, and Pasarin is clearly looking at it to make it appear as identical as possible.  Some of the finer details include the yellow circle where his straps meet on his chest instead of the more familiar red, with or without hawk emblem and the helmet as originally depicted.  The larger impact of this would seem to indicate that Hawkman’s past is exactly as we’ve seen it presented in Golden Age comics.  It also seems to fall in line with the decree that former publisher Dan DiDio made before his departure from DC Comics that “everything counts.”    If this is still the case, it remains to be seen.

Venditti always does a great job in telling a character driven story and this issue is no different.  Last issue, Venditti revealed that Carter was dealing with some feelings of fear.  Shayera confronts him directly and by the end of the issue he overcomes it.  It may seem a little quick, but the story Venditti tells requires Carter to make some quick decisions.  Additionally, Venditti writes Shayera wonderfully making her just as important as Carter, but perhaps even more intense and driven in this incarnation.  It represents a real world analog of husband and wife when a wife tells her husband she needs more out of him, not in a chastising manner, but in a supporting way, as only a wife can do.

The surprise ending falls into Venditti’s pattern of always finding a way to “up the ante” issue to issue.  This may be the biggest “ante” ever.  Don’t say I didn’t warn you!  I won’t spoil it, but it certainly doesn’t leave much room to go after this.  With Hawkman #29 being the last issue of this run on the character, one can only imagine how Venditti will pull a “hawk” out of his hat at the last minute…!

The art is as beautiful as ever.  This series has been blessed with some wonderful artists.  The final page of Shayera reacting and the “flashback” panels demonstrate these artists’ versatility.   In the same issue Pasarin, Albert and Von Grawbadger deliver a scene that is not only unmistakably from Flash Comics #1, but also imbue Shayera and Carter with all the modern emotion one expects from today’s comics.  Jeromy Cox goes with warm colors to amplify intense scenes and it works wonders for the understanding of the emotions in those panels.

The only negative is that this is the penultimate issue of this series.  Next month’s Hawkman #29 will be the last of this run.  It’s been DC’s best series over the two and a half years, and it’s not only disappointing that it’s ending, but confounding how it has not found a broader audience.

You didn’t think think this last arc would go out with a whimper did you?  Venditti and Company make Hawkman #28 an exciting lead in to the finale with beautiful art and a great character driven story that takes the character back to his origins in Flash Comics #1.  It serves as not only a statement on Hawkman’s history, but also his connection to Shiera/Shayera.  Even if you haven’t read any of the previous 27 issues, Hawkman #28 will make you a believer!