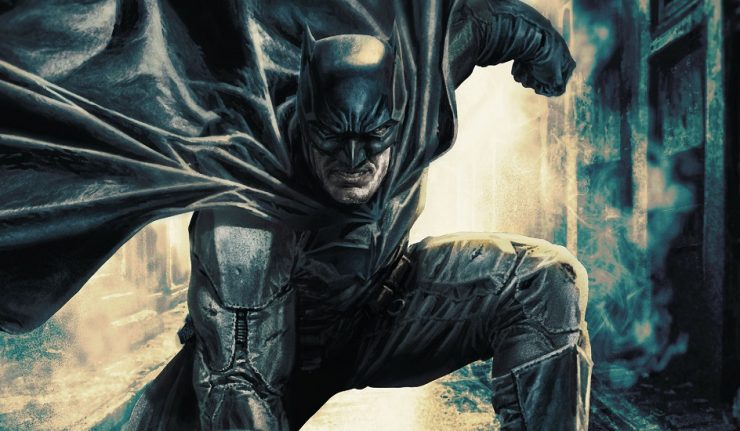 It’s a mystery only Batman can solve as a deceased policeman appears to be killing some of Gotham’s law an order types- a cop, a judge and a prosecutor.  But, who’s really behind it?

It’s nice to see the “detective” in Detective Comics come to the forefront and Detective Comics #1028 does just that.  Bruce uses some nifty gadgets and his razor sharp mind to lead him to the culprit in this one and done issue of Detective.  It’s a nice change of pace from the massive “Joker War” that just finished up in Batman last week.  However, it doesn’t mean this issue stands outside of continuity.  The ramifications of Batman #100 are felt in the story including the appearance of Officer Kakano who appeared in Detective Comics #1027 in the final tale which brought “Joker War” together with The Black Casebook.  With Nakano throwing his hat in the ring as a mayoral candidate, it’s obvious this is the first chapter of something much bigger.  However, it’s a throwback style of storytelling in which the chapter has its own beginning, middle and end and doesn’t feel like a clipped out section of a novel.

Nicola Scott does her usual wonderful pencilling job as well as providing the inks.  Scott makes everyone unique.  With Batman the only masked character, Scott has to make all the other characters recognizable through specific facial features, and she does an excellent job of it.  Additionally, there’s a great collaboration with colorist Trish Mulvihill.  Mulvihill has very painterly quality to her colors on this issue and it often takes the place of traditional shading.  There’s a gradual change in value of color to indicate depth, especially on a character’s face.  There’s a scene with one of Batman’s new gadgets, a portable x-ray machine that’s a really great example of using color in a different way.  The scene produces the “negative” images one expects from x-rays, but Scott and Mulvihill do it without any black lines.

Interestingly, there are a couple of references to Frank Miller’s The Dark Knight Returns in this issue.  Firstly, one of the police officers in the story is named “Varley.”  One can’t help think of Miller’s colorist, Lynn Varley when hearing the name.  Varley isn’t the only Bat-creator name dropped, the locale of Grant’s Bay seems to reference writer Alan Grant.  One should also recall that in the lead in story for this issue in Detective Comics #1027, there’s a street named after Jim Aparo.  The chase on horseback most vividly recalls a similar scene in The Dark Knight Returns.  It’s doesn’t seem like these are more than acknowledgements to influential creators, but they are fun.

Lastly, the villain of this piece seems to be visually inspired by the motorcycle gang in the iconic a-Ha video, Take On Me.  In previous issues of Detective Comics, Tomasi has referenced lyrics and albums from numerous artists.  This is the first time that there’s been a visual reference.  One wonders if this is Tomasi or Scott referencing the music video.

If there’s a negative for Detective Comics #1028, the resolution feels a little underwhelming.  While it’s nice to have Batman solve a crime with his detective skills and get it done in a single issue, the “surprise” reveal isn’t that surprising.  Thankfully, there is the suggestion that this is part of a much larger tapestry that has yet to unfurl.

While the reveal of the killer could’ve been more engaging, there’s a lot in this issue to digest.  Tomasi sets up what’s coming next rather well as Officer Nakano’s story will clearly lead to something.  The art from Scott and Mulvihill is really enjoyable as Batman moves beyond “Joker War,” perhaps into his past with the lead in to this issue referencing The Black Casebook!