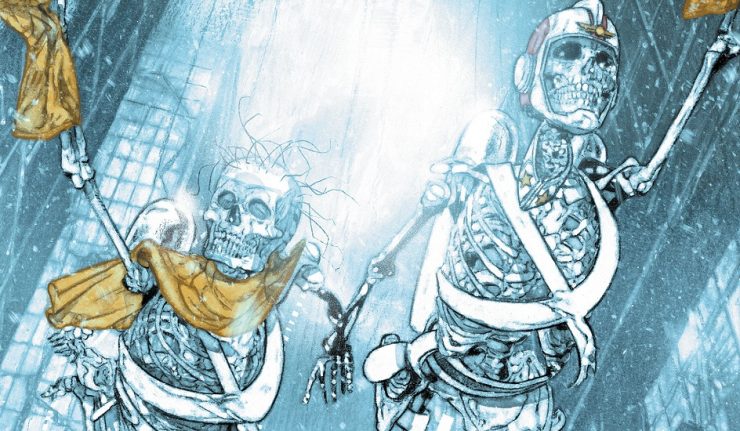 [Editor’s Note: This review may contain spoilers, but plenty of conjecture- You have been Warned!]

Alanna and Mr. Terrific finally have some one on one time and it’s hard to say who is more surprised- Alanna or Michael…or the reader…!

In the review for Strange Adventures #5, I made the statement that the issue felt like a “turning point.”  If Strange Adventures #5 was a 90 degree turn, then Strange Adventures #6 is a 180 on top of that!  It seems to happen on the last page, but in actuality it’s beautifully explored throughout the whole issue.  And, King has set up this issue along the way so that the subject of Alanna and Michael’s conversation isn’t out of the blue.  This issue shows why King chose Mr. Terrific to investigate Adam and Alanna, and it has less to do with his position as the world’s smartest man and more to do with the fact that they’ve both lost children.

Half of this issue is Michael and Alanna talking, and while one would expect that it’s going to be confrontational, it turns out to be remarkably more friendly.  Not only that, they both go into their stories of losing children.  Alanna recounts for the first time in the series how Aleea died.  Michael shares with Alanna the story of his wife, Paula and her death due to a hit and run accident and that she was 35 weeks pregnant at the time.  Fans of Mr. Terrific would do well to check out the recent The Terrifics to get a more complete picture of Michael’s life.

Alanna’s account of what happened to Aleea is set up by the flashback sequence in this issue during the Pykkt war on Rann.  And, while it’s beautifully subtle, it seems there can be no mistake about what King is suggesting.  Since issue #1, I’ve suggested that maybe Alanna isn’t Alanna…well, now I’m thinking maybe Adam isn’t Adam….!  Alanna has so far seemed like the one who’s in charge and has all the bases covered.  However, Mr. Terrific has figured out something and he’s been sure of it for a while.  He doesn’t believe Aleea is dead.  What he does wonder is how Alanna hasn’t figured it out!

There are two quotes in this issue worthy of mentioning…the comic artist quote is from the great Marie Severin and it references directly how Alanna describes Rann’s actions in the war…imagine….

“Yeah.  It’s one thing to tell a joke about it, but it’s another thing to spend your whole day doing a mass-murder and dismembering scene and, you know, it’s not exactly uplifting.”

Alanna says, “I’m ashamed of our actions, but not afraid of them.”   She knows they had to do what they did in war, but knows that some of the things they did were shameful.  It’s the part of war no one wants to admit.  It’s the part that has to be endured, and no matter how necessary, they won’t be remembered as one’s best days, sic. “not uplifting.”

For the final quote, it’s clear at the end of the issue that John Dunne’s bell is tolling for Alanna.  Perhaps, you know the quote from Hemingway’s For Whom the Bell Tolls, or Rush’s Losing It, either way, Alanna is the one who hears the bell this time despite believing she’s beyond it.

These aspects all add up to a tipping point of real human emotion.  King goes deep and wide.  There’s such a sense of fear and confusion on Alanna’s face as she perhaps begins to realize what Michael is suggesting.

Mitch Gerads gets the present day section of the issue and does a fantastic job communicating emotion with body language and facial expressions throughout Michael and Alanna’s time together.  He gets every aspect perfectly as the images masterfully reflect what is going on, even if it isn’t what the character is necessarily saying.

As always, “Doc” Shaner gets the flashback sequence and he does an equally amazing job doing the same.  As the series has progressed, the flashbacks have required more subtlety as it’s becoming increasingly clear that what happened in the past isn’t all bright, shiny and Silver Agey.  However, Alanna’s blue head to toe suit that matches Adam’s classic uniform is absolutely brilliant!  It not only echoes that Silver Age quality, but reinforces the relationship between the couple that is the basis of the strip.  They are equals…even if it isn’t always apparent.

No negatives, even when it seems like it could be a negative…it turns out it’s not.

For the past few issues, each subsequent issue has surpassed the previous one.  It’s the case with Strange Adventures #6 as well.  King has set up the reader to believe one thing and then turned things around to something unexpected.  The use of real human emotion is what makes this series so engaging.  These are emotions that anyone can relate to that has nothing to do with the ostensible science fiction genre.  Do yourself a favor and pick up this series.  It’s not too late.