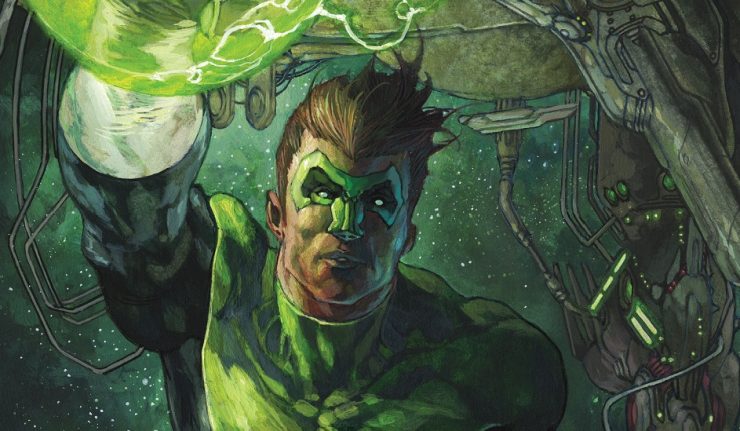 The battle comes to Qward with Hal facing Weaponer 666, but it’s bigger than that with Sinestro playing a role as well.

As always the art looks great!  Sharp and colorist Steve Oliff seem to be working more as a team with Oliff utilizing a painterly approach to the colors.  It not standard coloring one finds in a comic, but rather more like a painted graphic novel such as Morrison and Dave McKean’s Arkham Asylum.  Some of these images are truly stunning!

The strongest theme of this issue is that of love versus pain.  Weaponer 666 is aligned with pain and the suggestion of love is the opposite.  Hal extolls the idea of mercy to the Weaponer explaining that true mercy (love) would be to kill him…but, he doesn’t.  Because of the reverse nature of the Anti-Matter Universe, Hal’s instincts aren’t actually what would be true mercy.  It sounds wonky here, but in the issue it works well as a moment between the two.

Morrison uses a backwards storytelling motif for The Green Lantern: Season Two #8, and unfortunately, it doesn’t really work as well as it could.  It doesn’t help that the whole issue is filtered through a sort of reverse mindset as well.  Morrison is trying to make this a character issue for Weaponer 666, and while it’s clear how it fits into the overall narrative, it’s clearly difficult to make Weaponer 666 relatable.

Sinestro makes an appearance in the issue as well, and while his presence on Qward is not out of context, his role is somewhat strange.  At one point he attempts to get Weaponer 666 to understand what it’s like in the Positive-Matter Universe- something completely opposite to the wiring of the Weaponer’s emotional makeup.  While it seems to paint Sinestro positively and it’s always interesting to see Sinestro be a morally ambiguous character, Morrison also seems to suggest that there’s some sort of romantic relationship between the two.

This comes across awkwardly mainly because it comes out of nowhere in terms of Sinestro’s established characterization.  Instead of being a tender moment between the two characters that could work to move one’s emotions, it just comes off as confusing and bizarre.

This second season of Grant Morrison’s Green Lantern has not been nearly effective as Season One.  The Green Lantern: Season Two #8 takes things a step backward as it doesn’t quite deliver on things as effectively as it could.  Issue #6 remains the high point of Season Two, with issue #7 coming in at a close second.  Morrison aims high with issue #8 but doesn’t quite connect with the audience.  There are seeds of greatness therein, however the form distracts from the message instead of enhancing it.