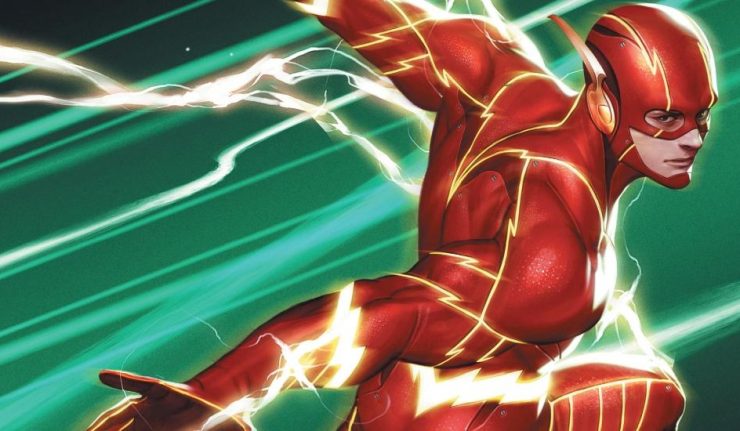 The Flash #763: The secret history of Barry Allen’s Flash ring is revealed as the Scarlet Speedster tangles with the Trickster in a tale that starts out as fun and games but ends with a last-page cliffhanger no reader will see coming. Don’t skip to the end! Don’t spoil it for friends! Don’t miss this inaugural issue of The Flash by the new series team of writer Kevin Shinick and rising-star artist Clayton Henry.

I have to admit that I had some trepidation before reading The Flash #763. After all, this is the first issue of The Flash in 4 years not written by Joshua Williamson. Williamson’s epic run sets a high bar for any new writer. And considering that I am unfamiliar with Kevin Shinick’s writing, I didn’t really know what to expect going into this issue.

So, did he blow Williamson away? Well no, but he did a respectable job for his first issue. He chose to start with a fairly straightforward story, pitting Barry on a single-issue adventure against a relatively minor, but familiar Rogue: the Trickster. Williamson created an epic story spanning over 100 issues, so a bit of a breather before pitting Barry against his next major crisis is welcome.

I also like that Shinick briefy acknowledges what has gone before by showing a newspaper headline referring to the events of “Finish Line”. By doing so, he is signalling that although he is starting a new era for the Flash, he is aware of what has gone before and is building on that. He’s not throwing out the character development Williamson put into the character and using it as the foundation for his own story. To keep with the racing metaphor, Shinick has taken the baton from Williamson and has started his leg of the race.

We also get a hint of what’s Shinick has planned for the Flash in his next storyline. He has picked Doctor Alchemy as the first major villain to pit against Barry. This seems to me the ideal choice. Alchemy’s powers make him a formidable challenge. But more importantly, Williamson never used him as a villain. In fact, I think his last encounter with the Flash was when Wally was the DCU’s main Flash. It’s probably for the best for Shinick to avoid comparisons to Williamson this early on in his run.

Shinick also makes his first story a noteworthy one by revealing the origin of a facet of the Flash mythos that hasn’t been explored before – Barry’s Flash ring. In the course of the story, Barry’s ring is stolen by the Trickster. After the conclusion of the story, Barry tells Iris why the ring means so much to him.

Now this brings to mind the only quibble I have with the story. Barry apparently melted down his parents’ wedding rings to create his Flash ring. Barry states that his father’s ring was just gathering dust while he was in prison, but wouldn’t it still be his property? I would expect that it would have had sentimental value to Henry Allen. Wouldn’t he want it back once he finally gained his freedom? Perhaps Shinick should have included a mention that Henry gave the ring to Barry to use or dispose of as he saw fit.

Also, Iris is struggling to understand why the loss of the ring matters to Barry. So she asks, “It’s just that you have other Flash costumes. Can’t you speed into one of them like Wally does?”. I hate to nitpick, but that’s not what Wally does. Wally creates a costume on the fly out of the Speed Force itself. This came up during Williamson’s run, and Barry acknowledged that Wally had taught him how to do this as well. However, this is a pretty minor mistake and doesn’t really affect the plot, as Barry still has a sentimental attachment to the ring, even if he doesn’t actually need to use it.

Well, I wouldn’t go so far as to say that Shinick has proven himself as steward of the Flash mythos. But he has made a good start. This was a serviceable first outing, providing an entertaining tale. Most importantly, Shinick has shown that he has the potential to provide some great stories. I’m sure that as he settles into his role, he’ll prove he’s up to the job.