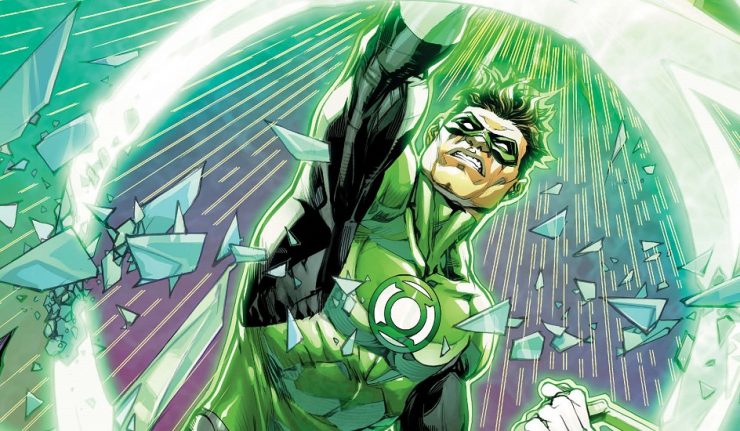 The Green Lantern: Season Two #7 comes together nicely as it references all the bits and pieces Grant Morrison has been seeding throughout Season Two.  It’s not always seemed to work, but here the pieces come together in a nice way.  Most importantly, Morrison is commenting on the universal concept of “being human.”  It a clever science fiction point-of-view switch around.  Often, the human has to learn the ways of an alien culture.  Here, Morrison turns it around and the Young Guardian has to see what “being human” is like.  It’s a well executed sequence that makes the reader think, and more than likely moves the soul a bit as well.  Presumably, the reader will now examine the aspects of his or her life that seem incongruent, and make peace with how these antagonistic characteristics make up the whole of one’s personality.

Morrison brings in the entire emotional spectrum to explain how humans have so many facets to their personalities, and he uses it to great effect as he pairs one of Hal’s past girlfriends with one of the colors of the spectrum.  This explains why we’ve seen so many of Hal’s old flames, like Olivia Reynolds in this series and Season One with Eve Doremus.  Morrison also seems to suggest that Multiversal versions of Hal are part of these facets.  He shrewdly shows the Star Sapphire (Carol Ferris) from Earth-11 seen in Season One #11 to cement this concept.

The point of the Young Guardians, which were introduced in issue #1, finally becomes apparent.  Obviously, they weren’t a throwaway concept, but The Green Lantern: Season Two #7 makes use of them in an important way.  They challenge Hal differently than the “old” Guardians.  Additionally, its sets up a reverse relationship than which Hal had with the “old” Guardians.  Morrison has demonstrated that the “old” Guardians of the Universe knew Hal well enough to predict how he would “freestyle” in order to get things done.  These Young Guardians don’t have the knowledge, foresight, or pattern of thinking to understand that Hal will always be Hal.  As Ganthet travelled with Hal and Oliver (Green Arrow) Queen during the landmark, “Hard Travelling Heroes” era, the Young Guardians will only learn by experience.

The end of The Green Lantern: Season Two #7 sets up a confrontation with Qward.  It seems only natural that Hal would  eventually face the Weaponers of Qward.  Krona even gets a mention, which recalls the origin of the Multiverse.  This time the Silver Age concepts bring the proper nostalgia coupled with an excitement so far missing from this series.

Last issue brought new life into this series, and this issue is clearly the best issue of the series so far.  Hopefully, everyone is able to make the connections and follow the bread crumbs Morrison has left.  If there’s a negative, it may take a “one and done” reading of this series to experience it properly.

As a single issue, The Green Lantern: Season Two #7 is easily the best issue of the series.  Reading of the first seven issues (and Season One?) may be necessary to reveal how Morrison is connecting the dots.  Nevertheless, this issue goes deeper and provides an insight heretofore unseen in this series.  Morrison is bringing the bits and pieces together to make something thoughtful and exciting.