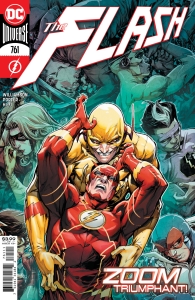 The Flash #761: “Finish Line” part three! It’s the Flash Family versus the Legion of Zoom! Witness the biggest battle in Flash history as the two sides go head-to-head for the fate of the future! Can the Flash stop the unstoppable Reverse-Flash from dragging him down into a personal hell Barry Allen can never escape?!

In The Flash #761, Joshua Williamson treats readers to a massive Flash Family reunion, with the Flash’s friends, allies, partners, sidekicks, and counterparts from various times and alternate realities. The issue begins with John Fox, the Flash of the 853rd Century telling his new Kid Flash about the day “that changed the Flash forever”.

That day is the present day, where Barry and the Flash Family are facing an array of Barry, Jay, and Wally’s foes. The heroes are overwhelmed by superior numbers, so Max Mercury puts out a call for the wider Flash Family to come to their aid.

There are some deep cuts into Flash history and some unexpected appearances. I didn’t expect to see Jay Garrick from the New 52 title Earth-2. I was delighted to see Wally’s children, Jai and Irey Allen. Jai appears to be using speedster powers here, so I wonder if his powers have changed, or if Irey is sharing her speed with him, as we saw her do in Fast Forward.

I also love that Irey calls Bart out for “stealing” her costume. This is a callback to The Flash: Rebirth miniseries. During that story, Irey had adopted Bart’s Impulse identity after Bart had become Kid Flash. I’ve always been a bit disappointed that we didn’t get to see more of Irey as Impulse before she was seemingly wiped out of continuity by the Flashpoint.

I have been somewhat disappointed that Williamson wasn’t able to include Wally as a part of this all-out epic Flash story. Unfortunately, Wally’s story goes straight from Flash Forward into Dark Nights Death Metal, precluding his appearance here. But Williamson found an ingenious way to include Wally. Even though he doesn’t actually appear, he does play a vital role in stopping Thawne.

Thawne is about to strike a killing blow on Barry, when he is stopped by a bolt of blue energy as Wally’s voice implores, “Find me, Barry! Find me…”. Also, a caption directs readers to Death Metal for the full reunion with Wally. This shakes Thawne’s confidence, causing him to flee into the time stream, with Barry right behind him.

The younger heroes find a way to return each villain to their proper time and place, leaving just Eobard Thawne himself for Barry to settle with. However, John Fox has an ominous pronouncement regarding this encounter, stating that, “This was the last time Barry Allen and Eobard Thawne ever raced.

I couldn’t find any fault with this story. In fact, despite my high expectations for this story, Joshua Williamson and Howard Porter still managed to exceed them. 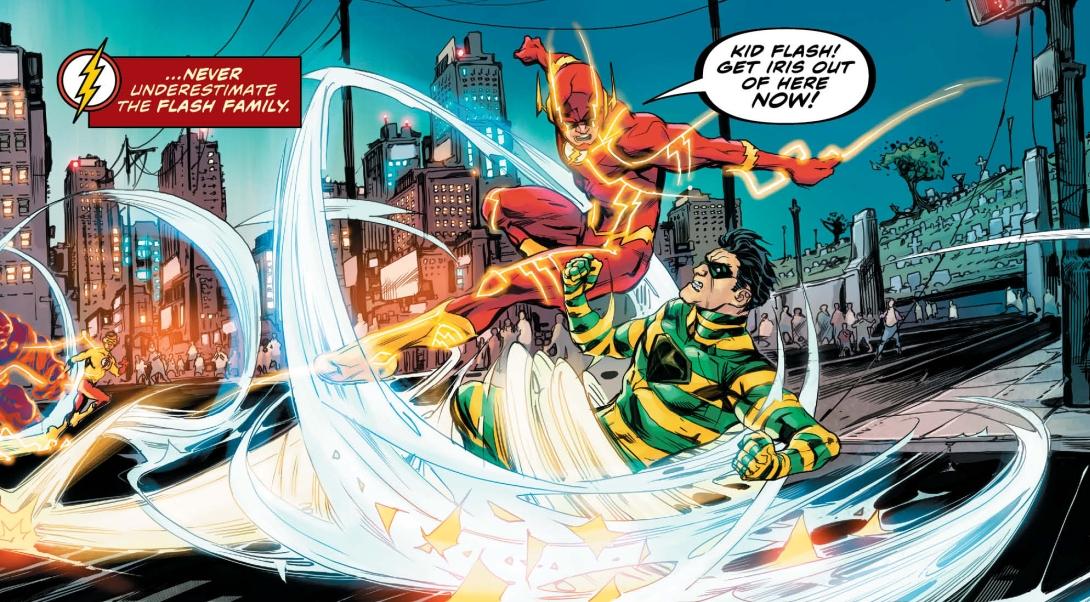 As expected, Williamson delivered another fantastic chapter of the “Finish Line” story in The Flash #761. There’s only one more issue left in Williamson’s epic run on The Flash, which is sure to be an amazing finale to this stellar story. But be sure to also check out Williamson’s Dark Nights Death Metal: Speed Metal #1, featuring Barry, Jay, and Wally finally reunited.