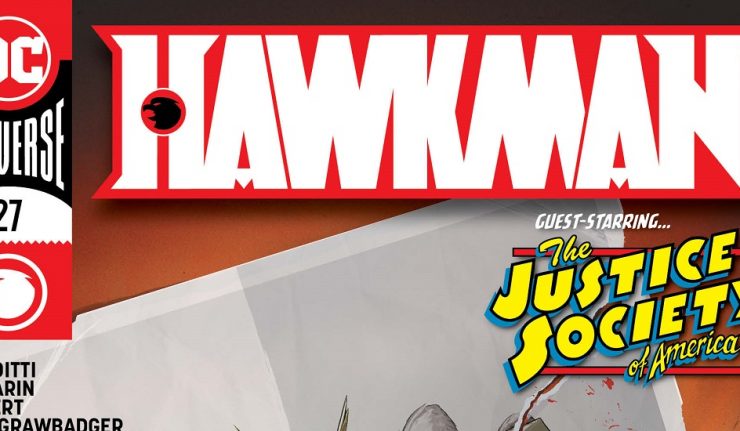 The Hawks find themselves back in the 1940’s with the Justice Society of America facing off against the Injustice Society.  During the battle Hawkman discovers something he’s never felt before…

Fantastic script by Robert Venditti?  Check!  Beautiful art by Pasarin, Albert and Von Grawbadger? Check!  Lush and evocative colors from Jeromy Cox?  Check!  Precise and clever lettering by Rob Leigh?  Check!  While we are used to these things in Hawkman, Hawkman #27 presents something not seen in quite a while- Carter and Shiera along side the Justice Society of America!  This alone is worth a 5/5 score.  But, let’s at least look at the details….

The Justice Society of America is the first superteam, and Venditti acknowledges it with Hawkman’s dialogue in this issue, cleverly referencing his history, “I’ve fought alongside every roster of every team imaginable.  The original is still the best.”  These are words that make a JSA fan giddy with delight!  Along those lines, Hawkman narrates the fight with his assessment of his teammates, lauding them with superlatives.  Alan Scott- Green Lantern, Jay Garrick- the Flash, Wesley Dodds- the Sandman, Ted Grant- Wildcat all get a moment to shine as Venditti encapsulates prescient character points. It’s a wonderful introduction for the uninitiated.

Venditti has made his mark with strong character focused stories, Hawkman #27 is no different.  Behind the joy and excitement of seeing the JSA in action, Venditti pushes Hawkman’s story further demonstrating that after the events of last issue, he is now afraid of death.  Character is always the driving force and it makes for meaningful storytelling.  Like so many times before, Venditti finds a way to take each issue to another level.

Behind Hawkman’s fear is another story- the Hawks mortal enemy, Hath-Set has become aware of Hawkman’s fear and hesitation in battle.  For those not in the know, Hath-Set is the Egyptian who killed Carter and Shiera in their lives as Khufu and Shiera in their incarnation in ancient Egypt.  This takes us back to Hawkman’s first appearance in Flash Comics #1, January, 1940.  This connection is reinforced as the Hawks realize that though they see themselves in their current incarnation, everyone else sees them with their original Golden Age look, a blond Carter Hall and Brunette Shiera Sanders.  Pasarin even does his best Sheldon Moldoff in this panel.  This is a proper honoring of the past!

If there’s a negative in Hawkman #27, and I’m not necessarily saying there is, it would be with the continuity of the JSA.  I can’t recall a time in the 1940’s when Ted Grant and Sandman, let alone Sandman in his original costume were on the team at the same time.  Wildcat didn’t join until All-Star Comics #24 and Wesley Dodds’ last appearance in his original costume in the series was All-Star Comics # 9 and his last appearance with the team was in issue #21.  It’s not clear when this story takes place, so there is a bit of retroactive wiggle room available, but for a long-time fan of the JSA, these things are noticeable.  Also, it could indicate that there is something else above and beyond accepted continuity transpiring.  Hmmm…..

Hawkman #27 is a must buy issue for fans of the Justice Society of America.  You won’t be disappointed.  Hopefully, this is the introduction of the JSA for a new ongoing series by Robert Venditti.  It would be especially wonderful if it took place in the ’40’s.  Perhaps, there is a place for a new World War II era continuity.  It’s hard to let the original go due to the work put in by Roy Thomas in the ’80’s on All-Star Squadron, but if anyone can do it, I trust Venditti.