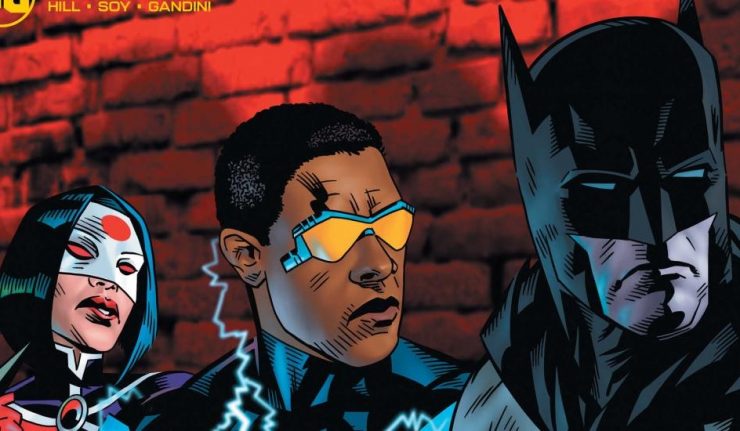 Review: BATMAN AND THE OUTSIDERS #16

Batman and the Outsiders #16: t’s the last chance for the team to save the world-and to save Orphan and Signal from giving their allegiance to Lady Shiva! Plus, will Katana’s Soultaker sword finally break for good? Will Black Lightning give off his last spark? And will Batman be able to destroy Ra’s al Ghul’s weapon?

Batman and the Outsiders #16 brings us the final confrontation between the Outsiders and Ra’s Al Ghul and his League of Assassins. While Batman is the book’s title character, Black Lightning is the star in this issue. In the end, it falls to Jefferson to battle Ra’s one-on-one while the other heroes deal with his henchmen.

I love that Bryan Hill has established Black Lightning as one of DC’s most powerful characters. Batman reveals that he’s always seen this potential in Jefferson: “You should be standing next to Diana and Clark. I’ve always known that”. DC has had some struggles to introduce diversity to the DC Universe, and I feel that this is one of their success stories. Black Lightning has always been well-received character, so bringing him to the forefront as a major power in the DCU seems an organic evolution of the character.

Also, this story sets Ra’s Al Ghul up as an archenemy for Jefferson. Ra’s threatens, “I will take all shelter from you. I will aim my war at you! From this day, you will never know peace”. Batman has enough villains left in his Rogues Gallery to contend with. I don’t think writers will feel limited by Ra’s focus shifting to Black Lightning. And even so, there’s no reason why Ra’s can’t still have the occasional run-in with the Dark Knight, even if he’s attention is primarily on a new foe.

Batman also seems to be hinting that he’s about to leave the Outsiders in the hands of Jefferson. Bruce tells him, “Sofia still needs guidance. Duke. Cassandra. Katana. You can give them something I never could”. He also tells the team, “You don’t need me now. I’m not sure I ever did”. The closing caption says “Next: Outsiders no more!” but I suspect it might be “Batman and the Outsiders no more”, with the Dark Knight bowing out and letting Jefferson fully take on the role of leader.

I am also intrigued by Bruce’s mysterious statement to the team, “I have one more request for the Outsiders… I’ll tell you when we get to Gotham”. Unfortunately, Bruce leaves us hanging. We’ll have to wait until next month to find out what his request is.

Once again, I have to praise the artwork of Dexter Soy. I love his depiction of the various characters. His depictions of Batman and Black Lightning show the characters at their iconic best.

The only issue I have with this storyline is that it took nearly the entirety of the title’s run to reach its conclusion. I really would have liked to have seen what other adventures Hill had in mind for the team. It seems to me that there is a lot of unresolved business for the team in Markovia. Hopefully, DC won’t leave the Outsiders lie dormant for too long.

Batman and the Outsiders #16 is a great final installment to the Outsiders’ war with Ra’s Al Ghul. I love the focus on Black Lightning, especially. Considering that he’s got his own TV show and that he’s now one of the major powerhouse heroes in the DCU, perhaps it’s time for DC to consider giving him his own regular series.