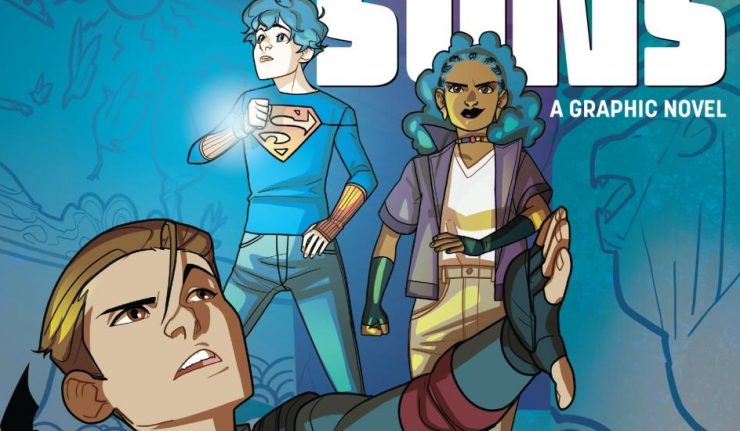 Super Sons: Return To Landis: Finishing the thrilling adventure that began in The PolarShield Project, a mysterious new foe plans to release a deadly virus, launching the sons of the world’s two greatest superheroes on their biggest mission yet!

With the news of the Four Fingers taking refuge in the land of Landis, Batkid, Superboy, and Tilly begin their journey to stop the deadly virus from being unleashed onto the world. Meanwhile, Candace has found her way to Landis and is taken underground to a group of people who still believe her to be the true queen of Landis. Our team is reunited in an action-packed adventure through the desert of Landis, an unknown territory filled with unknown dangers!

With Escape To Landis, Ridley Pearson completes his Super Sons trilogy. There seems to be something of a negative reaction among some readers for this series. However, I think this more because of what this series isn’t rather than on its own merits. Unfortunately, the title Super Sons invites comparison with Peter Tomasi’s Super Sons titles, which isn’t really a fair comparison.

To be fair, I have attempted to judge Pearson’s books as their own thing, apart from the books it shares a title with. And Pearson has made this easier by making his series very different. Some of these differences are good, others not.

The best difference is the inclusion of two young girls into their group. I like that Pearson deliberately steered away from Candace or Tilly being based on any existing DC characters. This gives him the freedom to portray the characters without any criticisms that he “ruined” a beloved character.

Pearson has added a lot of diversity to his version of the DCU. Not only in terms of gender, but the cast is rather ethnically diverse. I did notice that Ian Wayne’s skin appears to be coloured a bit darker than in The PolarShield Project. I wonder if this was in response to complaints that the character was being “whitewashed”, considering his maternal lineage.

Speaking of which, Escape To Landis confirms that his mother, as in the main DCU, is Talia Al Ghul. However, n this universe, Ian was unaware of his mother’s identity, instead of having spent his early life with her. However, it does raise some questions. If Ian didn’t know about Talia, then what did Bruce tell him about his mother? Did he make up a lie or did he just refuse to tell him anything? Either way seems like a poor parenting decision.

The story does come to a satisfying conclusion, with all four of the young heroes contributing to their eventual victory. Despite Jon and Damian being the titular characters, Candace and Tilly pull their weight as members of the team.

Which raises the question: why use the title Super Sons, when half of the team aren’t “sons”? I suspect that DC wanted to capitalize on the popularity of the concept. As I stated above, this resulted in unfair comparisons to Tomasi’s Super Sons.

Also, I feel that fans would be more accepting of the use of the title if Pearson’s first volume hadn’t arrived hot on the heels of DC messing up the dynamic of the Super Sons by contriving age jump for Jon. If they had left room for the fan-favourite title to continue, fans would have been more accepting of this alternate universe version.

I would be happy to see Pearson continue the adventures of these young heroes, but I think DC should strongly consider change the title from Super Sons that doesn’t have the same associations.

Super Sons: Escape to Landis serves as a satisfying conclusion to Pearson’s Super Sons saga. Although the series is judged somewhat harshly by some, it’s quite a good story. I would love to see Pearson continue the adventures of these characters, but perhaps under a new title next time.