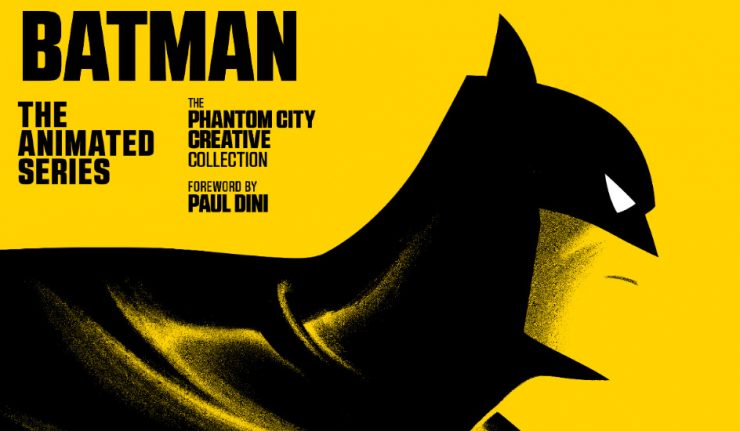 Known for their limitless passion and incredible ingenuity for film and television posters, Mondo turns their attention to the highly acclaimed DC show Batman: The Animated Series for this amazing, once-in-a-lifetime art book.

So, when I first heard about this book, I was instantly intrigued and knew I was going to want it, and thanks to the lovely people over at Insight Editions, that dream became a reality. With some stunning artwork and a fantastic introduction from the one and only Paul Dini, this book was more than I could’ve imagined.

Growing up in the 90’s, Batman: The Animated Series was a staple for me and was the catalyst for my love of The Dark Knight and DC Comics. The dark palette, the booming score, and the incredible voice cast has made this series the best comic book television series ever made, at least in my opinion.

Then there’s Mondo. This company is the premiere spot for movie posters, with some of the most out-of-this-world artwork I’ve ever seen. When I was at NYCC 2019, I stopped by the Mondo both and picked up a huge Batman: TAS poster, simply because of just how stunningly beautiful it was, and this book showcases that talent from an incredible artist, Justin Erickson.

Coming over from Phantom City Creative, Justin Erickson brings all of his amazing talent to this book, starting off with a fantastic interview of him talking about his experiences with Batman, his passion for art, his inspiration to start this series, and so much more. Then we get into one of my favorite pieces in this book from one of my favorite comic book movies, Batman: Mask of the Phantasm.

Just look at that image. The black and white with the pops of red are incredible and scream classic Batman: TAS. This was the poster that started this entire art series off, so it’s fitting to make this the first piece displayed.

The book is filled with dozens of episodes worth of posters, concept art, soundtrack designs, and more, many of which are accompanied by some insightful blurbs from the artist.

The only negative I have, which is so small, was that the way they numbered their episodes in this was based on release date as opposed to true episode numbering, as seen in the Blu-ray release. But again, it’s so small of a negative that it won’t even affect my score.

Chock-full of gorgeous pieces of art, many of which I would love to hang on my wall, Batman: The Animated Series: The Phantom City Creative Collection, is one of my favorite pieces to come out of Insight Editions, and is an absolute must have for any fan of comics or art. So pick up your copy right now, you won’t be sorry!