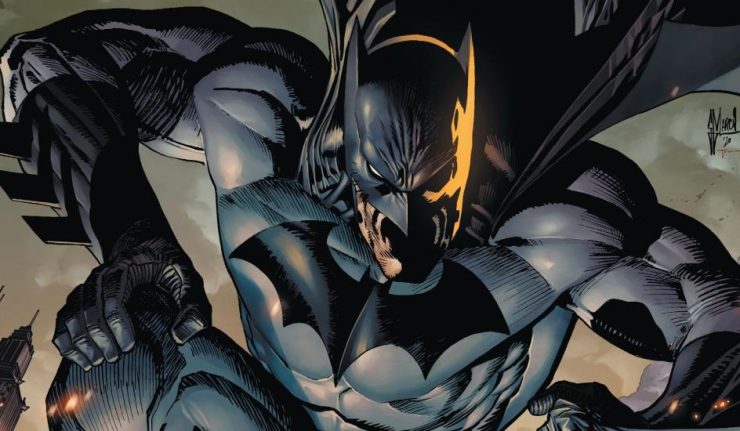 Batman #101: A new day dawns in Gotham and the horrors of “The Joker War” are just being realized. A bold new direction for Batman begins as Bruce Wayne’s circumstances are forever changed. How did the Joker’s rampage affected the citizens of the city? And why does Cole Cash-a.k.a.-Grifter, now work for Lucius Fox?!

James Tynion IV has teased that there would be some significant changes in Batman’s world coming out of the “Joker War” storyline. With Batman #101 we are starting to see what some of these changes are.

Foremost among these seems to be Bruce’s relationship to Lucius Fox and Wayne Enterprises. Lucius seems to have calmed down since his appearance in Batman: The Joker War Zone #1. However, he seems somewhat wary of Batman, perhaps slightly hostile.

Although Catwoman returned the Wayne Fortune to Lucius’ care, Bruce no longer has free reign of to the resources of his family’s company. Wayne Enterprises is under scrutiny, and the board have removed Bruce as the head of the company.

He still has his personal wealth and a generous salary from Wayne Enterprises, but this drastically cuts down the scale of equipment that Batman has access to. As Lucius explains, “Without the money, you’ll be under far less scrutiny, and you will be able to continue to operate as Batman. But it will be a leaner Batman. No more rocket ships or satellites or sophisticated A.I. drones that know how you’re going to get punched before you do”.

This change could be a good thing, allowing stories where Bruce has to rely more on his ingenuity, fighting prowess, and detective skills than on his extensive gadgetry. Batman will have to become somewhat more grounded stories that don’t hinge on Batman using superior technology to defeat enemies.

Also, Bruce decides to move from Wayne Manor into Gotham City, like he did during the 70s. But instead of moving to the penthouse of the Wayne Foundation, he’s moving to a brownstone. This will be quite a change from the manor for Bruce, but as he tells us, “It’s time I started building a life with an Alfred”. Bruce has decided it’s time to move on with his life and figure out how to be a better Batman.

Also, Bruce and Selina have a talk about where their relationship stands in the aftermath of the “Joker War”. Bruce feels he needs time to sort his own life and Selina has her own issues to sort out. Selina suggests a pact: “I’ll give you one year to go figure all of this out. That’s how long it will take me to sort out all of my new enemies, and clear my name enough that we can do this properly. And then we can make some real decisions about how to do this right. How we can actually be together”.

But while they put off deciding their future, this doesn’t mean that they are splitting up completely. Selina suggests a rendezvous at Bruce’s new home, indicating that they can still get together at times over that year. But for the most part, their relationship is going on the back burner for the next year. Luckily, for fans of this romance, Tom King’s Batman/Catwoman series will be launching shortly and will last exactly one year. That seems rather convenient. Is DC planning something big for the pair next year? Perhaps we’ll finally get the wedding that was supposed to happen in Batman #50.

I liked the fact that Batman doesn’t actually face a villain in this issue. After all that went on during the “Joker War” storyline, I’m pleased we get a bit of a respite before heading into the next storyline. And Tynion makes good use of this break to set up the next phase in Batman’s life.

The changes to Batman’s world that Tynion is introducing definitely have a lot of story potential. However, they could also prove a drawback if not handled correctly. However, Tynion and Peter J. Tomasi (the writer of Detective Comics) are both talented writers, so I have little fear that they will have any trouble adapting to these changes.

And once again Guillem March’s artwork is impeccable. he does a brilliant job and I just love his rendition of the title’s characters, especially the Dark Knight himself. I especially enjoyed seeing his splash page with Batman in his classic blue and grey costume, as well as Tim in his original Robin suit.

Batman #101 serves as a great set-up for the new era in Batman comics. And it also makes a good jumping-on point for new readers. After reading this issue, I am confident that we are in or a treat in the months ahead.