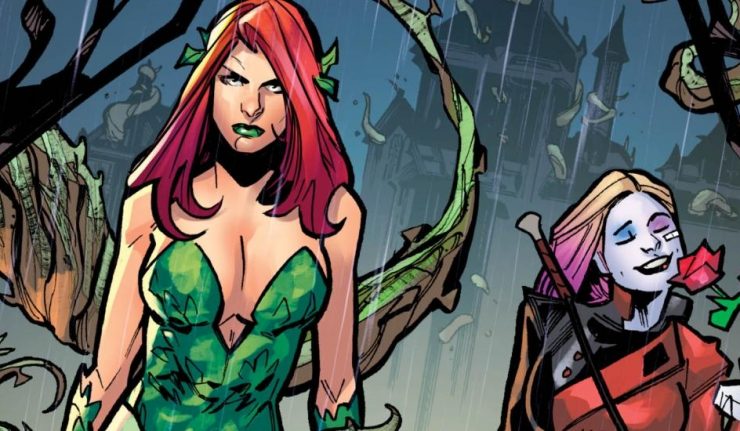 Injustice: Year Zero #8: Finally, it’s the Poison Ivy and Harley Quinn reunion we’ve been waiting for! Pack your bags and steal a plane-we’re going to Vegas!

When Tom Taylor started hinting on Twitter that something big was coming in Injustice: Year Zero #8, I wondered what major beloved DC character was going to be killed off this time. Given that tragedy and carnage are par for the course in Taylor’s Injustice and DCeased stories, I didn’t really expect a happy surprise. I certainly didn’t expect a happy surprise in the issue.

And when Poison Ivy confronted the Joker in defence of Harley, I thought, “Here it is. The Joker’s going to kill Ivy”. But to my surprise, Ivy managed to survive – mainly due to the Joker’s mystic amulet being out of his reach during the encounter. Instead, Ivy surprises Harley with a proposal and a quickie wedding in Las Vegas.

While DC has a number of LGBTQ characters, same sex marriage is still quite rare in the DCU. I haven’t read far enough into the other Injustice series to know if this relationship is headed for tragedy, but for the moment, we get to witness this joyous occasion. And given the foreboding hints we have about the looming fate of the Justice Society, we should treasure this moment while it lasts.

The only real negative I can see in this chapter, is that that DC hasn’t taken this step with these or other LGBTQ characters in the DCU proper. I would love to see DC take the bold step of having a high-profile same sex wedding in the mainstream DCU. This is a step that is long overdue. And it would smooth over some of the bad feelings from when they nixed Batwoman’s marriage to Maggie Sawyer.

Injustice: Year Zero #8 is a sweet surprise in Tom Taylor’s otherwise dark Injustice prequel. I’m sure next issue will return to the usual carnage, but let’s just take a moment to enjoy this milestone chapter before carrying on.