Thirty years after Batman: The Killing Joke changed comics forever, Three Jokers reexamines the myth of who, or what, The Joker is and what is at the heart of his eternal battle with Batman.
New York Times bestselling writer Geoff Johns and Jason Fabok, the writer/artist team that waged the “Darkseid War” in the pages of Justice League, have reunited to tell the ultimate story of Batman and The Joker!
The final chapter of the most terrifying and personal Batman mystery is here! Still reeling from their last encounter with the three Jokers, Batman, Batgirl, and Red Hood discover the terrible truth about the Three Jokers’ plot.
Will the caped crusaders have the strength needed to put an end to the maniacal menaces’ master plan once and for all, or will it be lights out for good?
You won’t want to miss the stunning conclusion of Batman: Three Jokers as it completes its trajectory as the ultimate examination of The Joker and his never-ending conflict with Batman. 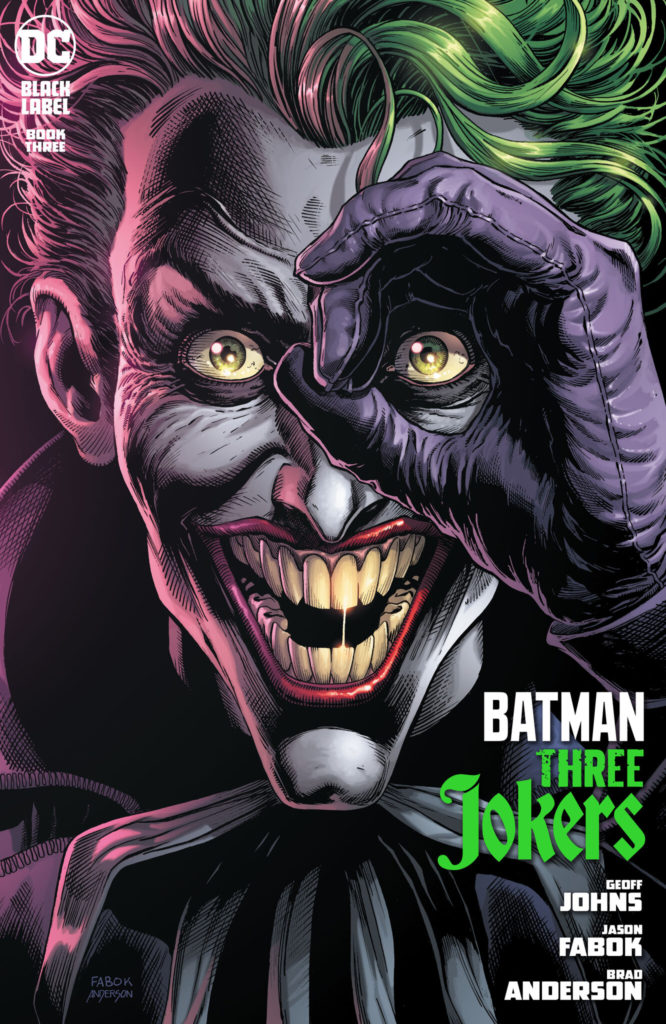 Geoff Johns is a genius.  Can I simply start with that? Take one tablespoon of Death in the Family, mix in one cup of The Killing Joke, add the art and colors by Jason Fabok and Brad Anderson respectively. What you end up with isn’t a cake… it’s one of the best Batman/Joker buffets you can put on the table.

The Criminal… The Clown… The Comedian… we though the list was complete.  But page 4 provides the reader a list greater than what we could ever have thought of. Would we have bought “Twenty-eight Jokers”?  Maybe, but the layers that Geoff Johns provides us allow us to be detectives.

Speaking of detectives; Batman, Red Hood and Batgirl… put aside their emotions, differences, and work through a case. Those are some of the cool scenes that Johns gives us. 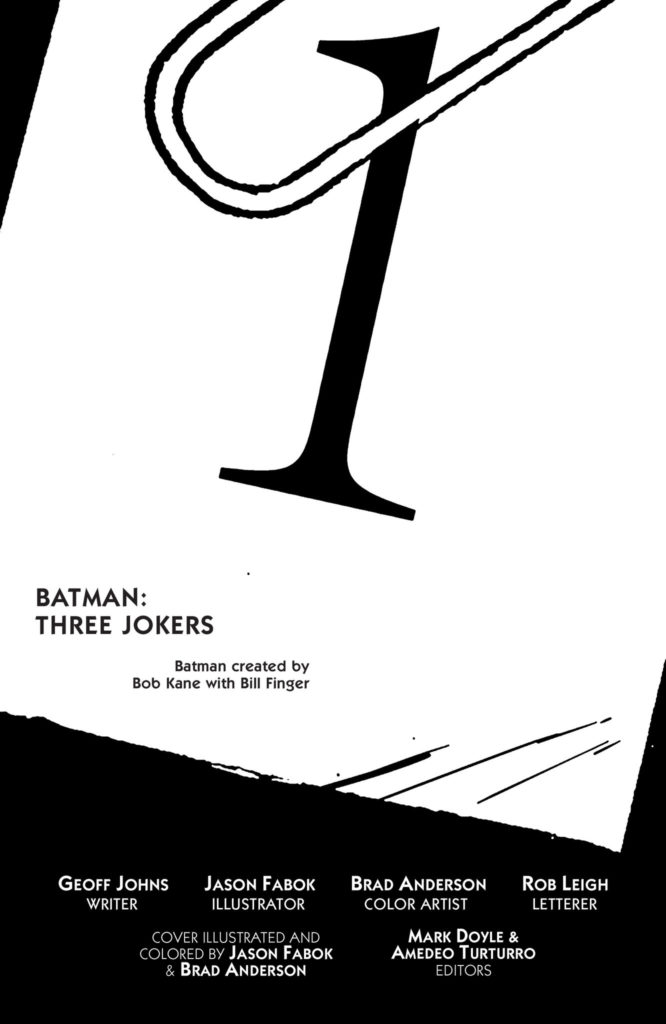 Johns hid clues in issues 1 and 2, and I missed them, I totally missed them. I don’t want to spoil this book for anyone, but you need to read issues 1, 2 and 3.  Then go back, read Death in the Family and The Killing Joke. As Joker tells Barb… “Smile!” You will have connected dots that Johns has created from the prior clssics, by Jim Starlin and Alan Moore. He actually goes all the way back to Crime Alley, where the entire Bat Saga began.

I will indicate that Johns has written a love letter of sorts that clearly defines the motivations in the relationship in terms of both Batman, and the Joker.

Johns uses Joe Chill, the street robber that made the bad choice of killing Martha and Thomas Wayne, to be used as a pawn in the Joker(s)’s plans of creating the ultimate Joker… one that cannot be ignored at all, and will become the centerpiece and all that matters to Batman.

Or so we think.

Joe Chill’s presence either presents closure for Bruce, or opens an entire new can of worms. You have to read this to draw your own conclusions. (Way to go Geoff!) 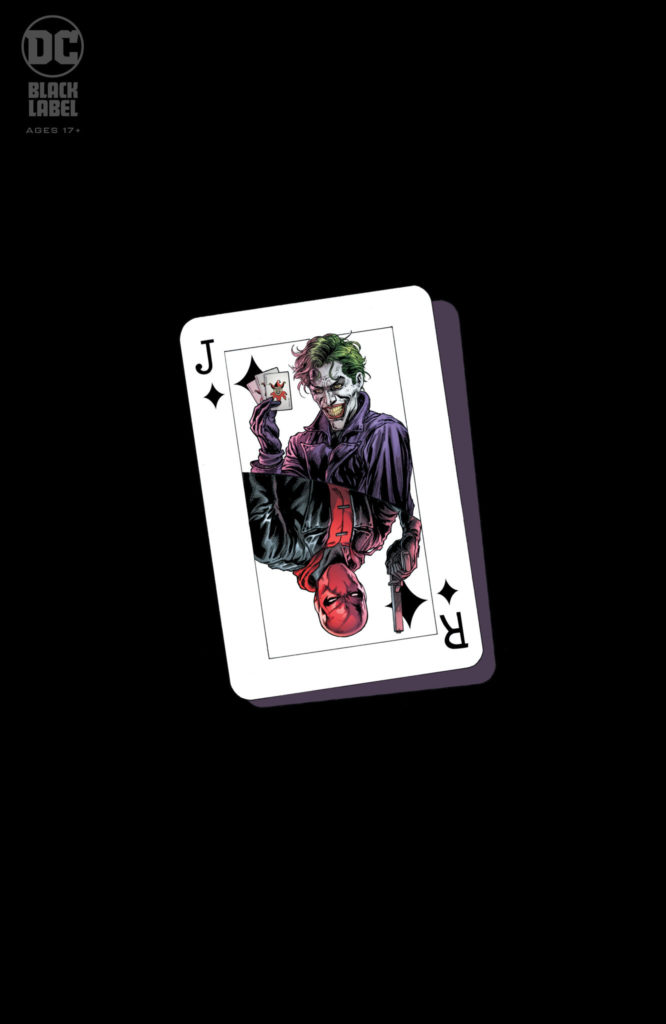 Johns takes the crowbar moments that “killed” Jason, and the “gun shot” memories that paralyzed Barbara, and creates intense scenes of fear, revenge, and utter psychological paralysis for all of us, as readers.

How much can Barbara and Jason take? To what ends will Bruce go to protect both of them, and possibly the Joker as well? What… Protect the Joker?

Johns contributes to the cycle of confrontation in that the Joker wants this battle to go on and on as there is a fear of boredom if this ends. Who is really broken…Batman or the Joker?  And why has Batman let this continue?  The Joker isn’t the only one who has a motivation in this antagonistic relationship.

Johns’ eyes must be tearing with all the onion layers he gives us in this book.

Almost every page has six to seven frames telling the story in a cinematic fashion. This makes the story much richer, as well as taking the pace up a notch. You feel like you’re in a movie when reading this book! The colors and art in this series! Fabok and Anderson provide us Halloween Eye Candy like no one else!

The ending. Johns left it on the table for us… the clues were there and we missed them. However, Batman didn’t. As Bruce states to Alfred “Not to sound like people think I do, but I’m Batman. I knew….” (I’m not spoiling it for you.  Again, read all three issues, Death in the Family, and The Killing Joke… and smile!).

Was Three Jokers #3 worth the wait? Yes! Should you buy all three? Yes? Do we want Geoff Johns to work this angle with Bane? YES!!!!