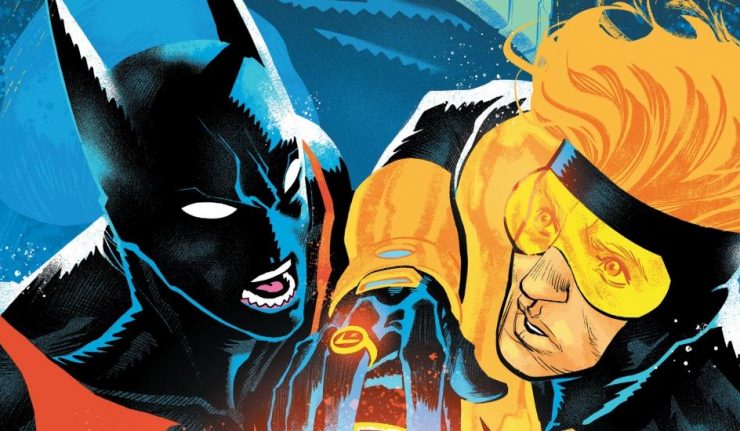 Batman Beyond #48: “First Contact” begins! Something is very, very wrong with Bruce Wayne, as he lashes out in anger and tries to kill Batman Beyond! Who else can save him but…Booster Gold?! The greatest hero history never knew is going to take Batman Beyond back in time to the Gotham of old, where Bruce Wayne is Batman-which means Batman and Batman Beyond will meet at last!

Batman Beyond #48 brings Terry face-to-face with Bruce as Batman in his prime. While this would be the ultimate team-up, their meeting doesn’t get off on the right foot.

The story starts with Bruce suddenly turning hostile to Terry and Matt. He starts ranting about Terry being an assassin sent to kill him and attacks the brothers. This is quite a shock, and seemingly out of character for Bruce, but I like how it shows that even at his advanced age, Bruce can still be a formidable threat.

Booster Gold appears to save Terry from Bruce’s onslaught, but as we soon discover, Matt isn’t so lucky and has apparently been killed by Bruce off-panel. I don’t know which is more of a shock: Matt’s death or the fact that Bruce Wayne murdered a child.

Booster’s presence serves two purposes in this story. The first is to deliver exposition explaining what’s going on. Apparently in the past, some villain had placed a mental “time bomb” in Batman’s psyche which caused Bruce’s sudden violent turn. Booster informs Terry that it’s too late to save Matt in the Terry’s present, but that they can save Matt and Bruce by going into the past to prevent the time bomb from being set in the first place.

I was somewhat amused to see that Terry instantly distrusts Booster and takes an initial dislike to him. Booster can come off as rather annoying at times. Plus, he does a poor job of explaining himself during their initial encounter, which is typical of Booster. Terry’s reaction is entirely understandable.

In the past, they encounter the villain Blanque, a telepathic supervillain, which makes him the logical suspect for placing the mental time bomb in Bruce’s mind. During the encounter, Blanque discovers from Terry’s mind that he’s Bruce’s future successor.

But if Blanque didn’t know about Terry being Batman in the future, then how did he know to set Bruce up to turn against Terry in that future? This seems to be a paradox. But it’s not the only one. Terry also saves a child from a fire. This child turns out to be Warren McGinnis, who will become Terry’s father. If Warren had died in the fire, Terry would never have been born.

I wonder if this implies that Terry was destined to travel back in time to save his father and give Blanque the knowledge and motivation to set his telepathic compulsion in Bruce’s psyche. But this implies a causality loop.

To further complicate things, despite Booster’s warning to not let Bruce see Terry, the issue ends with a direct encounter between the two Batmen. Clearly this story cannot end with Bruce remembering this encounter. I suspect that Booster and Terry will need to force Blanque to remove Bruce’s memories of the encounter. But wouldn’t that give the villain the perfect opportunity to set his time bomb in Bruce’s mind?

I also have to state my appreciation for the art of Paul Pelleteir and Norm Rapmund. Their drawings are very clean and dynamic. One could hardly ask for a better team to draw a meeting of two Batmen.

Stories with Booster Gold can sometimes endear him to the reader, and other times the Booster can just be annoying. Unfortunately, this story tends toward the latter situation. Hopefully in the next chapter, Booster can make up for it, and show some more of the character’s innate charm.

Batman Beyond #48 made me realize how much I’m going to miss this title. With the series nearing the end, Dan Jurgens has thrown the series into high gear and presented us with the dream pairing of the present-day Batman and the Batman of the future. When it comes to fan service, Jurgens know just what will thrill his audience the most.