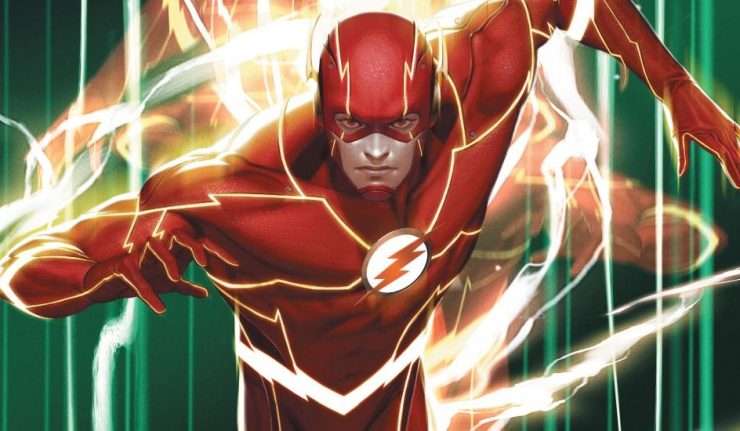 The Flash #764: Sitting idle in Iron Heights Prison for years, Dr. Alchemy found the time and knowledge he needed to finally beat the Flash once and for all. In a battle of wits and scientific knowledge as much as speed or power, Barry Allen must confront one of the Flash’s most dangerous foes before the good doctor becomes a god.

I had thought Kevin Shinick’s first story last issue was a quick one-and-done before he got into his first story arc. However, I noticed that the story in The Flash #764 is titled as Part 2 of “With This Ring”. This implies that there is some connecting thread running through the seemingly distinct stories.

A recurring theme is evident that might indicate what this thread is. First, the story arc’s title, “With This Ring”. Iris also comments that it “must be nice having a ring that you never want to leave your finger”. This brings to mind the idea of marriage. Iris even presents Barry with a small box. It contains earbuds, but Iris warns Barry to not freak out by the box, acknowledging her awareness that it appears like a ring box.

Perhaps Shinick is hinting that wedding bells might be in their near future. The marriage of Barry and Iris was an important part of DCU history pre-Flashpoint, and it’s something I would love to see re-established in the current continuity.

In The Flash #48, Barry faces the villain Dr. Alchemy. Alchemy provides a unique challenge. Not only is his ability to transmute elements extremely powerful in itself, but his scientific expertise makes him even more dangerous. Alchemy challenges both Barry’s powers and his scientific knowledge.

I was also intrigued to see Dr. Alchemy robbing a museum exhibit based on the Metal Men. This does fit with the elemental theme nicely. Perhaps we might see Will Magnus’ robots make an appearance to help Barry deal with Alchemy.

I also like Will Conrad’s art this issue. I like seeing the different ways that artists capture the Flash’s kinetic energy, and was quite pleased with how well Conrad did so. I also love his depiction of Barry’s iconic costume. Conrad’s style seems well-suited to a title like The Flash.

While it’s tempting to compare Shinick’s writing on The Flash to his predecessor Joshua Williamson, it would be rather unfair, as Williamson told an epic story spanning over a hundred issues, while Shinick has barely started his run. Instead, I have decided to approach it as if it were a new series, set apart from Williamson’s. And so far, Shinick hasn’t disappointed. The story is intriguing, and Shinick hasn’t made any missteps so far.

I quite liked The Flash #764. Shinick is proving a capable writer for the title and perhaps might prove to be as good as any of his predecessor’s, especially if he takes Barry and Iris’ romance in the direction he seems to be hinting at. If Shinick can maintain the quality of writing he has shown in his first two issues, then we should be in for another good run.