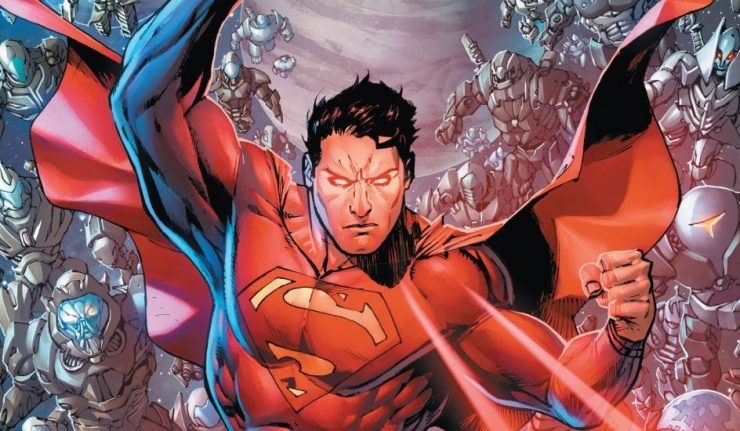 Superman #26: As Superman deals with the continuing fallout from the world knowing his truth as Clark Kent, he finds himself faced with a physical threat beyond anything he has ever faced before. Synmar traveled across the universe to destroy the Man of Steel. How can Superman contain the havoc this new foe will cause so that everything he has sworn to protect doesn’t collapse with him?

For me, the highlight of Superman #26 isn’t the fight against the Synmar Utopica that is the focus of the story. Rather, it’s the flashback to the day before, where Superman enjoys a few moments of downtime with Lois. I find it very relatable to see Superman just taking a few moments out of his busy day to lie back, relax, and spend some time with Lois.

I also liked seeing him using that time to discuss some of the stresses that he was discussing with Doctor Fate a few issues ago. He really should have gone to Lois about his feelings before taking them to Fate, a relative stranger when Clark unloaded on him. Also, it’s good to see that their marriage is in good shape, considering that Bendis started his run with them separating.

As far as the villain battle at the centre of the issue, the thing that makes it stand out is how the Synmar Utopica remains silent. With most villains, they wear their motivations on their sleeve. Clark always knows whether the foe he is facing is motivated by greed, seeking revenge for a grievance, or is just plain evil. With the Synmar, Clark doesn’t know what’s going on. He doesn’t even know this being’s name.

And this negates Clark’s first reaction completely. Superman always tries to talk things out, trying to defuse a situation before it comes to blows if he can. If not, he continues to try to negotiate during the fight, and Superman often wins a fight by coming to terms with his foe rather than subduing them.

But this is not possible with a foe who refuses to engage verbally. And while Superman defeating the Synmar Utopica is inevitable, I am left wondering if Clark will ever get any answers on why the fight happened in the first place.

The issue ends with Clark having an encounter with his co-workers in the Daily Planet, particularly with Steve Lombard. Steve confronts Clark with his rather reasonable fear that the public reveal of his secret identity has made the Daily Planet a target for Superman’s enemies. Clark explains that the Justice League has installed defence technology that makes the Planet (and some other buildings) as secure as the Hall of Justice.

There is also a brief exchange that explains a lot about Steve and Clark’s relationship over the years. Clark reveals that he sees Steve as a friend, which surprises Steve. He responds with, “I thought we were competitors”. Steve has usually been portrayed as a bully, with Clark as his favourite victim, while Clark has just wanted the people he works with to like him – including Lombard. I am hoping that this will cause Steve to reflect on how he’s been acting and gain some maturity – perhaps finally becoming worthy of Clark’s friendship.

Speaking of Steve Lombard, why does he seem to never look the same from one appearance to the next. I suspect this is because his appearances are so sporadic that each artist who draws him doesn’t know and doesn’t know where to look for a reference, so they recreate his appearance. DC should really look into putting together some visual reference material for artists, so that characters like Steve can maintain a standardized look.

Bendis’ run on the title has been hit or miss, but I would definitely group Superman #26 among the hits. In this issue we get to see a some good character interaction between Lois and Clark, as well as between Clark and Steve. Plus, Bendis has added an interesting twist by pitting Superman against a villain who remains mute, leaving Clark to guess at his motivations. All in all, Superman #26 is one of Bendis’ better issues of Superman.