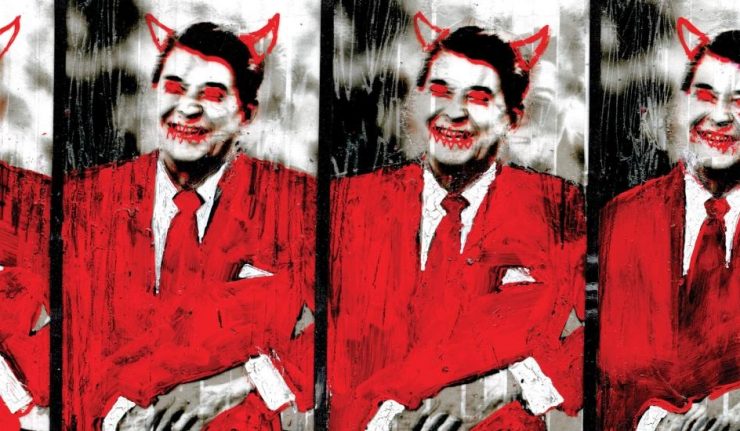 The Department of Truth #2 delves deeper into the ramifications of a world where truth is not an absolute, but can be shaped by belief. Tynion delights in thinking up new and strange effects this would have on the world around us.

Sometimes, it can be funny, as in the case with Doctor Tin-foil, whose name comes from his odd choice in headwear. It’s a concept that seems laughable at first. But when you consider that many believe tin-foil hats protect your mind from telepathic attacks, it makes perfect sense where belief shapes reality.

Also amusing, but also somewhat sad is the revelation that the belief of kids’ makes Santa Claus real, resulting in the Department having to kill him. But Dr. Tin-Foil reassures Cole, “Thankfully, that’s only had to happen once or twice”.

But, it gets even darker. In the real world, the phenomenon of recovered memories of childhood abuse has been debunked. Memory is pliable, and people can be made to “remember” things that never happened. But if belief can bend reality, it follows that those memories can be true, even if they didn’t “really” happen.

And this is particularly relevant to Cole Turner’s backstory. In Department of Truth, we find that he was in a daycare centre that was supposedly operated by a satanic cult. Like in real life instances, he was led to recount memories of his experiences. We see his memories of a man with a star painted on his face eating a baby and threatening him that if the devil would come for him if he told anyone.

Cole has grown up thinking these memories were false, despite the fact that they seem real. However, now that he has discovered how the world really works, he comes to the realization that they may well be true.

Especially true is the part about Satan coming for him. He did tell, and considering how many people in the world believe in Satan’s existence, then he almost certainly exists – or she. In one child’s statement, she describes Satan as a woman with no eyes. Just like the woman with the X’s over her eyes that Cole encountered last issue!

Once again, I have to compliment Martin Simmonds’ art. HIs semi-abstract style is exactly the write choice to depict a world where truth is malleable. A more realist approach that clearly defines every detail would be inappropriate when reality itself can’t be clearly defined. Simmonds’ artistic choices are pitch perfect.

Not a single one. The concept, writing, and art are all absolutely perfect.

With The Department of Truth #2, James Tynion IV and Martin Simmonds have proven that their fantastic debut issue was no fluke. This is already shaping up to be one of the best series I have ever read, and we’re only two issues in. This comic is surely destined to be one of the all-time greats. How can I know that? I believe it’s true, so by the book’s own logic, that makes it true!