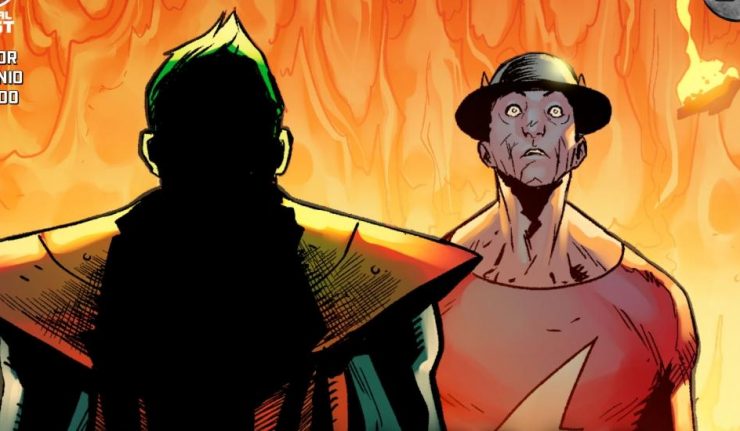 Injustice: Year Zero #9: After what happened to Joker, he blows off some steam by taking it out on the JSA…starting with the Flashes and Wildcat.

After last issue’s interlude, Tom Taylor returns to the his main story in Injustice: Year Zero #9. The story starts off with a bizarre scene. With Harley gone, the Joker forces his henchman Gary to serve as a replacement by donning her costume – with hilarious results. As Joker declares, “You look utterly ridiculous. I love it!”.

Taylor then shows the Golden Age Flash Jay Garrick interacting with his wife Joan and his successor, Barry Allen. These encounters are rather heartwarming. However, Tom Taylor is a master of making readers happy, just before pulling the floor out from under them. As it turns out, Jay is the Joker’s next target.

Even worse than killing Jay, the Joker possesses him, to use as a weapon against his teammates – just like he had done with Alan Scott. The Joker then sends Jay off to confront Wildcat.

What I like most about this story is how Taylor keeps the readers guessing. Despite this being a prequel, Taylor keeps taking the story down surprising paths. It makes the series that much more exciting when you can never predict what Taylor will throw at us next.

If this series was set in the canon DCU, then I would be livid with Taylor for the crap he’s inflicted on these beloved characters. But we knew going into this story, that it wasn’t likely to have a happy ending. In fact, Last issue’s wedding demonstrates that there is more to this series than violence and tragedy.

With Injustice: Year Zero #9, Tom Taylor brings us another chapter of a story that thrills, surprises, angers, and delights the reader. I look forward to seeing what else he has coming up in the issues ahead.