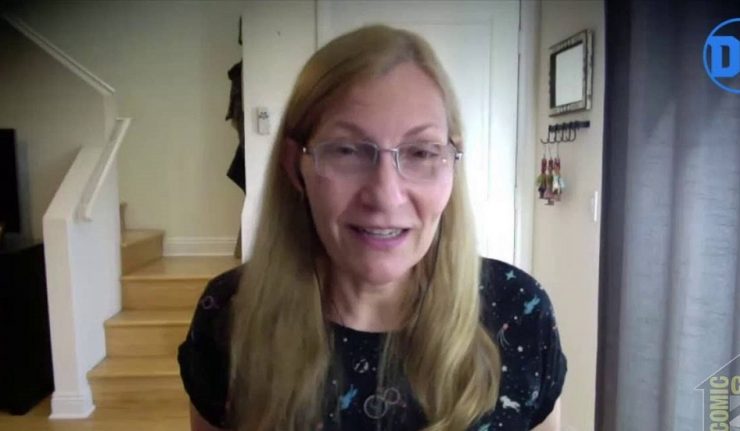 Marie Javins is in charge, but don’t caller her Chief.

Or maybe you should.

Marie Javins – Who is She and Why Should Fans Be Excited?

Cherry stated, “Marie intrinsically understands the power of comics and their unique ability to entertain and [empower. In] addition to her many creative talents, she’s also incredibly committed to increasing access to to this amazing industry by mentoring the next generation of comic book creators and helping them find their voices. I look forward to working with her in her new role.”

Prior to co-Editor-in-Chief, Javins’ background with the company began with a temporary position in 2014. She soon joined the regular staff as DC’s executive editor of global and digital publishing. She was in charge of titles such as DC’s Super Hero Girls, Superman Smashes The Klan, Harley Quinn: Breaking Glass, Dark Knights: Dark Metal, and and Justice League. Of her new role, which will see her working alongside Chief Creative Officer Jim Lee, Marie reflects on it being the culmination of a journey that began as a reader.

“As a young girl, ” Javins says, “devouring comics of Wonder Woman, Nubia, and Supergirl, I never dreamed [decades later] I’d be at the helm [of DC Comics.] I’m incredibly honored by this responsibility, and will dedicate myself to supporting DC’s extended family of staff, talent, retailers, and partners around the world in our quest to tell innovative visual stories that both reflect and expand our world [and] in some cases, our galaxy and multiverse.”

As for Jim Lee himself, he is elated to work with Marie moving forward with the DC Universe. ” Anyone who has been fortunate enough to work with Marie in the comics business knows two things about [her] one, that she has the impeccable creative instincts and the talent relationships needed to create the kind of stories our fans crave and demand and two, that her deep knowledge of the global business of comics and its endless variations of storytelling means big things are on the horizon for DC in the years to come.”