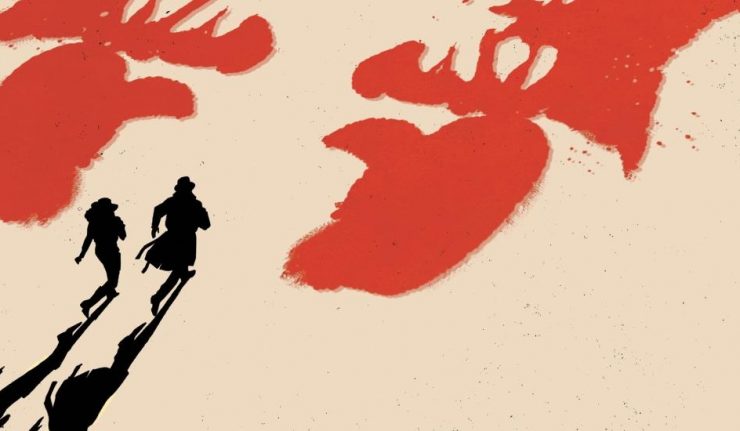 Rorschach #2: What’s the connection between an aging comic book artist and Rorschach? That’s the question the detective investigating the attempted assassination of a presidential candidate must answer. Wil Myerson, a reclusive artist known for his pirate comics, went from drawing the adventures of Pontius Pirate and the Citizen to working with a mysterious young woman hellbent on making sense of a post-Watchmen world. Somewhere in the life of Wil Myerson lies the key to learning more about Rorschach.

In Rorschach #2, Tom King’s unnamed detective continues his investigation into an attempted assassination by someone wearing a Rorschach costume. Last issue, this Rorschach’s body was identified as comic-book artist Wil Myerson. The investigation now leads to the apartment building Myerson lived in.

One striking thing about King’s series is that while it is clearly set in the Watchmen universe, Apart from the mystery being centred around an apparent Rorschach, the Watchmen references are fairly subtle. Doctor Manhattan is mentioned in a snippet of conversation. Myerson wrote pirate-themed comics, which were more popular than superhero books in the world of the Watchmen.

And then there’s the name of the apartment building Rorschach is set in: Lewis Tower. I am guessing that this is a reference to Byron Lewis, a.k.a. Mothman. It is quite possible that the wealthy Lewis at one time owned the building and bestowed his name on it.

I quite enjoyed the section of the book that features unfinished pages of a comic by Myerson. King’s story becomes very meta, introducing a number of layers. Wil Myerson’s character, “The Citizen” appears to be based on Rorschach, who a real person in Myerson’s world. However, the character of Rorschach was based on the Question. Add to this that Myerson seems to be partially based on Steve Ditko, the real life creator of the Question.

I really love Jorge Fornes’ artwork, especially in this issue. I love the devices used to highlight the present story from the past narrative the detective is piecing together. One striking example shows the building’s lobby, spanning the width of the page. But Fornes breaks the picture up into four panels, with each panel showing alternating time frames.

I also love how Fornes’ style switches to echo Ditko’s when we are reading the unfinished pages of The Citizen. He does a beautiful job of recapturing the feel of a comic book from that bygone era. Also, I love how the Fornes captures the look and feel of the late 70s/80s, despite being set in the present day. The world of the Watchmen still retains a lot of elements of that era due to their alternate history, and Fornes’ art reflects that perfectly.

Readers of the original Watchmen might be disappointed if they were expecting a sequel to that classic story. Especially if they were expecting an adventure starring the original Rorschach. While the story is set in the Watchmen universe, there is little apparent connection to that story. And it is unclear whether Walter Kovacs has any connection to the events of this series.

King’s story is a mystery, and it is unclear as to where this mystery is headed, but after reading his Mister Miracle and Batman stories, I trust that whatever lies ahead will be well worth the read.