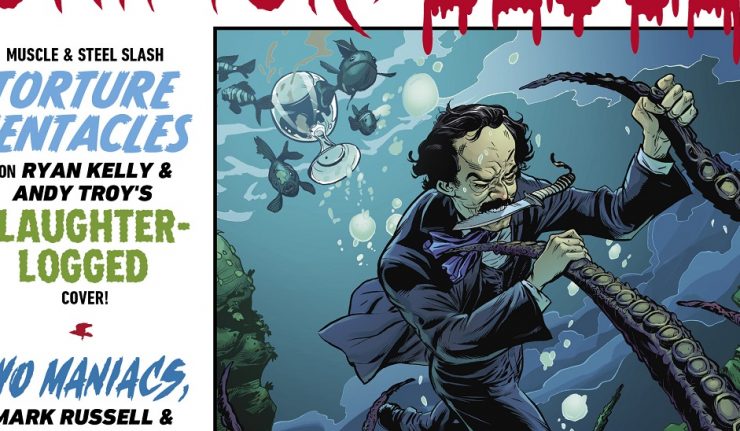 Edgar Allan Poe’s Snifter of Blood #2 contains two comic stories and two text features, the Cereal serial continues and Poe gets some pre-feedback on his classic “The Cask of Amontillado.”

It’s not often that comic book companies really try something different.  However, Ahoy Comics with Edgar Allan Poe’s Snifter of Blood #2 not only attempts it but succeed famously.  There is not a single aspect of this comic that is not a positive.  This comic has wit, humor, depth, insight and a bit of science fiction and some terror.

The lead story, “The Monster Serials: To Hell Comes a Guest,” is humorous and emotionally moving at the same time.  It’s punctuated by Mark Russell’s masterful satire (in a sense) of classic kids’ cereals, that’s right- breakfast cereals!  You’re not sure at first, but yes, it does say “Choclavania” on page one.  So imagine if Count Chocula were a real vampire…let that sink in….  It’s simply brilliant as Russell reimagines all the aspects of kids’ sugary cereals.  Would you believe that “Post” (the manufacturing competitor of said cereals) is actually the villain?

Peter Snedjbjerg is equally brilliant in his portrayal of the motley cast of cereal inspired characters.  He draws it straight and it’s just perfect.  His art sells it, despite how silly some of it may seem.  Of course the only aspect that’s really silly is that it’s inspired by characters from cereal.  The story itself is reminiscent of Bill Willingham’s take on classic fairy tales in his masterpiece, Fables.

What really elevates this story is the human aspect that Russell imbues in his characters.  There’s genuine emotions in Chocula and his wife as they both make difficult decisions.  And one can’t forget the Leprechaun King, either.  His motivations are relatable as well.  While there’s not a direct political commentary here, one can see how it could be possible with these characters.  Russell has already proven himself on the subject with Prez.

The second story, “A Tipple of Amontillado” by Devin Grayson is just as smart.  Both stories require the reader to have some previous knowledge, though Poe’s story “The Cask of Amontillado” is certainly more highbrow than breakfast cereals!  Nevertheless, Grayson imbues her tale with perhaps even more humor.  “A Tipple” is an imaginary dinner party in which other literary contemporaries poke fun at Poe and his style of storytelling as he attempts to surprise them with his newest story, “The Cask of Amontillado.”  The gags of course require the reader to know the story, but as it’s a perennial favorite of Middle and High School teachers, nearly everyone should know the basics.

The art is exciting in glorious black and white as it echoes the ’70’s magazines Eerie and Creepy correctly lauded by editor Tom Peyer on his Editor’s Notes page in the comic.  He’s not wrong!  The “serious” art by Chris Giarrusso and Richard Williams contrasts the humor in the story while at the same time delivering the comedic elements perfectly.

Peyer also encourages the reader to check out the text pieces in this issue that are one of the elements that set Ahoy Comics apart from other publishers.  Again, Peyer is not wrong.  These two stories are not only clever and engaging in their own right, but they add an amazing value to your reading experience.  This format challenges the average comic format of today in an exciting way.   Bryce Ingman’s “The Faulty Scythe” certainly owes a debt to Piers Anthony’s On A Pale Horse, but it maintains an originality and prescience.

Ahoy Comics correctly assumes that the reader is looking for value for their entertainment dollar, and with this format, the reader receives not only quality, but quantity.  This isn’t a dollar-a-minute comic.  This is as satisfying as any reading experience.

The only negatives have been successfully walled up by Montressor.

Edgar Allan Poe’s Snifter of Blood #2 is everything entertainment should be.  It’s a true escape through words and pictures.  By providing something different, Ahoy succeeds, reminding us that comics are not 32 page 5-minute reads of long underwear characters.  They are channeling a format seemingly past, but this issue proves that not only is it still viable, it makes a serious challenge to what people think of as “comics.”  Think I’ll have another taste from that snifter…