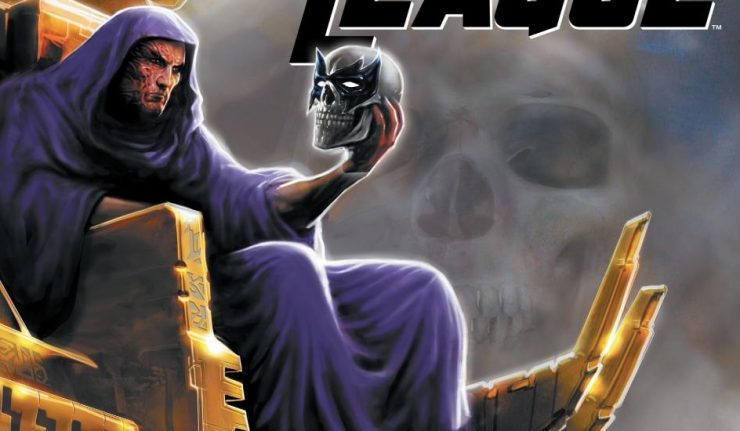 Justice League #57: “Doom Metal” part five of five! The Legion of Doom has been freed-and now they’re turning on their saviors-the Justice League! Teeth will gnash, knuckles will be bared, and Lex Luthor will make a decision that shocks everyone, including Batman, Superman, and Wonder Woman. The ending of this epic story leads directly into Dark Nights: Death Metal #5!

Joshua Williamson’s “Doom Metal” story has been centred around the League’s quest to save the Legion of Doom from Perpetua. But as Nightwing asks, “What do we do with the Legion of Doom once we free them?”. In Justice League #57, Nightwing’s team has to answer this question and fast. The villains are angry and not the least bit grateful to their rescuers. And they get even more enraged when they discover that their betrayer, Lex Luthor, is among them.

However, Lex reveals his true agenda. He seeks to win his old team back over and resume his own power-seeking campaign. Martian Manhunter gives Lex a heartfelt plea to reject the ideal of Doom and help the Justice League fight Perpetua. Unfortunately, Lex denies J’onn’s appeal and departs with the Legion of Doom. However, the issue ends with Lex returning – hopefully to help the League save the Multiverse.

As exciting as the main story is, I also quite enjoyed the secondary story, which shows Dick Grayson learning an important fact of life. Once again, we see a flashback where an awestruck Robin first encountered the Justice League. To his young eyes, they appeared invincible, equal to any threat.

But in watching them deal with the Death Metal crisis, Dick came to a realization. He narrates, “…I could see what the rest couldn’t. Past the speeches and bravado and the smiles, they were just as freaked out as I was. I wasn’t ready to confront that, so I left”. Dick has come to the realization that his idols are merely human, just like the everyone else.

Part of growing up is realizing and accepting the fact that adults are fallible, and are still figuring things out. They can be wrong, unfair, uncertain, or even scared. But they also can also be wise, just, and brave. And they can be still be paragons, despite their human fallibilities.

And by the end of the story, Dick reaches this acceptance. He muses, “But over the years I saw their struggles. And this new world showed me their greatest failure. At first it scared me. But now it’s reminded me of what the Justice League really is. They’re a group of people that, no matter what the challenge, inspire each other to do better… to be heroes”. And with this, Dick matures a little, also inspired by the League to do better.

I couldn’t find any fault in Justice League #57 or in the “Doom Metal” story arc itself. However, now that it’s over, I wonder what the future of the title is. Next issue Andy Lanning and Ron Marz take over the writing duties, but just for one issue as a tie-in to their Endless Winter event. After that, the title takes a two month hiatus during the Future State event.

This title really needs a talented writer in charge, who can commit to more than just a brief run. While DC has a wide selection of writers capable of the job, I would love to see Williamson sign on for an extended run. The good news is that he is writing the lead story for the Future State: Justice League mini. I’m hoping that’s a sign that he’s going to stick around as the regular writer once the regular title resumes in March.

Although “Doom Metal” is a side story to Death Metal, Williamson has made it an indispensable part of the overall story. Technically, you could skip it and still understand the story. However, the story isn’t truly complete without this chapter. Also, Justice League #57 clearly demonstrates why Joshua Williamson should be signed on as the title’s regular writer. Come on, DC. Make it happen!