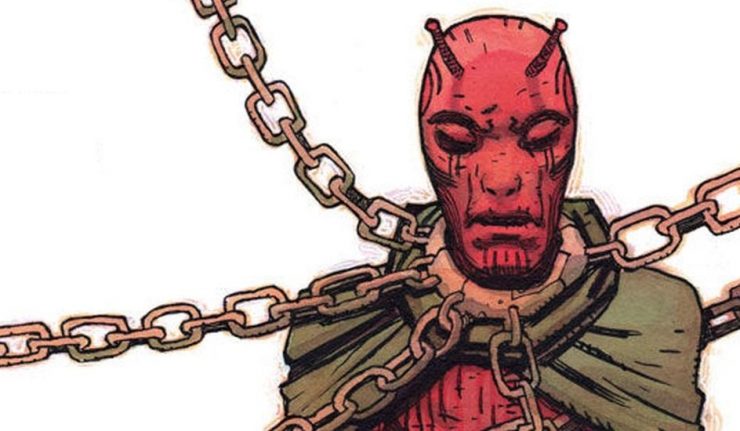 Mark Markz has found his place on Earth as both a decorated police officer and as the beloved superhero, Barbalien. But in the midst of the AIDS crisis, hatred from all sides makes balancing these identities seem impossible–especially when a Martian enemy from the past hunts him down to take him back, dead or alive.

In Barbalien: Red Planet #1, we get a closer look at one of the heroes featured in Jeff Lemire’s astounding Black Hammer series: Mark Markz, a.k.a. Barbalien. While he was one of the lead character of that title’s ensemble, it’s still great to see him get a series that focuses solely on him. Also, it’s great to see his backstory being fleshed out, giving us a better understanding who Barbalien is.

A lot of Jeff Lemire’s Black Hammer characters are pastiches of other fictional characters. There’s clearly a lot of Martian Manhunter in Barbalien’s DNA. He’s a shape-shifting Martian. He has a secret identity as a police officer. And his name “Mark Markz” is patterned after “J’onn J’onzz”.

But there is also a bit of John Carter evident in the character. Primarily, the depiction of Mars and its society. And the fact that Barbalien is known by the epithet “Warlord of Mars”.

But I also see a lot of the Mikaal Tomas Starman, particularly as he was portrayed in James Robinson’s Starman. While not Martian, Mikaal was an alien considered a traitor to his homeworld like Mark, and pursued to Earth by other members of his alien race.

More significantly, both characters are gay. Mikaal was deeply involved in the nightclub scene in his past. And in this issue, we see Mark stepping into a gay nightclub for the first time in his life.

Barbalien’s sexuality is a big part of this story. Both worlds he lives in are strongly homophobic, forcing him remain closeted. On Mars, we see that his sexual orientation is considered part of the crimes that earn him a death sentence. On Earth, he risked opening up to a fellow police officer. But that officer, Cole, is repulsed by this, damaging their working relationship.

However, there still is nuance in their relationship. While he is uncomfortable with Mark, he keeps Mark’s secret, telling him, “Only reason I didn’t report that shit you pulled on me to top brass is ’cause you’re a damn good cop”. The stated reason is respect for Mark’s ability to do his job well, but I suspect there is more to it. Perhaps Cole still feels friendship for Mark, even if he can’t bring himself to acknowledge it. It will be interesting to see if his thinking changes over the course of this story.

It’s also interesting that the officers find themselves responding to a protest about the US government’s lack of action in dealing with the AIDS crisis. This is particularly topical, considering the similar poor response to Covid-19.

Also, it gives Barbalien a conflict of conscience in dealing with the protest’s leader, an openly gay man waving a Pride flag. As a police officer, he feels obligated to help quell the protest, but as a closet gay man, he sympathizes with their cause. As Barbalien, he acts to save the life of the agitator, but as Officer Markz, he arrests him afterwards.

Mark Markz is still figuring out his sexuality and whether he should explore it or remain in the closet. He lives in a world that pressures him to keep it hidden, but he discovers a place where he can explore his sexuality while still keeping his true self secret in the outside world.

Mark Markz is on a journey of self-discovery that many can relate to, whether they are LGBTQ or not. We have seen the final Barbalien that emerges from this journey in Black Hammer, but it is fascinating to see him as he is just starting out on it.

I could find no fault with this issue. It’s still early in the story, but it’s off to a strong start, and knowing Jeff Lemire, I trust the story won’t go off course. I’m not familiar with Tate Brombal’s work, but if Lemire trusts him with Barbalien, then I’m sure he is capable of doing honour to the character.

Barbalien: Red Planet #1 is an intriguing start to Lemire and Brombal’s story. Already there are signs that this will be a powerful story. This miniseries is must reading for an Black Hammer fans. And if you haven’t discovered Jeff Lemire’s superhero universe yet, check it out anyway. You won’t regret it.