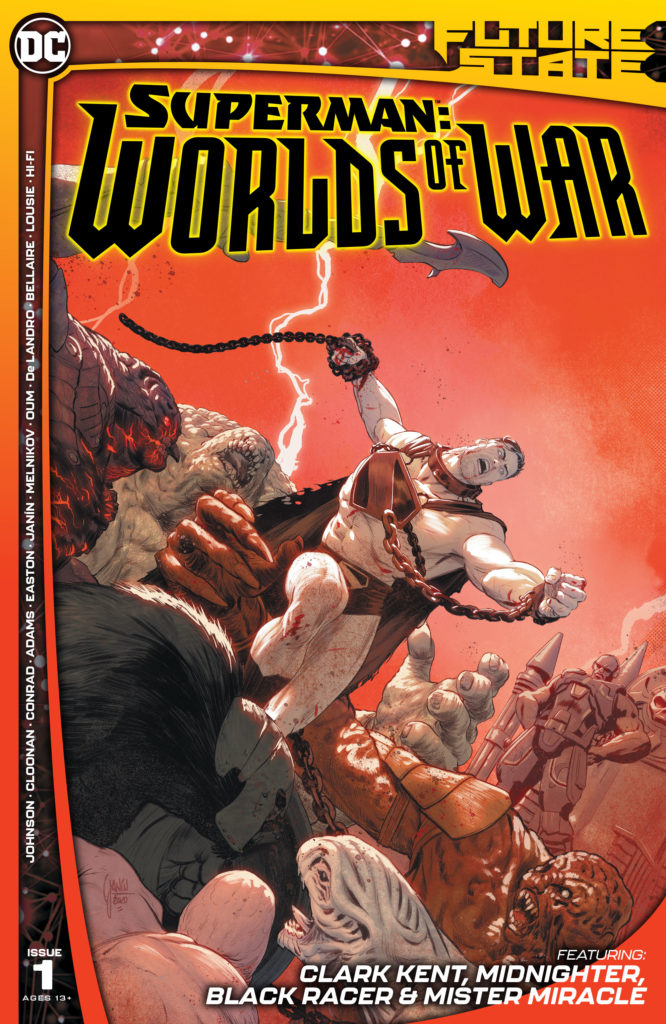 “The words of Kal-el.  Hear them!” – Street Preacher

Future State: Superman: Worlds of War #1 – This monumental Future State title features four big stories!
First, Clark Kent is gone, leaving a Superman-shaped hole behind. People gather in Smallville to celebrate their hero, little realizing that he is across the galaxy helping others.
Superman has gone to Warworld, where he fights as a gladiator in the deadly pits of Mongul. But this is Superman we’re talking about-and his idea of a victory does not line up with the expectations of Mongul’s hordes!
Meanwhile, on the other side of Warworld, other agents are at work, struggling for a better life. Shilo Norman, the man known as Mister Miracle, has ridden a Boom Tube across the cosmos from Metropolis to finds himself at odds with an entire planet!
At the same time, Midnighter, the greatest fighter from Earth, is punching his way through a whole mess of trouble. He’s on the hunt for a new energy source deadlier than Kryptonite. His goal: to shut it down before it gets unleashed on an unsuspecting universe.
On top of that, the Black Racer, a girl raised in the slums of Warworld to be one of its top competitors, turns betrayal into a crusade to fight for the freedom of others like her. 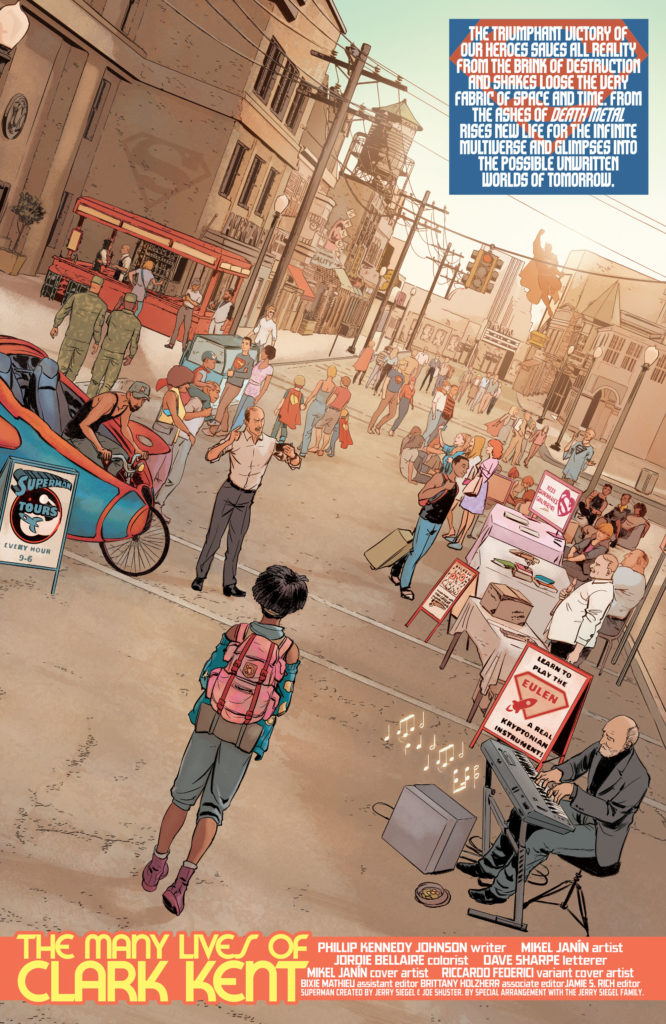 Future State has proven to be a clean slate to open up channels from all the different Multiverses.  To say it is hard to keep up with all that has happened since the defeat of The Batman Who Laughs and Perpetua is an understatement.

As each issue provides, this is a glimpse of what could be in a few years in the DC universe.  And as usual, Clark is off saving the entire universe.  Everyone simply doesn’t know it yet, as Phillip Kennedy Johnson gives us a Messiah type story of Clark Kent/Kal-El.

What does Earth do when we lose our greatest hero?  We’ve gone down this path before with The Death of Superman.  But there seems to be something very different in this one…religious overtones abound and “Disneyesque” sales of trinkets in Smallville.  Replace the prayer handkerchief and vials of oils with stones from the field where his infant rocket ship crashed.

It’s quite the commentary of how much a treasure he is to the world, and how Earth looks to the sky for help in one form or another. 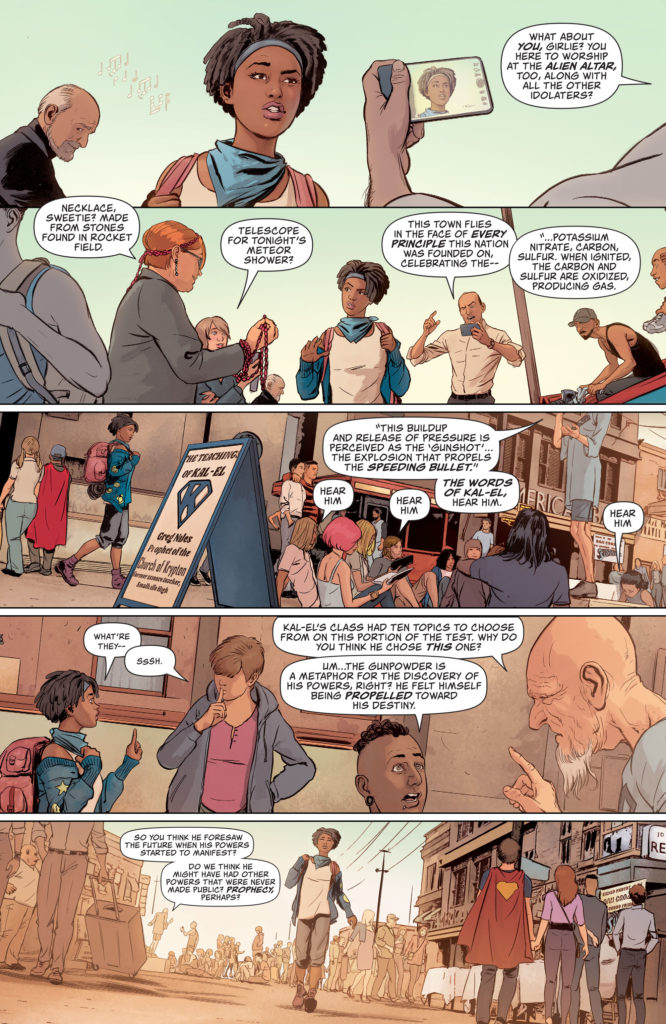 With Future State, the slate is clean.  Authors and artists are free to revisit some characters we have not in some time.  Midnighter and Mister Miracle are two of those, however, I have become quite spoiled in the DCeased landscape in seeing characters from my childhood reading being used.

Mister Miracle and Midnighter’s stories are on a collision course with what Supes is in the midst of experiencing now.  It’s all things Mongul…Darkseid…WarWorld. 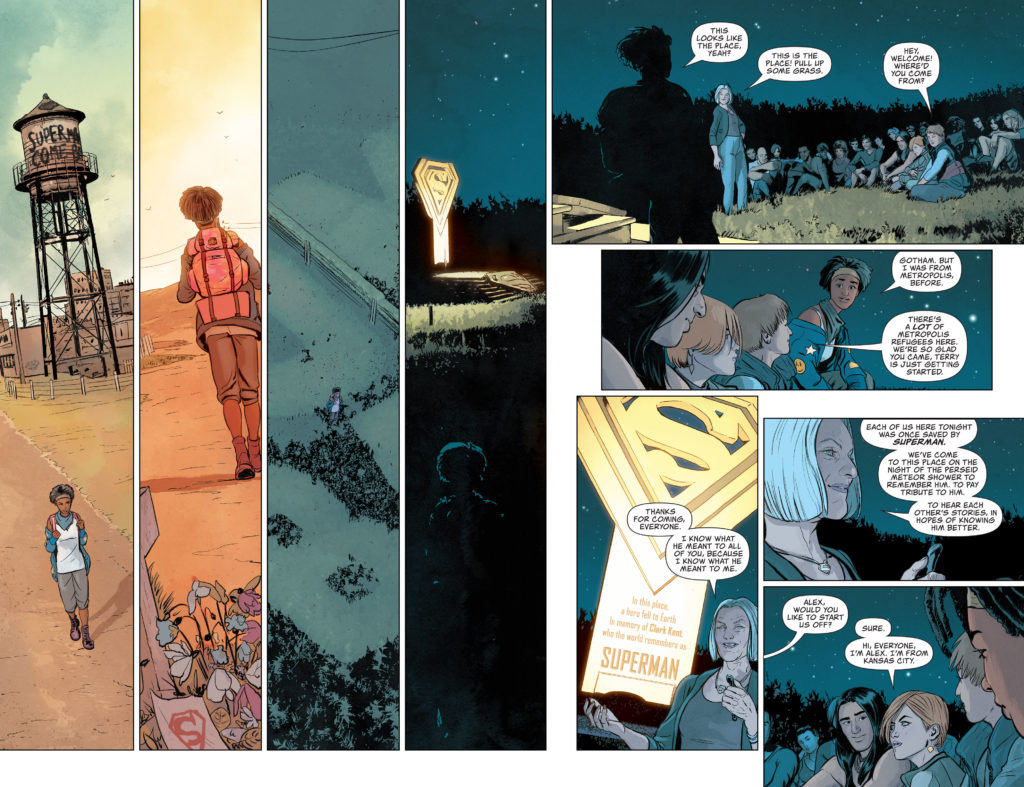 I’ve seen this start before…Hulk was in the midst of a battle arena within the pages of Marvel.  While the story has a start similar to that of a warrior on Planet Hulk, this has the potential to be something more.

While not a negative, dear readers of Superman do not want a “rinse, wash, repeat”, but the comic landscape can be treacherous sometimes.  Here’s hoping this one is not as Marvel is opening up its own Batman Who Laughs with King in Black. 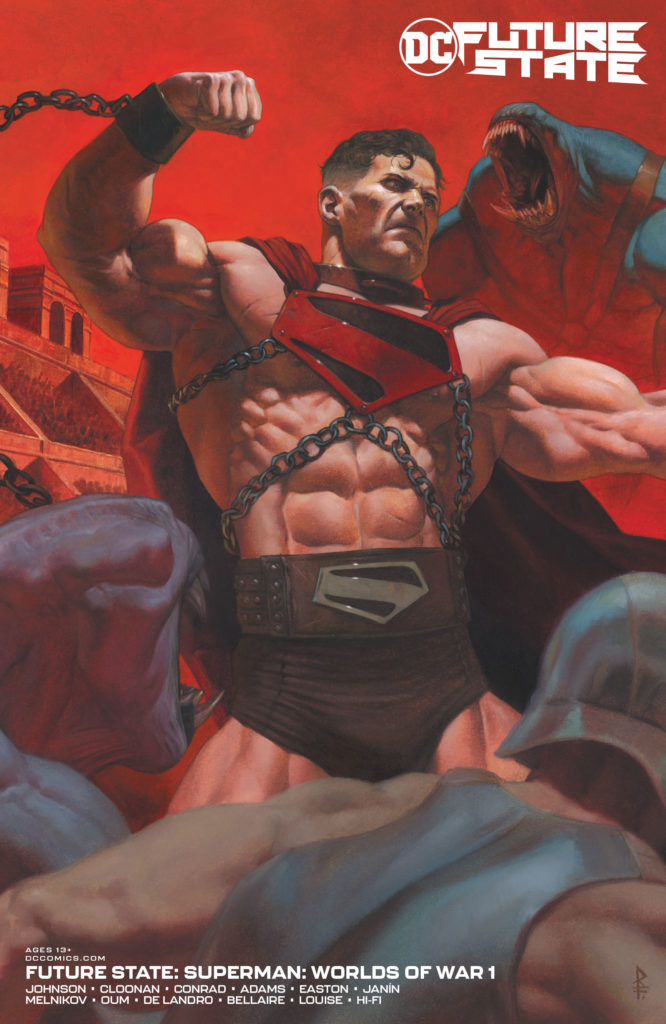 Midnighter reeks of a Batman/Punisher vibe and Mister Miracle is always good for a bit of fun!  Throw in the Big Blue Scout for the fight of his life (only thing better is to see him face Doomsday again) and we have an event on our hands!