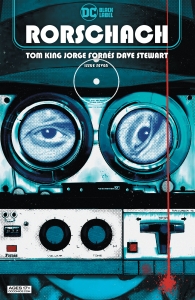 Rorschach #7: Wil Myerson might have been the creator of Pontius Pirate, the most popular comic in history, before he put on the Rorschach mask and tried to kill a would-be president, but he’s not the only artist who worked on the character. Other artists fell under Wil’s influence, and now all these years later, his more renowned acolyte has fallen sway to Laura, the #1 Myerson superfan. Is it possible she influenced another comic book legend into playing vigilante? The key here is that tape the detective is trying to decipher, the one with the séance that has been haunting him since the very first issue! All this and a cameo by Dr. Manhattan to boot!

Upon reading Rorschach #7, my first reaction was “What the hell did I just read?!”. I had to stop and give my mind a chance to come to grips with the story before I could adequately articulate how I felt about this issue.

Rorschach #7 definitely takes the prize for the most unexpected reveal in a comic title ever. Last issue ended with our unnamed detective meeting up with Rorschach, or at least someone wearing a Rorschach costume. This immediately raised the question of who this Rorschach was. I wasn’t even sure that we would learn the identity of this Rorschach, but a number of possibilities existed. It could have somehow been Walter Kovacs or Wil Myerson somehow back from the dead. But I considered it more likely that it was yet another person taking up the identity of Rorschach.

Well, I was right about that, but I didn’t expect who it would be that put on the mask. It wasn’t some random minor character. Nor, was it some entirely new character. It actually was a real person – someone well known to comics fans: Frank Miller. Yes, that Frank Miller. Well, actually, it’s the Frank Miller of the Watchmen Universe. But still, essentially the real world Miller.

This ties in to that tape of a séance the taped séance that the detective was listening to in the previous issue. This new Rorschach reveals the story between that seance and another more recent one. These séances purportedly allowed communication with Doctor Manhattan. Manhattan’s messages instructed Myerson to become Rorschach and then “Kill Turley”.

I doubt that Manhattan was really sending messages this way, but will the detective come to this conclusion? Or will he hear a message in the tapes himself? I wonder if that’s where this series is heading.

I like that it isn’t made clear to the reader whether or not the messages are audible on these tapes. This being a comic, we can’t hear the noises. Instead, we see the onomatopoeic sequences of lettering that appear to be gibberish. No message is apparent in the lettering, but the inability to actually hear it leaves the possibility open.

Amazingly enough, the first séance apparently actually happened pretty much as related here. According to an autobiography of Otto Binder held a séance to contact his late daughter and Frank Miller was in attendance. I wasn’t able to find any reference to Frank Miller corroborating or denying the story, but I presume King has been in contact with Miller. I would expect DC to allow Miller’s inclusion without his express consent.

I love that King created an analogue Miller’s comic book masterwork in a world where superhero comics fizzled out, to be replaced with pirate comics. Miller tells the detective that he put out The Dark Fife Returns in 1985. And the character he describes is pretty much a pirate version of Batman.

When a story gets this bizarre, it’s either amazingly good or an incomprehensible mess. While the story is bordering on the bewildering, it hasn’t crossed the line into incomprehensibility quite yet. 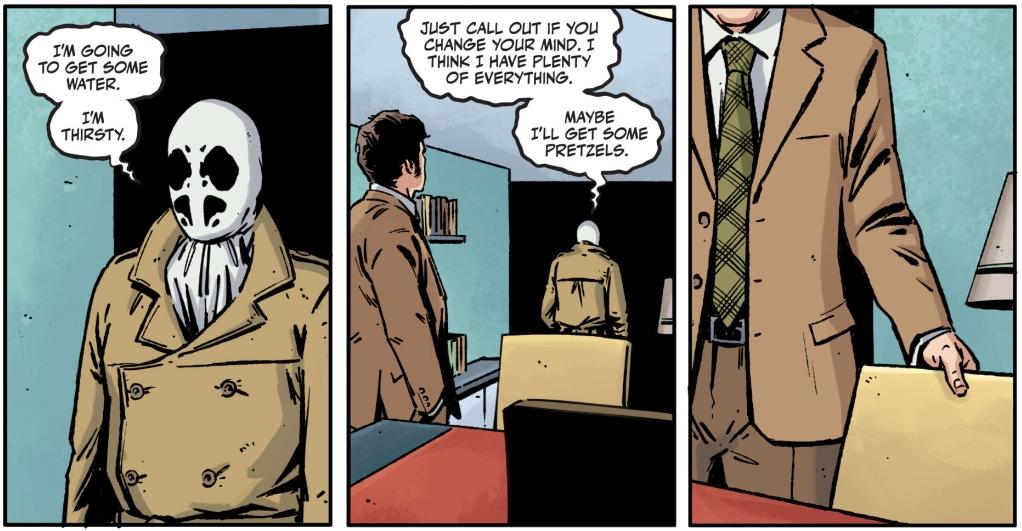 Just when I think I have this story figured out, King pulls the rug out from under me. And each time he does so is an absolute delight. King and Fornes are creating something here that transcends ordinary superhero comics.