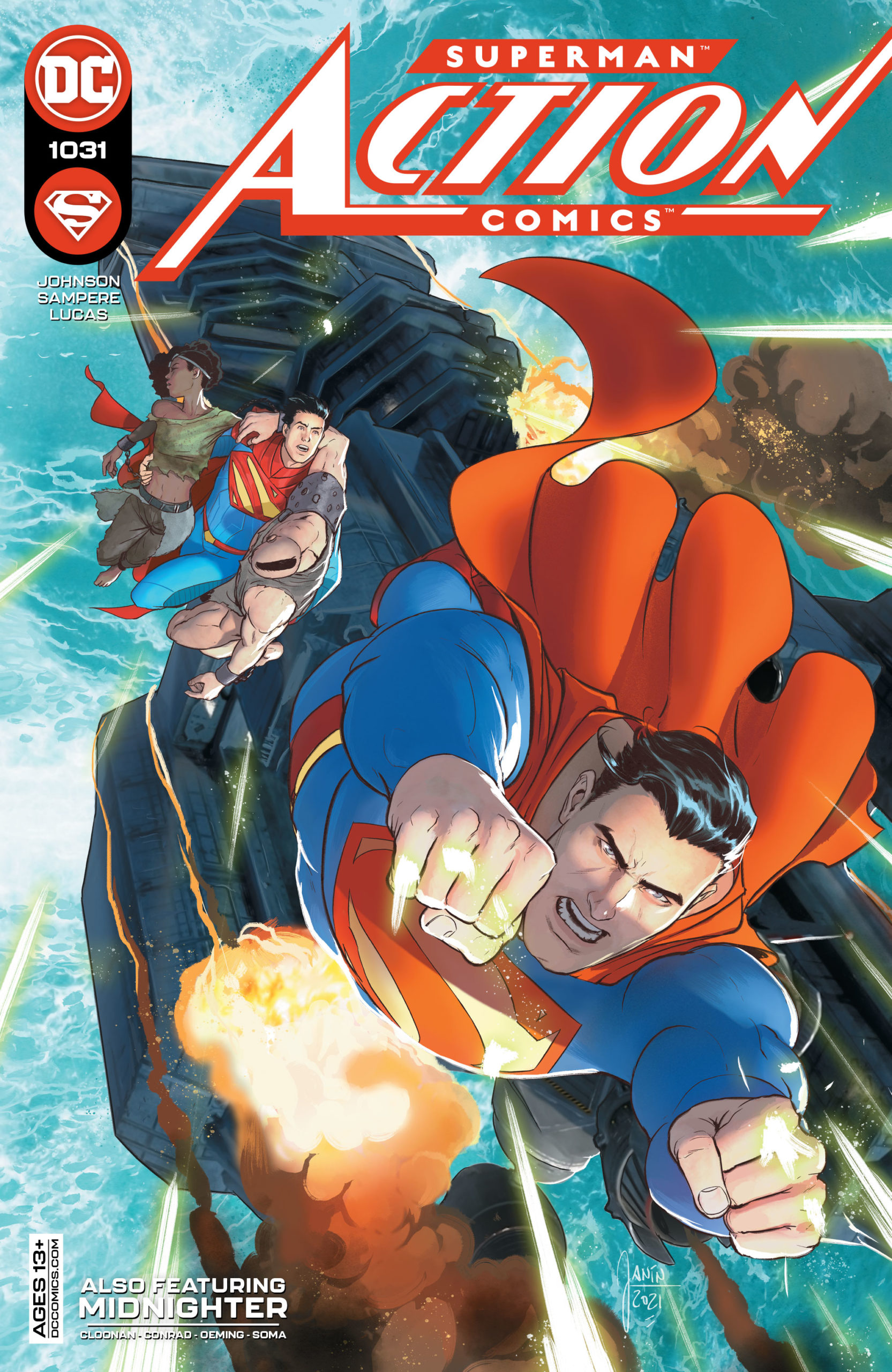 Superman learns a little bit more about the possible Kryptonians who have escaped Warworld and crashed on Earth, while Midnighter continues to keep his secrets from Apollo.

This issue opens with some classic Superman action, and it really only gets better from there.  Action Comics #1031 is the strongest issue of the title since Dan Jurgens ended his run back in issue #999 and his finale in Action Comics Special #1 almost exactly three years ago.  After rescuing the survivors of the crash, Superman turns to the Atlanteans for assistance in discovering the origins of the ship.  It’s nice to see Superman interacting with other parts of the DC Universe, but the sequence really serves to deepen the mystery of the crashed ship.  Johnson includes a few curious details that make the craft and survivors even more enigmatic than they are. 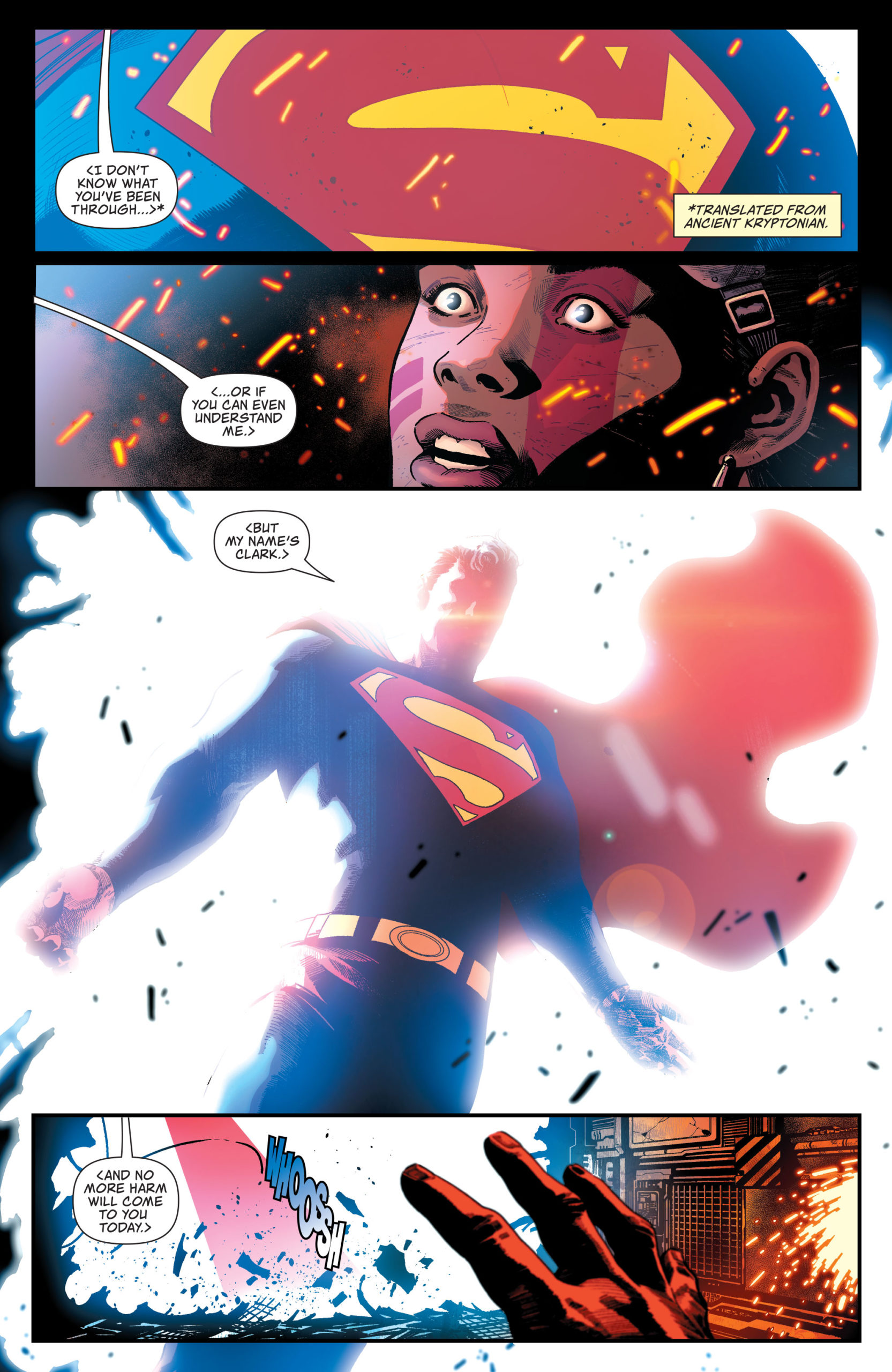 Superman and Jon take the survivors to the Fortress of Solitude where along with Lois and Kara (Supergirl), they give them the medical attention they need.  Again, what they discover about the survivors deepens the mystery and you can see that Superman and Kara are shaken by some of the things they discover.  There’s a little bit of archaeology and a little bit of anthropology thrown in to make things even more interesting.  Even Lois comes up with a theory that she wants to share, but doesn’t get to, yet.  They are all working together and it’s a really nice feeling of family and camaraderie between the three of them.  It’s some subtle character work that dovetails nicely with the big mystery that they are investigating.

It’s a beautiful melding of plot, character, pacing and surprises.  It has the right amounts of everything.  Even the action at the beginning sets the stage perfectly for the more cerebral and emotional beats throughout the rest of the story.  It’s the kind of story that would be great to give to someone to check out the series.  It casts Superman in a story that may be a little outside his comfort zone, having to utilize detective skills (though this shouldn’t be that foreign as a reporter) but, it’s not the kind of story that we usually get with Superman. 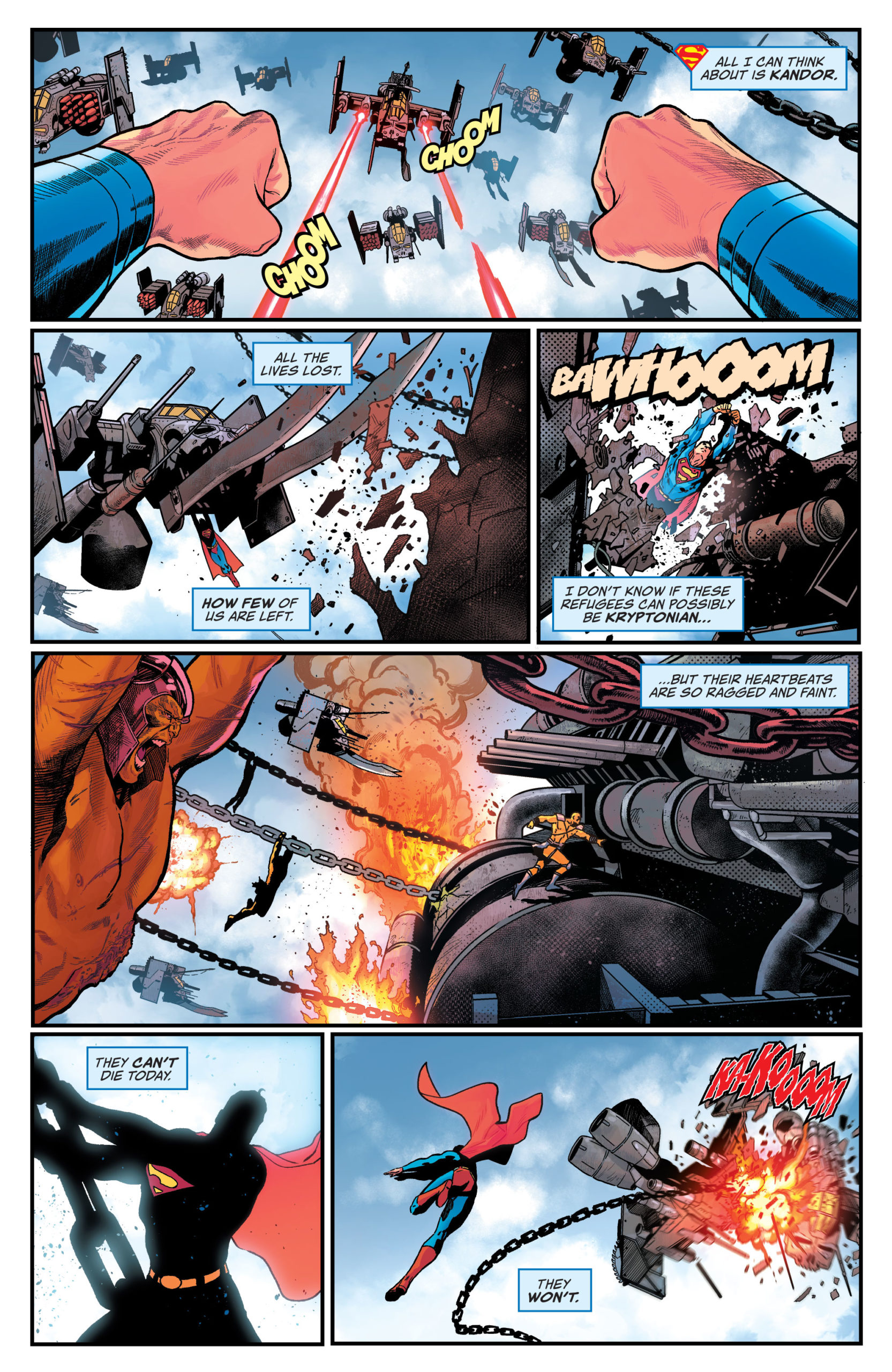 Not to be outdone, Cloonan and Conrad show they know exactly what they are doing in the Midnighter second feature as well.  Things don’t go exactly as planned and Midnighter is unable to test his theory of killing Trojan.  It puts Midnghter face-to-face with a hurting and inquisitive Apollo who just can’t make sense of Midnighter’s behavior.  Midnighter remains reticent and drives the wedge between them even deeper.  It’s a well written scene that many of us have encountered in our lives when we fail to communicate and hurt the ones we love.

Of course, this is not the normal situation as Midnighter is from the future and only he knows what secrets he’s really hiding.  Again, the last page provides a surprise that not only pushes the story forward, but in new and unexpected directions.  Curiously, there’s a mention of Warworld in this tale and it one can’t help wondering if it indicates that it will somehow tie in with the current Superman arc that involves Warworld in some capacity. 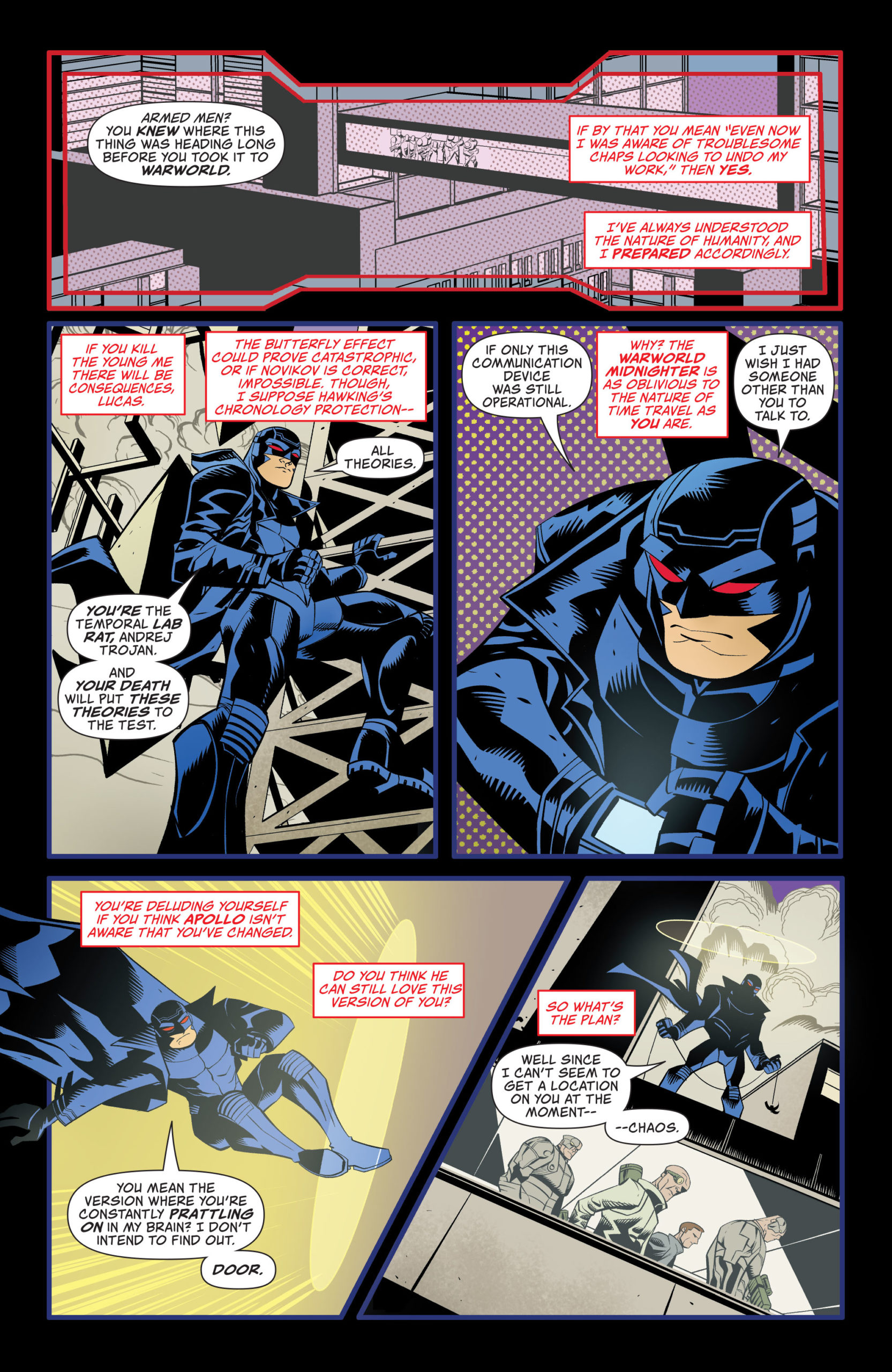 This writing duo is working this shorter page format just right, not only keeping everything balanced, but also finding a way to surprise the reader and ensure he or she comes back for more.  The pacing is just right and the mystery is tangible.  It’s not easy to do it in eight pages, but Cloonan and Conrad don’t seem to be aware of that!

Action Comics #1031 is a great issue for art as well.  Daniel Sampere delivers on some truly iconic Superman images and brings the rest of the family to life with equal skill.  The opening crash sequence feels truly cinematic and the equal or better of any such scene in any of the theatrical Superman films.  Michael Avon Oeming keeps things stiff between Midnighter and Apollo while also posing Midnighter with very effective “I don’t care” attitude that belies the fact that he’s hiding so much.  Adriano Lucas’s colors keep the Fortress of Solitude light and airy, evoking not only grandeur, but hope.  Meanwhile, Taki Soma maintains Midnighter’s demeanor with her color palatte, utilizing bright stabs for only the most meaningful moments.  The hints of Kirby in Oeming and Soma’s work on this feature seem to come to fruition by the end of this tale. 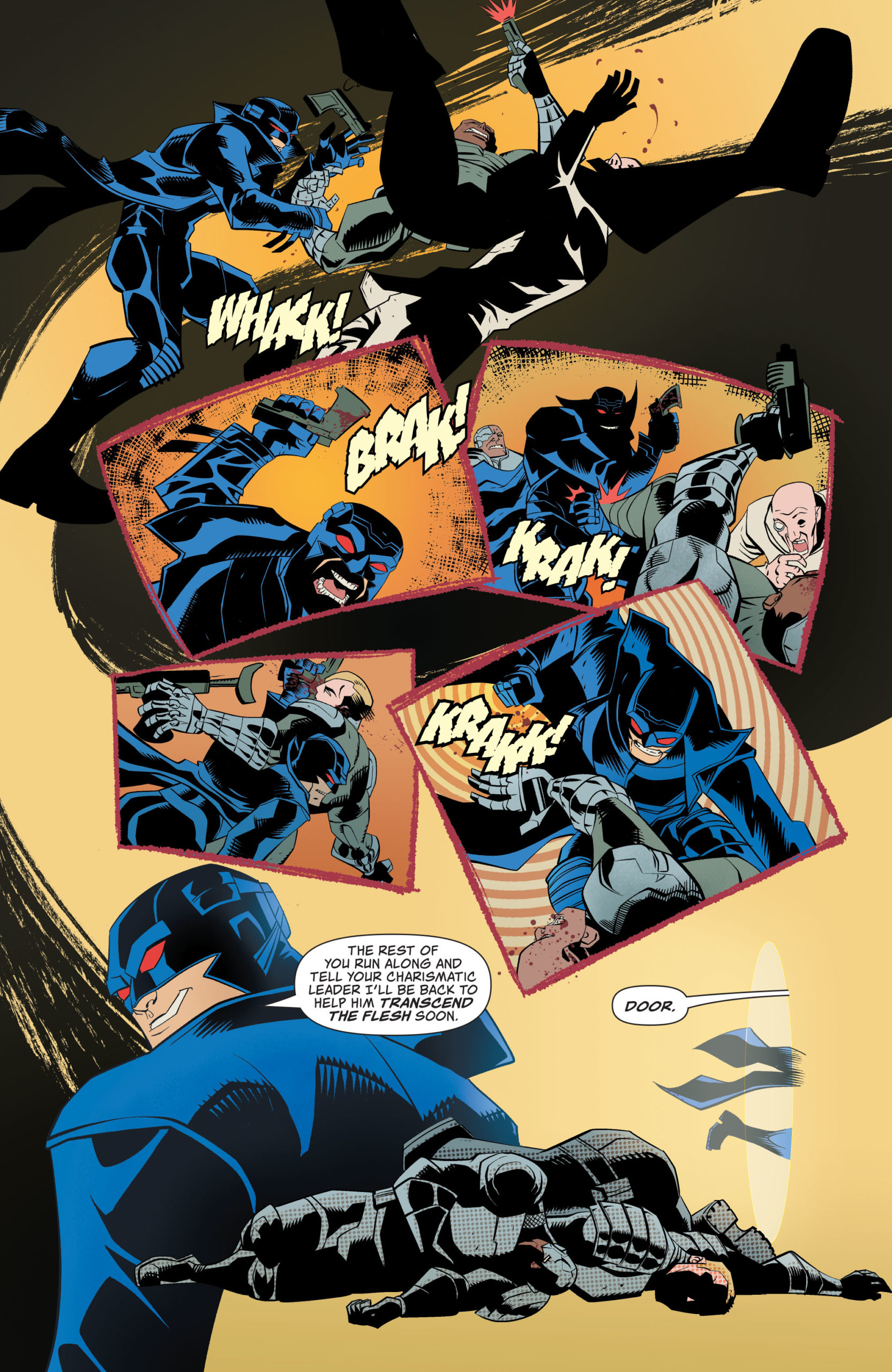 There’s only one negative for Action Comics #1031, and unfortunately it’s Jon Kent.  He’s just sort of awkward in this issue.  While that becomes part of the narrative, as both Lois and Kara notice it, it doesn’t make him an enjoyable element.  He just sort of distracts from what’s really interesting.  While his attitude stems from the subplot concerning his belief that Superman will die soon, it doesn’t help the main story.  Nor does it really feel like it’s working.

Ever since Jon returned from his sojourn in space with Jor-El, he’s had it tough.  Brian Michael Bendis sent him to the future to work with the Legion of Super-Heroes, but that struggled to last 12 issues.  It doesn’t seem like this direction is really working for him either.  While he’s getting the spotlight, come July, one can’t help but feel that it will be temporary as well.  He was really working well in Superman under Tomasi/Gleason and with Damian Wayne as one of the Super-Sons.  This issue is a perfect example of how writers are struggling to find a way to fit him in, he’s not got much significant page space and everything else in the issue is so good, you nearly forget he’s there.

Give this one to your friend if they aren’t reading Action Comics.   Both features are being produced at a high level and will keep you coming back for more.  Interestingly, both features are doing the same things well.  Character, mystery, surprise and excellent pacing and storytelling make for an extremely strong issue.  Jon may not be finding his way, but Superman is feeling nearly perfect and Midnghter is right there with him.