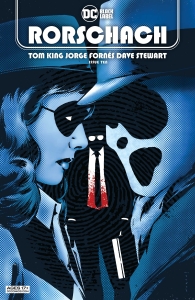 Rorschach #10: Who would have benefited from the assassination of a presidential candidate? Rorschach and Laura didn’t operate in a vacuum. Their actions touched a lot of different people. In his continued efforts to unravel how the pair got from their stark beginnings to almost killing Governor Turley and derailing an election, the detective on the case starts to look at what other law enforcement agencies have uncovered, and any potential links back to the Oval Office. To do that, it’s time to relive the crime that almost was. Things are heating up as this miniseries set in the Watchmen universe nears its conclusion!

In Rorschach #10, we see the unnamed detective informing Governor Turley’s aide about what he’s discovered. He goes into detail about how his investigation led to his discoveries. The detective has figured out the general picture of the attempted assassination of Turley, but he’s not quite finished yet.

Last issue, the detective found a corpse on the farm where Will Myerson and Laura Cummings planned their crime. The corpse had a pager that connected him to President Redford’s campaign. In Rorschach #10, the detective discovers the man’s identity (Jonathan Oates). And then he follows a trail that uncovers the specifics of Myerson’s plan and how it failed.

The detective has nearly put the whole picture together, but he states, “I’m still missing a piece”. He doesn’t yet understand why there was a confrontation between Oates and The Kid, that resulted in his death.

There is also a big hint that the detective suspects Turley’s aide in being involved in the plot. I like that King doesn’t come out and state this, but shows it in a way that anyone familiar with detective stories would pick up on. In Oates’ safe there is an empty beer bottle. It seems an odd thing to keep in a safe, unless it’s some kind of evidence. The detective uses a handkerchief to pick up the bottle. It’s apparent that he’s making sure not to contaminate the bottle with his fingerprints. This implies that there are fingerprints relevant to the case already on the bottle. 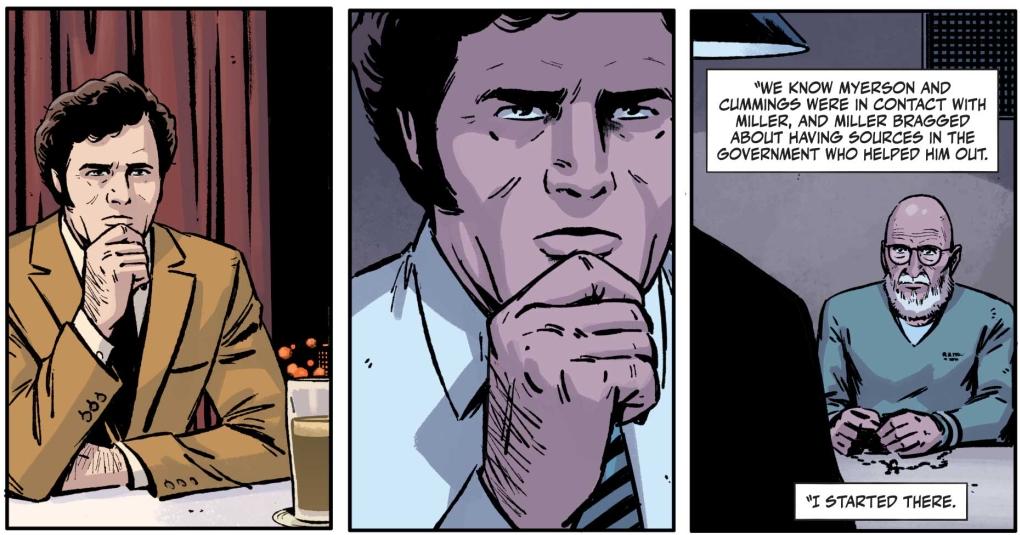 Later, after his talk with Turley’s aide, the detective does the same with the beer bottle the aide was drinking from. It seems the detective is planning to compare the prints on both bottles. The detective clearly suspects his involvement in the plot. And given his track record so far, I would wager that he’s not pursuing a false lead.

This entire series has been more of a standard detective story than a superhero story. The fact that some of the characters wear superhero identities seems almost irrelevant. But is this misdirection on King’s part? Could the wild theories about Doctor Manhattan enabling the spirit of Rorschach to inhabit others actually have some merit? This issue certainly seems to point to a more mundane solution to the mystery, but I suspect King will leave room for speculation at the story’s conclusion.

I also have to commend the superb work of artist Jorge Fornes. This is a rather complex story, and a good artist greatly assists readers in following such a story. When a project like this has an especially notable author, the artist’s contribution can sometimes be overlooked. But Fornes’ deserves credit for his part in conveying the story King has written. And Dave Stewart’s colours beautifully assist Fornes in doing so.

It can be hard to spot flaws in a mystery story, as mysteries tend to keep back vital information until the story concludes. It’s only with the revelations at the end that everything clicks into place. So, the quality of the story is not entirely apparent until you look back at it after you have finished reading it. However, there is a sense that the story is narrowing in on a definite conclusion. We don’t know what that ending is yet. I do trust that King will deliver a satisfying ending. But if he fails to do so, the earlier chapters will suffer in retrospect. 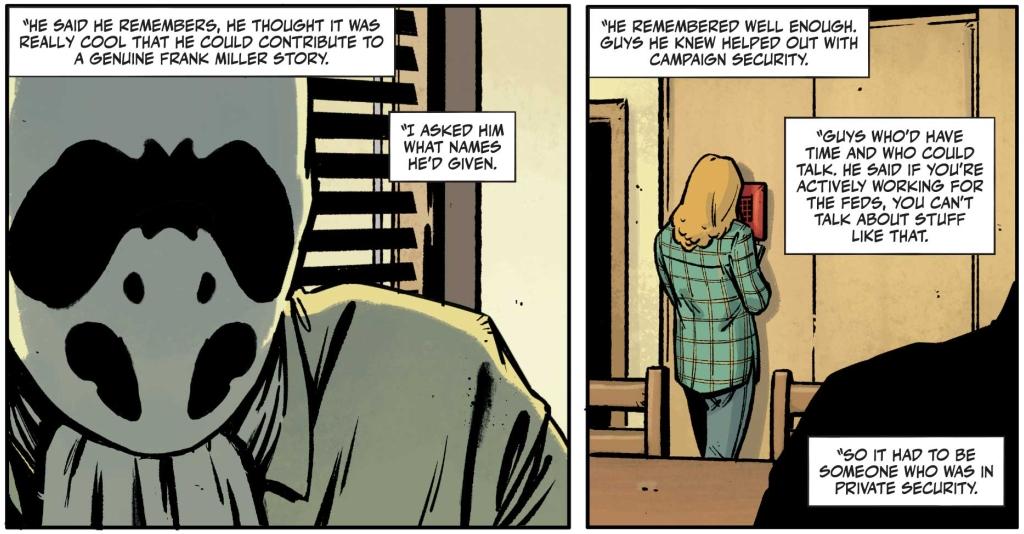 With Rorschach #10, King’s story is zeroing in on the endgame. This series is a fascinating and refreshing departure from regular superhero books. And I’m having fun trying to figure out how the story will end. I recommend to anyone not following this story to get with the program. This is some great stuff.

Titans Unite Against Red Hood In New Trailer For Season 3