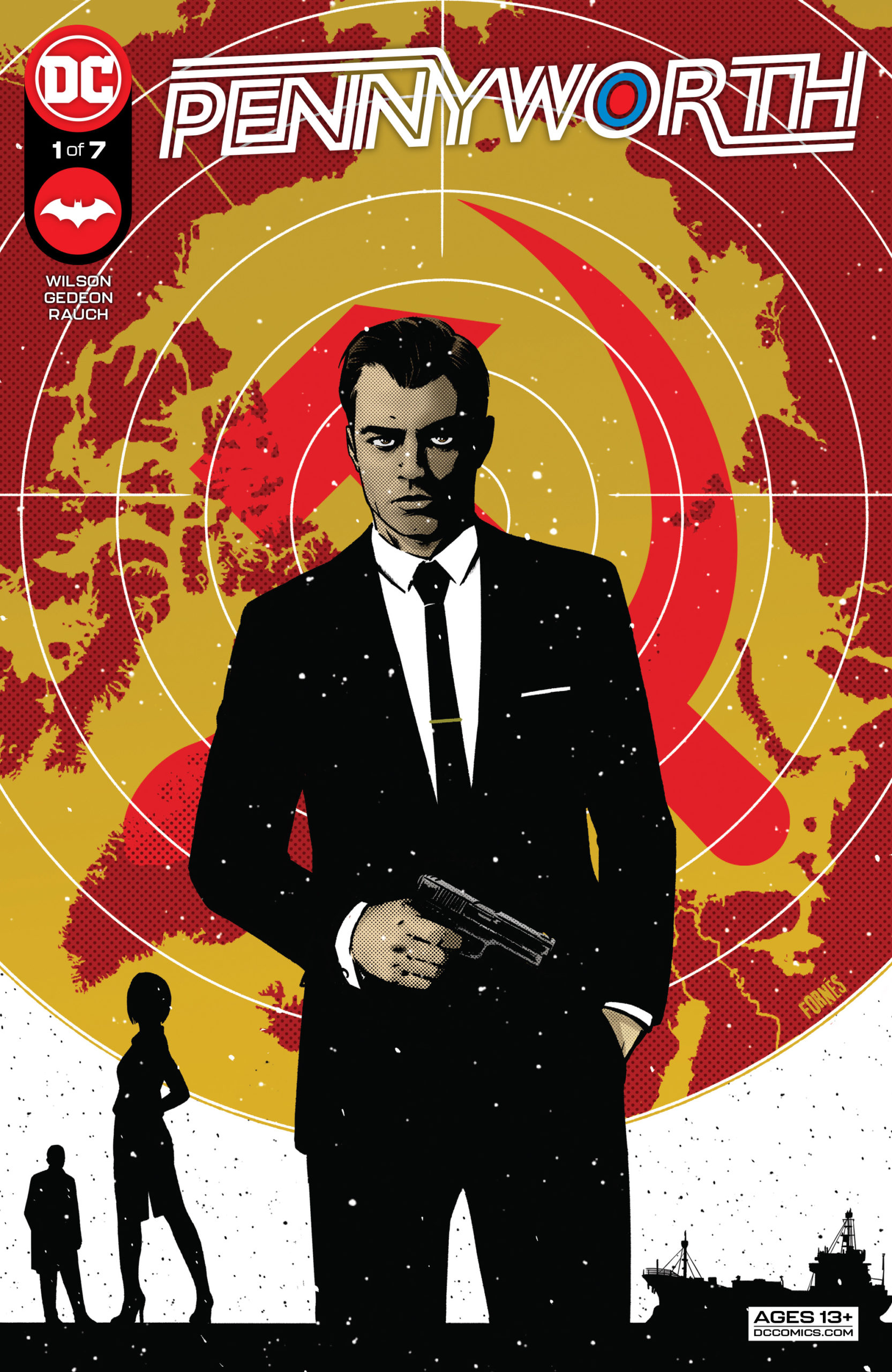 Pennyworth #1 is here and for this reader worth every moment of the wait. To be fair Alfred Pennyworth is not only charming but a beloved character, one that has been further and further fleshed out throughout his years.  But always the want to know more about the man before the butler has plagued me, and I am sure I am not alone.

Spanning the years between the TV series and today, Pennyworth gives a greater insight into Alfred’s time as an agent of MI6. Fingers crossed that questions have been answered, the ones that we flit upon as we read or watched Alfred,. But it remains to be seen.  Scott Bryan Wilson, Juan Gedeon, John Rauch, and DC Hopkins bring to the plate a feast for readers of adventure and intrigue…so let’s dive in!

Everyone Has Something They Fear

Before even cracking open Pennyworth #1 the covers deserve a second and third look hearkening back to the James Bond movies. Genius artwork to say the very least. But the tale within crosses over 3 time-frames in Alfred’s life. Switching between his childhood,  his young adult years, and the present Alfred that readers know best.

With each crossover we learn more about the man who is to follow in his Father’s footsteps and become a Butler. Woven together there is much to digest but the timelines seem to meld just when needed to. In each though action seems to be a reoccurring theme leading him along the way. 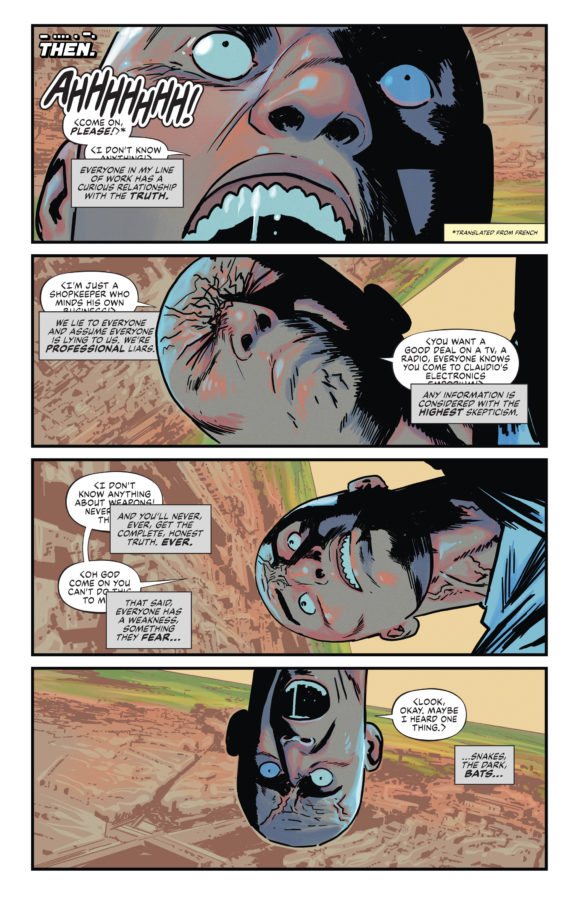 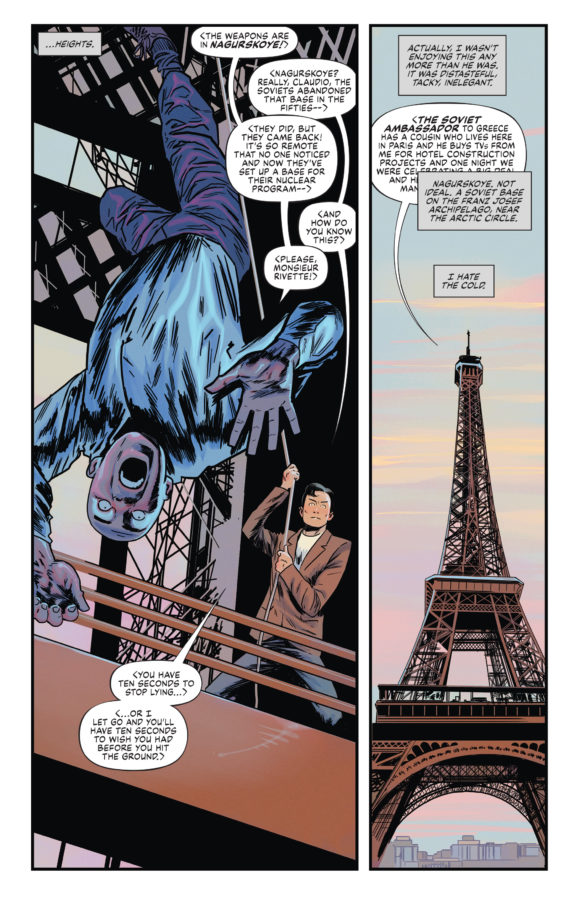 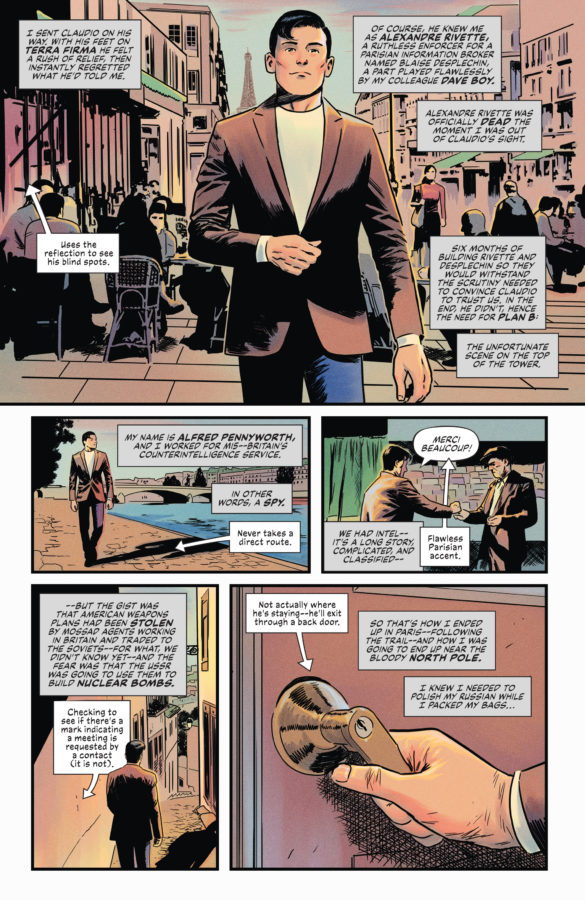 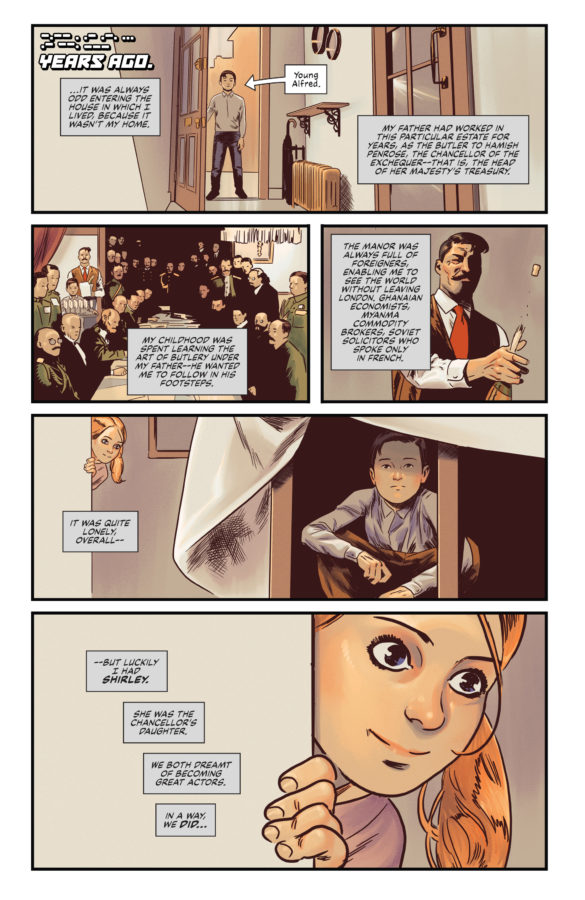 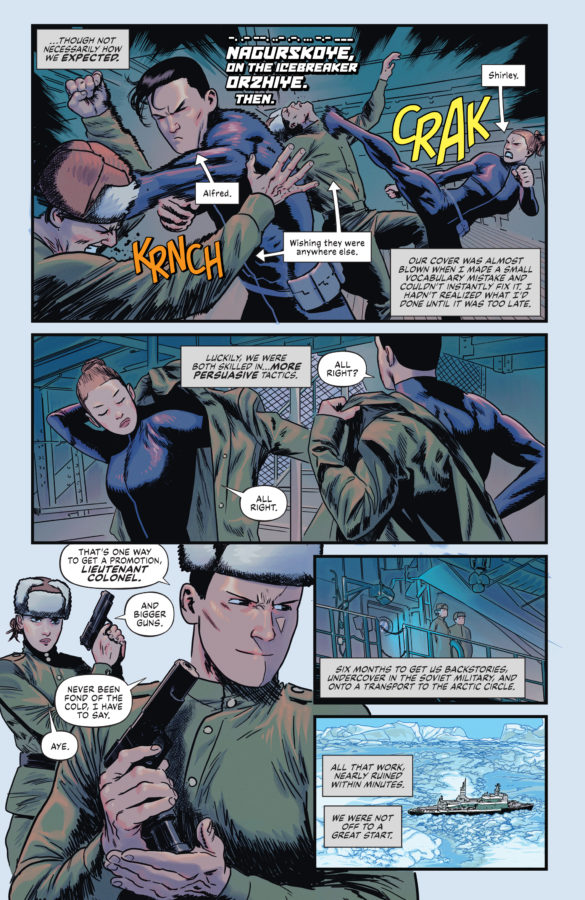 Alfred is reminiscing back to his days in MI6 doing an undercover mission in France. He has recovered Intel that stolen plans for a nuke has recently found a home with the Soviets. Along with childhood friend and fellow spy Shirley Penrose, their mission is to retrieve the stolen plans by infiltrating a Russian ship. Sounds doable enough but as the saying goes, “It sounded good on paper.”

In the present Alfred finds himself in a dreadful enough situation roughed up and in the middle of nowhere. But he knows that there are people who will absolutely know he is missing…right?

With action and intrigue in droves Pennyworth #1 is a jam-packed issue that leaves a reader full and yet wanting more. Having so many details to follow could have been a meshed mess but the flow of the writing and the easy transitions between timelines make a mess impossible.  One of my favorite things is that during the Secret Agent portions there are little side-notes about the extra lengths that Alfred goes through in order to maintain his  cover and they are gems.

The artwork by Juan Gedeon is stunning and the palette chosen by John Rauch matches Alfred’s personality to a fault. Pennyworth #1 honestly almost made want to watch spy movies which is not something I say lightly. But the team give readers an intimate look at the internal workings of Alfred’s mind and it is as charming as one would expect. Also the pet names of Sherlock and Watson for Shirley and Alfred genuinely brought a smile to my face each time reading it.

The funny thing is…this really doesn’t feel like a negative. But there is a moment in Alfred’s childhood where he talks about themes that will define him, ones that are learned after a harrowing experience.  One of the themes made me laugh out loud since I knew what was to come.  He states that he learned it best to stay on the peripheral of violence, death, and danger.

I read this and instantly threw my hands up and laughed at the sheer solemnness of the moment because stating that you want to stay away from these things…but then become a SPY of all things…  it just got my funny bone at the path his life took and the written moment of irony.

I waited for this series because Alfred is a character, that like many other people, I wanted to know so much more about. And honestly could never get enough of.  Pennyworth #1 exceeded any expectations I had for the series and what it would feature. The artwork is pure bliss and the writing is lovely.   If this first issue is only the beginning, it is time to get ready for a brilliant ride. I cannot wait for the next issue!