The Y: The Last Man Panel at NYCC 2021 included Ashley Romans, Ben Schnetzer, Olivia Thirlby, Elliot Fletcher, Marin Ireland, Amber Tamblyn, Juliana Canfield, Diana Bang, Showrunner Eliza Clark. Needless to say, it was great having so many cast-members in person especially given we are still dealing with COVID. If that wasn’t enough Brian K. Vaughn surprised the crowd at the end and artist Pia Guerra recorded a message for fans.

Eliza Clark talked about how the cast and crew dealt with delays during the pandemic and how the approach of the mostly female crew approached filming. “We wanted to photograph people differently, and particularly women, than they have been photographed [before]. We did a movie club with the producers, our designers, and our cinematographers. We suggested movies and then we would watch them and talk about them and talk about how those would translate into our show or how we wanted to avoid it. We watched things from Children of Men to I May Destroy You, to Thelma & Louise. Ultimately, what we decided what the female gaze was, was subjectivity, point-of-view, and detail. You see the roots of hair, you’re seeing skin, sweat, dirt under fingernails. Each scene is shot from somebody’s point-of-view so that you feel like you’re inside of it.” 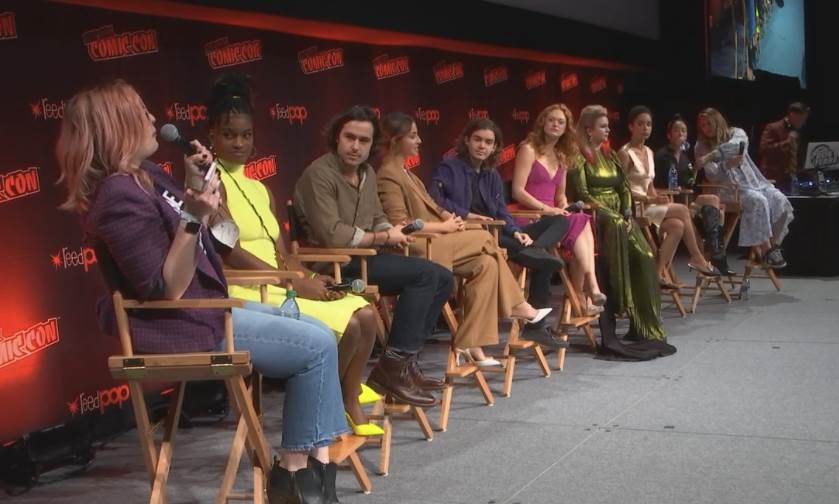 The cast recapped the show’s plot and the groundbreaking way it dealt with gender. After Eliza Clark related how nervous she was meeting Brian K. Vaughn for the first time (Y is her favorite comic of all time) the writer appeared from the side of the stage. “I cannot believe how excellent this show is,” he said.  “I mean, to say that it elevates the source material is such an understatement, I just think it has transformed it. Meeting with [Clark] I was like ‘please, make it your own, make it better.’ I didn’t think you would make it that much better.”

The artist of the comic series, Pia Guerra recorded a message for attendees. “I’m so sorry I can’t be at New York Comic-Con this weekend. But hopefully, in the future, there will come a time where I’ll get to see y’all again,” she said. “I just want to say a big love and a big hello to everyone involved in the show who is here today. You are doing a fantastic job of bringing this show to life, finally, after so many years. It’s incredible every week [and] it’s just a huge honor to be able to see all these characters come to life.”

It is great to see big cons come back and this panel is an example of why!