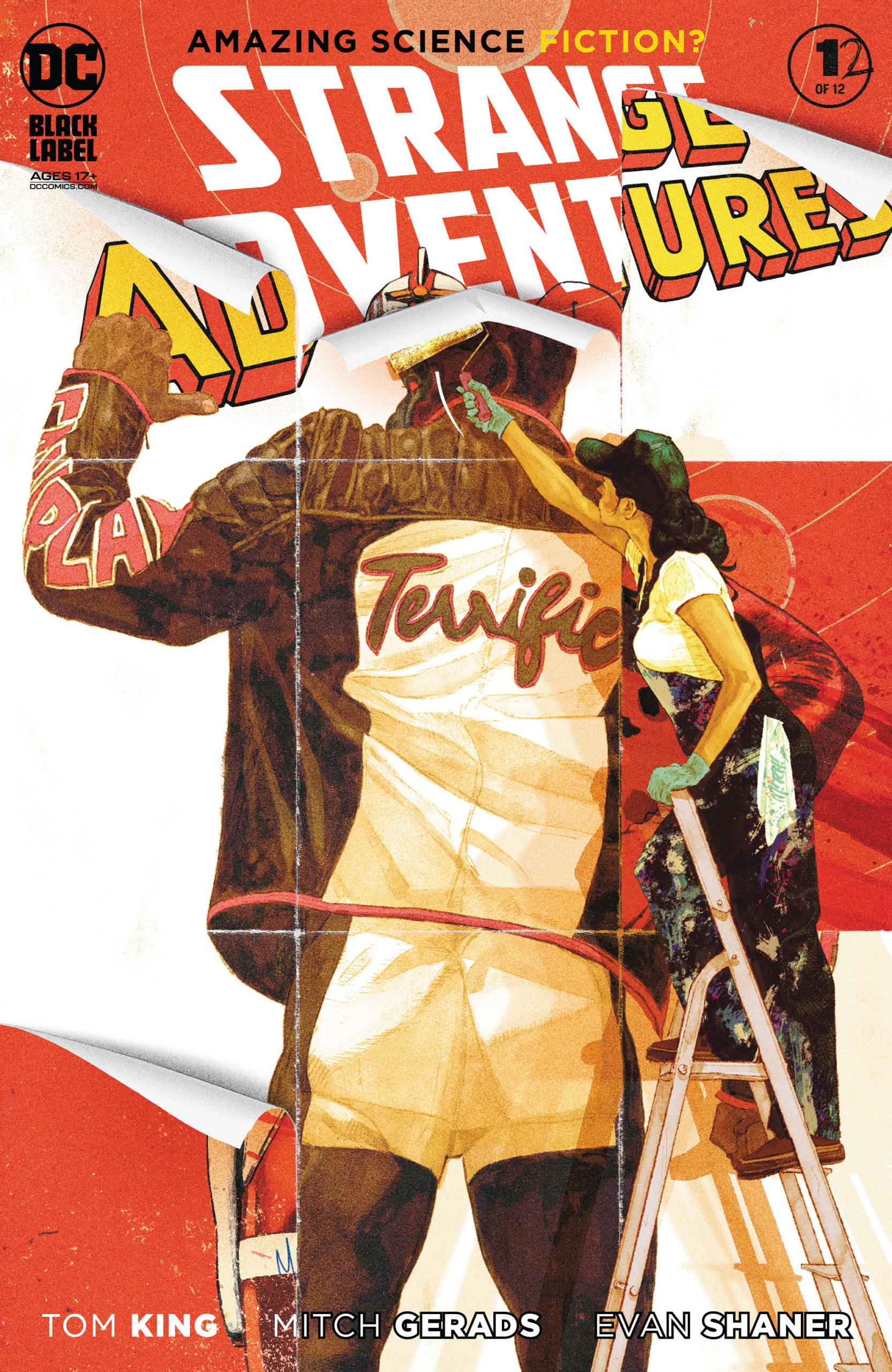 The final fates of Aleea and Adam Strange are revealed as Alanna and Mister Terrific gain an audience with the Pyykts.

Like the rest of this series, the art by Mitch Gerads and Evan “Doc” Shaner is top-notch.  They’ve split the art chores with Gerads handling the gritty realism of the present and Shaner depicting the hopeful past- even if the art of the past is stuff we saw in issue #1.  You’ve seen the previous 11 issues, so you know how good these two are.  Gerads adds the detail that gives that realistic shape to his scenes, while Shaner channels just enough of the Silver Age vibe that you ask yourself- “is this too perfect to be real?”  Both of these artists do their jobs perfectly in telling the story and making the reader believe. 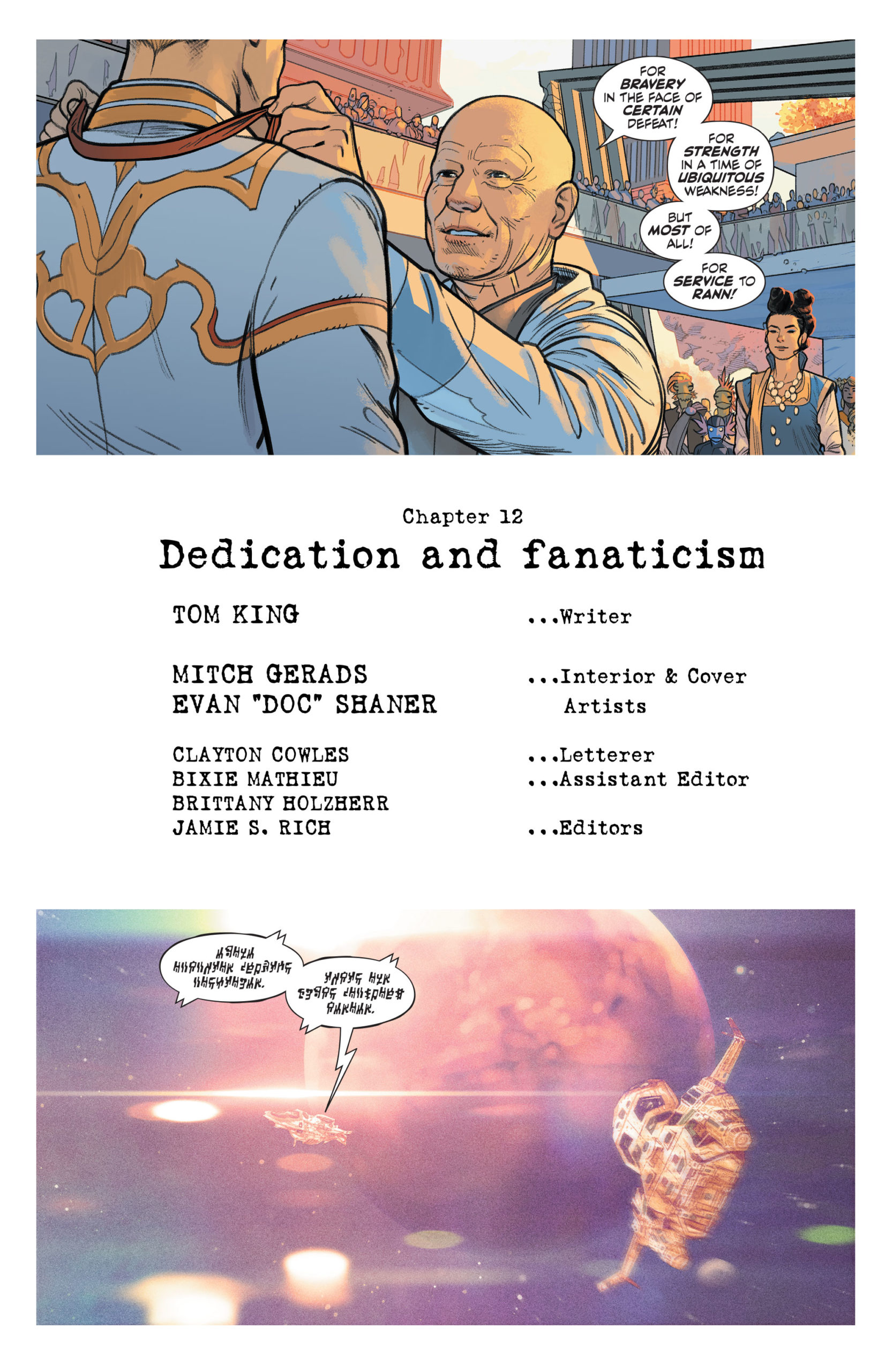 For me, Alanna Strange has always been a good character.  With Strange Adventures #12, Alanna comes full circle as all her questions are answered.  One could argue that in the Silver Age she was little more than a distraction to Adam as he solved all of Rann’s problems.  While I don’t think that’s necessarily true, Strange Adventures #12 gives Alanna her own agency in the story and she is no longer beholden to Adam to save the day. 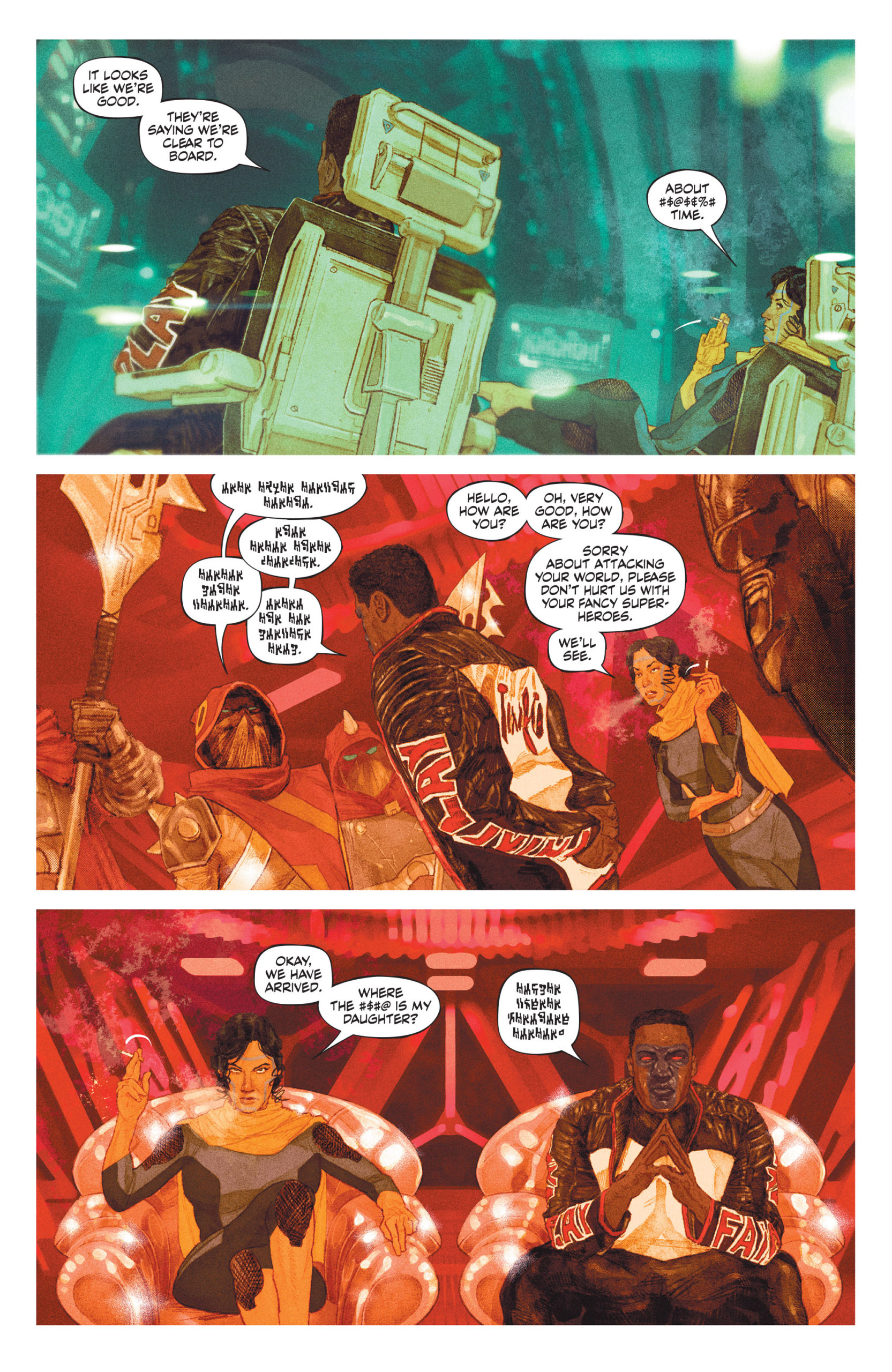 To say that the conclusion of this story is disappointing is an understatement.  It’s been telegraphed since issue #1 that Adam was indeed the perpetrator of crimes.  Are they the war crimes he’s been accused of?  I’d say so, we’ve seen that unfold over the entirety of the series.  Did he trade Earth to the Pykkts in exchange for the life of his daughter?  Yes, that was revealed over the past couple of issues.  Strange Adventures #12 answers any lingering questions about Adam Strange and the strength of his character with his failure and ignominious death at the hands of his own wife.  King breaks Adam completely as we see that his death in issue #11 was real and he’s just as messed up as Alanna accused him of being. 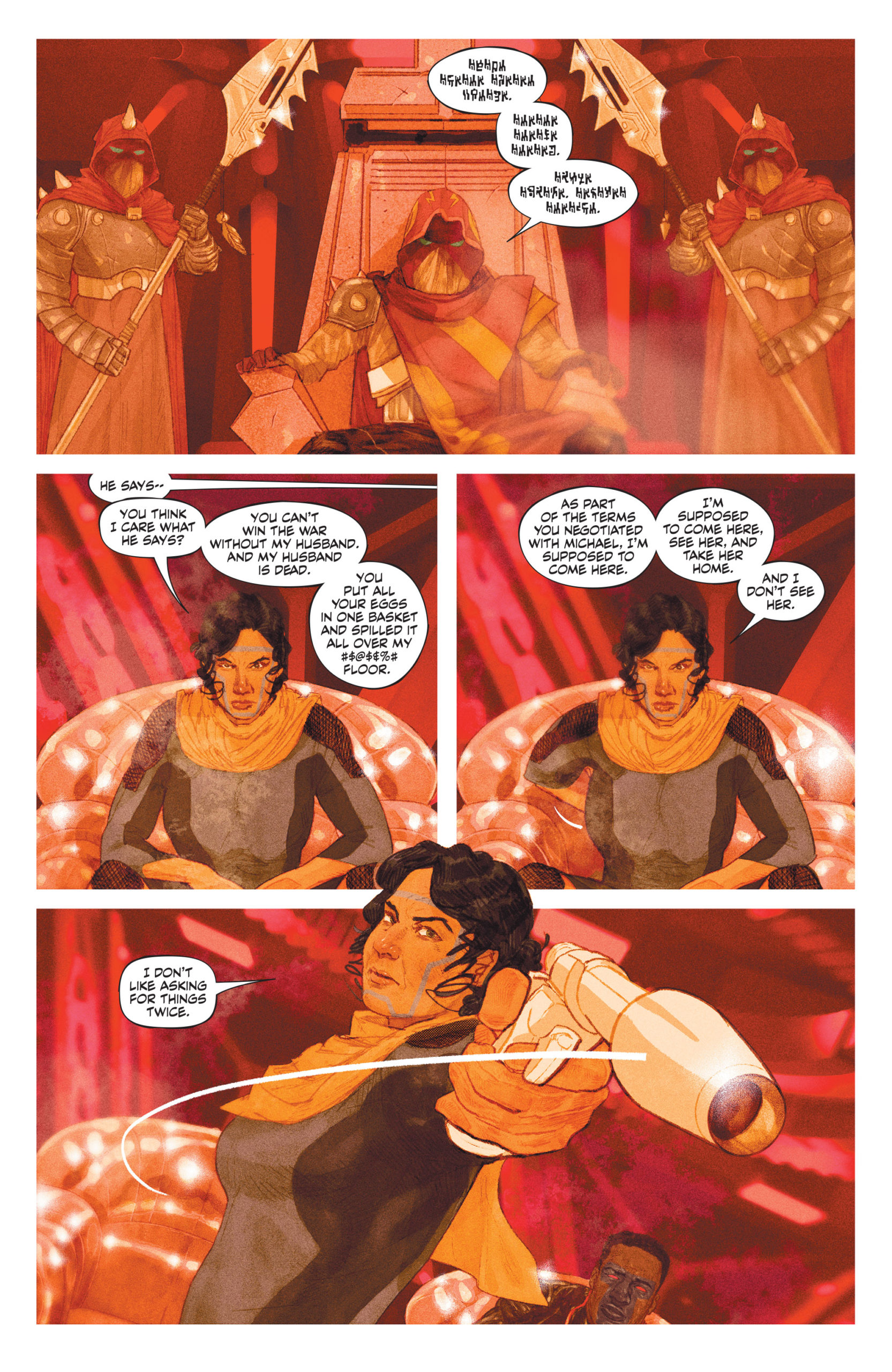 It’s hard to say exactly what the point of King’s story is.  Is he trying to say that despite what he did, Adam is still a hero?  Is he saying there are no heroes?  And certainly there are no perfect ones!  With such a sad and depressing ending it begs the question, “Why would a fan of Adam Strange read this series?”  There’s no doubt the journey has been amazing, well crafted, and beautifully illustrated.  However, the conclusion is hollow and empty.  There is no hope, there is no silver lining, it’s just the mess of life.  And, in the end, both Adam and Alanna have become unlikable.   Perhaps, it’s the muddle of real life that King is trying to bring to the story.  Unfortunately, we’ve seen this before in his Heroes in Crisis which has an equally empty and soulless ending.  The journey with Strange Adventures has been excellent, however, whereas the journey in Heroes in Crisis was abysmal.

Still, with the conclusion, King has left a lot on the table.  There were so many elements along the way that appeared to be a hint that things weren’t exactly what they seemed to be.  At various times I was convinced either Alanna or Adam was not the genuine article and had been replaced.  This story screamed for a twist ending that would reveal a heroic ending for Adam and Alanna.   Or at least one of the two, instead Alanna accidentally kills her husband, and Adam is revealed to have sold out everyone on Earth for the life of his daughter.  We’d probably all consider doing that for our children, but to have Adam do it seems misplaced in the context of Adam’s character’s history.  The story motif in Adam’s Silver Age tales was that he always found a way to win no matter how hopeless the situation.  In having Adam fail and have to trade his home planet, King is following the more recent trope of deconstructing the super-hero.  Perhaps, it’s a bit of a metatextual message that the world isn’t as simple as it was in Silver Age comics.  While that’s true, the real reason people liked Adam Strange was because of the love story with Alanna.  THAT was the draw, that relationship.  Like Edgar Rice Burroughs’ John Carter of Mars and Dejah Thoris, it’s the relationships between the characters.  King manages to destroy that as well, with a revisionist view of their relationship that wipes any semblance of Silver Age sheen away.

We’ve seen this deconstruction succeed wonderfully in other comic books.  Unfortunately, it’s not new and at this point it’s tired.  There’s nothing creative about destroying characters.  It’s been done before and it’s been done better.  And, there’s a specific reason that it doesn’t work for Adam and Alanna.  With these two we have established DC Universe characters, they are the draw for this comic.  If you are reading Strange Adventures, it’s probably because you like the characters.  You can’t destroy the lives and souls of the characters people want to read about.  You can, but it’s not going to be effective, because the loss of the character(s) outweighs any deeper philosophical message.  It’s the same thing that happened with Wally West in Heroes in Crisis.  No one cared about the message King was trying to communicate in Heroes in Crisis because it came at the expense of a fan-favorite character.  Adam is nowhere near as popular as Wally, but it’s the same thing at work.

The reason Alan Moore and Dave Gibbons were able to deconstruct the super-hero genre so thoroughly and mercilessly in Watchmen was because they were using characters that were unique to that story, there were no built-in fans.  There was no shared universe in which they had previously existed.  It was all new and it gave them the freedom to do whatever they wanted and tell the story they wanted to tell.  Sure along the way you get to like Nite-Owl and Laurie, and maybe even Rorschach at times.  But, as disappointing as it is when Dr. Manhattan kills him at the end, it’s not the emptiness one feels when taking all the hero out of Adam and Alanna.  Could you write a Superman story and make him the Ozymandias?  At least in Watchmen, it’s clear who the heroes are even with their faults.  In Strange Adventures, there are no heroes, only victims with no better moral compasses to steer themselves.

Alanna’s soliloquy on life is a depressing examination.  Does she feel this way?  Is one’s life all lies?  I would disagree.  For Alanna, in this story, perhaps it is?  For Tom King, perhaps it is.  King has used his previous life to inform his writing and it often feels like he’s using it as self-therapy.  Unfortunately, grafting these ideas onto Alanna and Adam grossly misrepresents these characters.  It’s fine to write about what’s troubling you, but it has to fit the characters.  This revisionist view of Adam and Alanna does not adequately represent them.  It’s painful to think that someone views their life as a list of lies they tell themselves, but it doesn’t mean this characterization fits Adam and Alanna.  It’s a hopeless view of life- it’s the exact opposite of the accepted versions of these characters.  King knows his DC characters.  Why do Adam and Alanna get this treatment?  Where is the Tom King that wrote the brilliant and iconic Superman: Up in the Sky?

Finally, it doesn’t make sense that Alanna and Mister Terrific could end up saving Aleea so easily.  Surely, Adam Strange with all his experience and victories in the past could have come up with something.  In terms of the depiction of the Pykkts that we’ve been given, I’m not sure the ending we have even makes sense in the context of the story.  This furthers the notion that this was never intended to be a story about Adam Strange, but therapeutic writing for King at the expense of the characters. 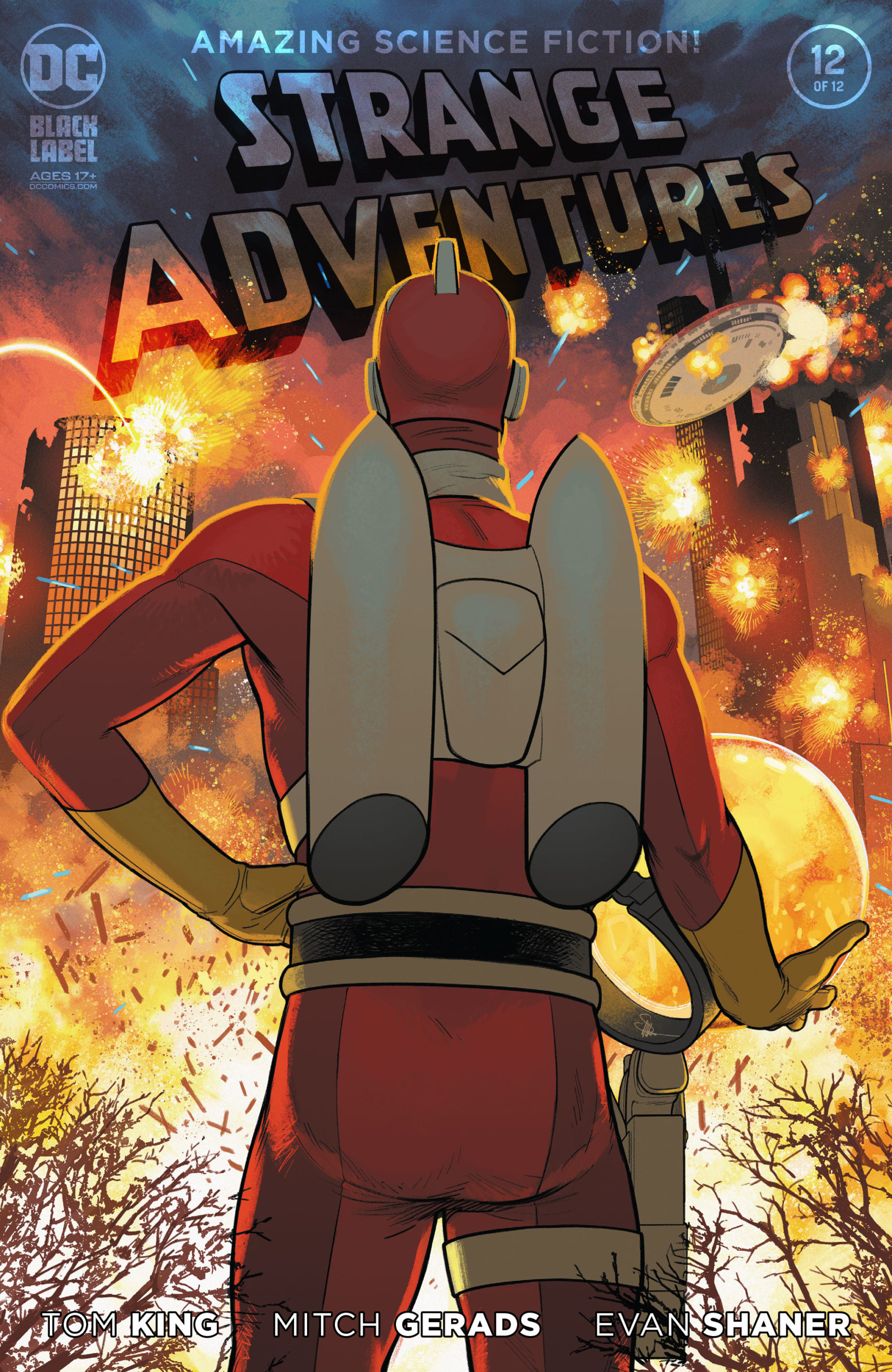 If you are a fan of Adam Strange I cannot recommend reading Strange Adventures #12.  Everything you’ve feared since issue #1 is basically true.  There is no hero.  There is no satisfying resolution.  Everything just falls apart.  It’s better just to think of it unfinished.  This isn’t to say that the first 11 issues aren’t some great comics!  If you aren’t a fan of Adam Strange and you are just here for the hype, then there’s nothing really new in this issue.  You’ve seen this ending before, and you guessed it since issue #1.   It’s a reminder that in real life things just happen and there are no happy endings and there aren’t heroes, there are just people that do things.  There’s no substance to the nihilism in this story   And, if that’s the message, it’s not a message that helps you get out of bed the next morning.