Welcome to the latest edition of DCN Cosplay Spotlight, where I talk to some very talented people in the wonderful world of cosplay.  This week, I had the pleasure of talking with the very talented AMH Cosplays. We discussed her love of Wonder Woman and so much more. Check out our interview below and enjoy!

DC COMICS NEWS: Tell us a little bit about yourself. Where are you from originally?

AMH COSPLAYS: I was born in New York City and lived in Peru and France before settling down in New Jersey. I’m currently in Michigan.

DCN: What was your first ever cosplay project?

AMH: Back in high school, my friends and I made our own Star Trek uniforms out of clothes we bought at a discount department store. We proudly wore them to a Star Trek event in Manhattan. It wasn’t called cosplaying back then, though. It was just being a Star Trek nerd! My first “official” cosplay, however, was Ranma Saotome (boy type) from Ranma 1/2. I still cosplay Ranma, although now I do both boy type and girl type.

DCN: You’ve done several variations of your Wonder Woman cosplay. What is it, for you, about this character in particular that made you want to create a cosplay? And do you have a favorite version?

AMH: I grew up watching Super Friends on Saturday mornings, and Wonder Woman was always such a strong, no-nonsense presence amidst all the testosterone at the Hall of Justice. She was wise, strong, and decisive, and she held her own in a male superhero’s world. Being able to become Wonder Woman, even if it’s just for a few hours, is so empowering. I do appearances as Wonder Woman at local events, and it’s so rewarding to see young girls excited about this character. I currently have eight versions of Wonder Woman (with four more in the works). My favorite of these is my New 52 Wonder Woman. I just like the way her suit looks, with the silver tones instead of the gold. 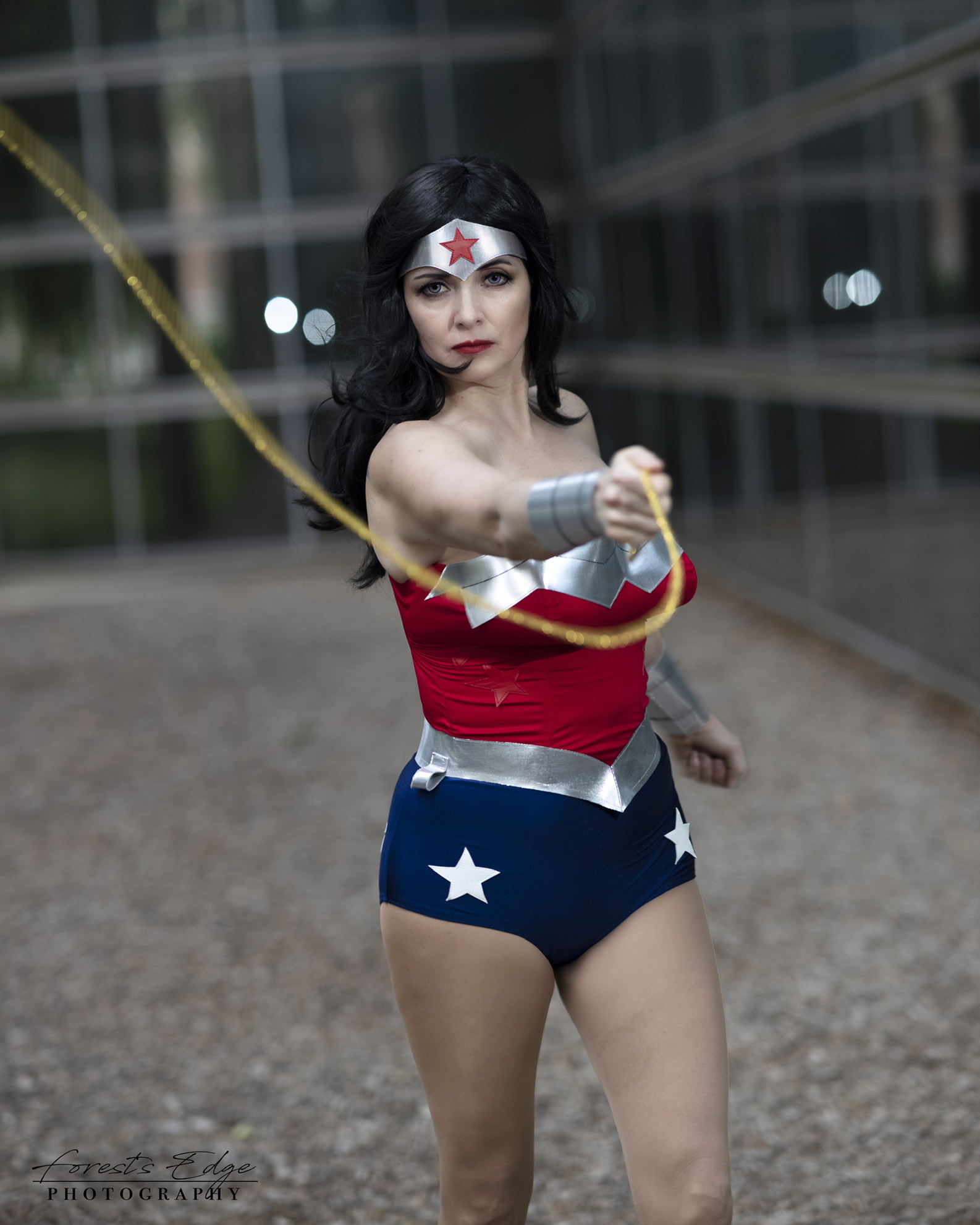 DCN: With Wonder Woman being more in the public spotlight recently, especially with this year being her 80th anniversary, have you felt any added pressure to portray this character right?

AMH: I do my best to keep my cosplays as canon as possible. With Wonder Woman, it’s a little tricky, since she literally has more than 30 versions dating back to 1941. The style of her belt, the cut of her brief, the shape of her tiara, the number of stars on her brief or skirt, the eagle vs the stacked WW… there are so many little details that change from year to year and from revision to revision that it’s very challenging to portray Wonder Woman as “right.” All any Wonder Woman cosplayer can hope to do is portray her as sincerely as possible.

DCN: How long does it typically take you to put a cosplay together? Which one took you the longest to complete?

AMH: My cosplays come from a variety of sources. Some are commissioned specifically for me, while others are bought online. Some I assemble piece by piece from stores, online vendors, and thrift shops. Others I make from scratch. When I am determined to get a cosplay complete, I usually pull it together within a week or two.

As for which took me the longest to complete, my Salem cosplay (from RWBY) took exactly four weeks to sew from scratch. There are a few cosplays that I’m still working on, however, that beat that. I’ve been very slowly working on Blackest Night Wonder Woman since 2019. My original goal was Halloween 2020. Then it was Halloween 2021. Now it’s Halloween 2022. I’ve also been working on a Gijinka Jigglypuff since Spring 2020. I work on so many all at the same time that the seasons change on me and I have to rotate my projects to match the season. 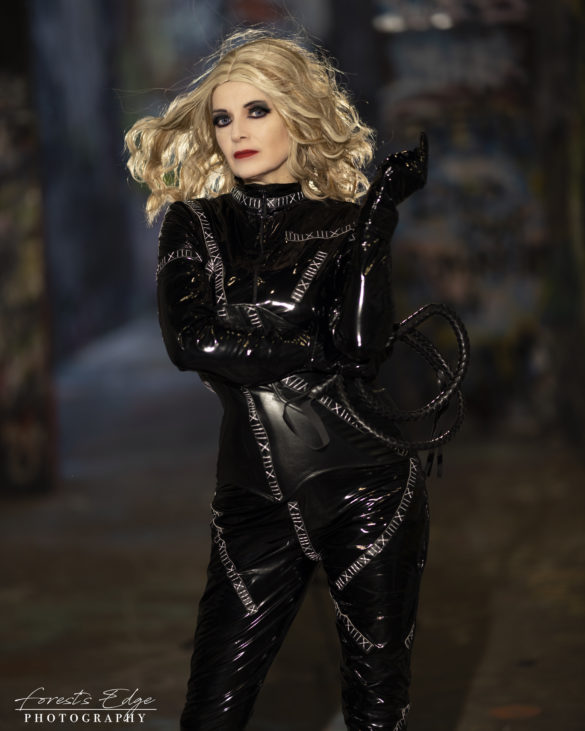 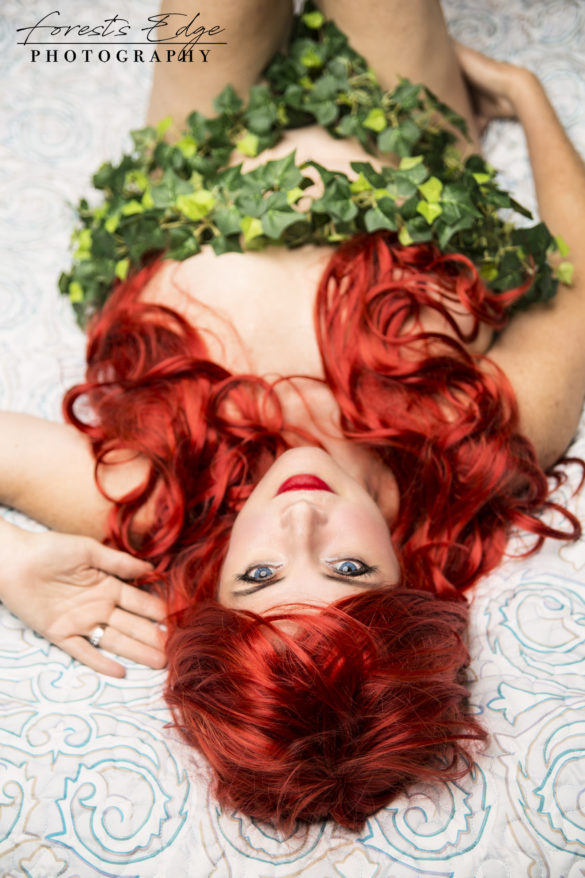 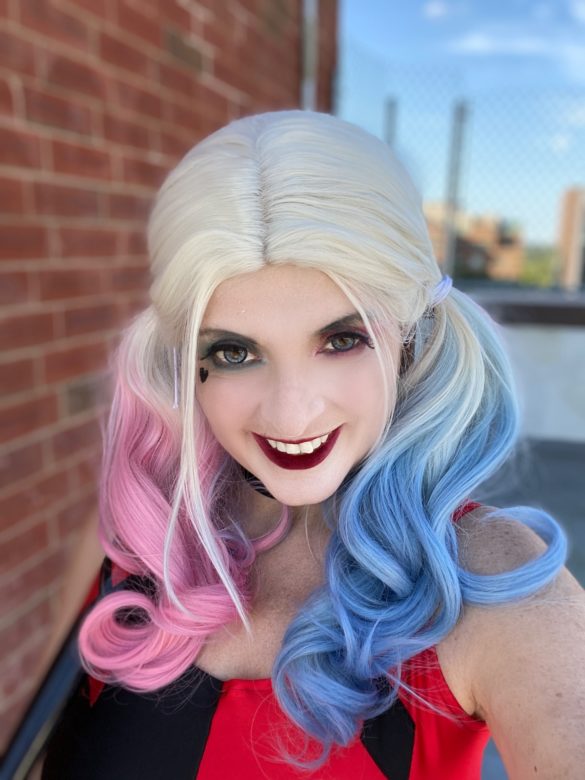 AMH: I have to have a connection with the character in order to cosplay them. I won’t cosplay a character I dislike. I just can’t. When I put on a cosplay, I assume that character’s persona, and I usually stay in character the entire time I am in cosplay. I get a lot of suggestions from fans and followers, which I appreciate, but if a character doesn’t connect with me, I won’t do it. Chi Chi from Dragon Ball comes to mind. I can’t stand that character, so you won’t ever see me cosplay as her.

DCN: You’ve done other DC characters, such as Batgirl, Supergirl, and Harley Quinn, among others, so other than Wonder Woman, what has been your favorite cosplay project so far?

AMH: DC Comics is the source for a large percentage of my cosplays. To date, I have 27 DC cosplays, with several more in the works. I have three versions of Supergirl, two of Power Girl, two of Batgirl, the eight Wonder Woman cosplays, six of Harley Quinn, and six of Poison Ivy. Outside of Wonder Woman, my favorite DC cosplay character is Poison Ivy. She is such fun! Smart, sultry, and environmentally … pro active. I’m working on a number of Poison Ivy projects. I just bought the fabric to make Ivy from the animated Harley Quinn series as well as from the animated Batman series. I am just wrapping up an autumn version of Ivy — I literally just have one glove left to sew — that I hope to debut at the 2021 Youmacon.

[Editor’s Note: Youmacon has since passed, and you can see AMH Cosplays’ Autumn Ivy outfit and others from Youmacon below] 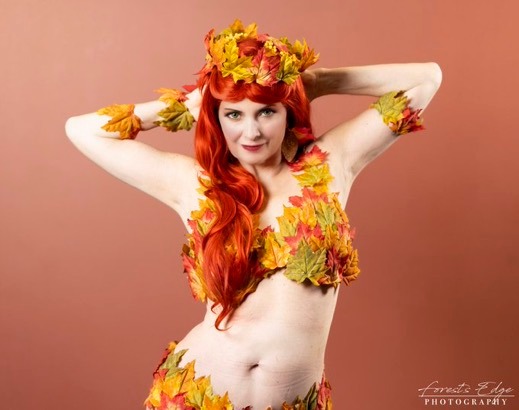 I’ve also been taking Ivy through the ages. I’ve done 60s Ivy and 70s Ivy, and I’m pulling together 20s Ivy, 50s Ivy, and 80s Ivy. I also have a wacky idea for an Ivy mash-up, but I need to think that one through a little more since my husband thinks no one will understand it but me. 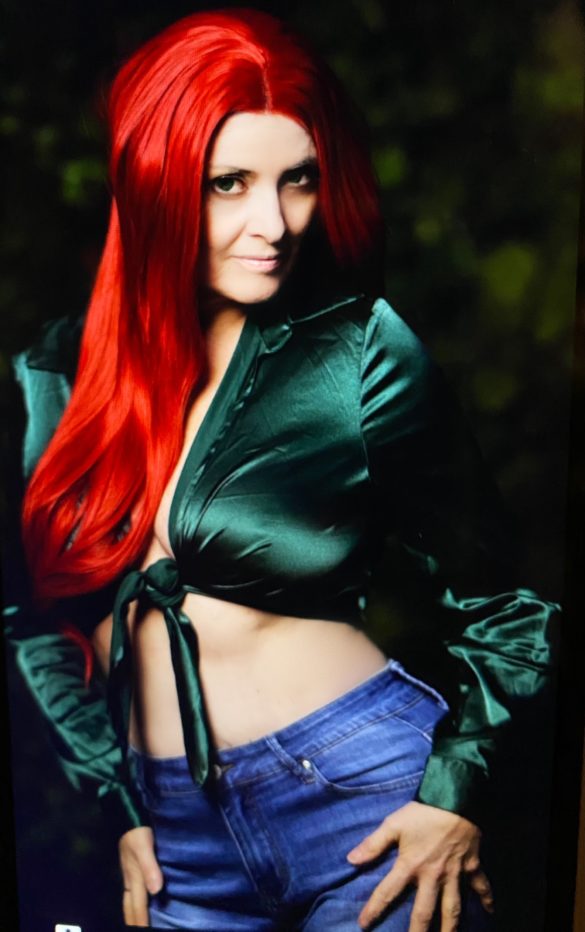 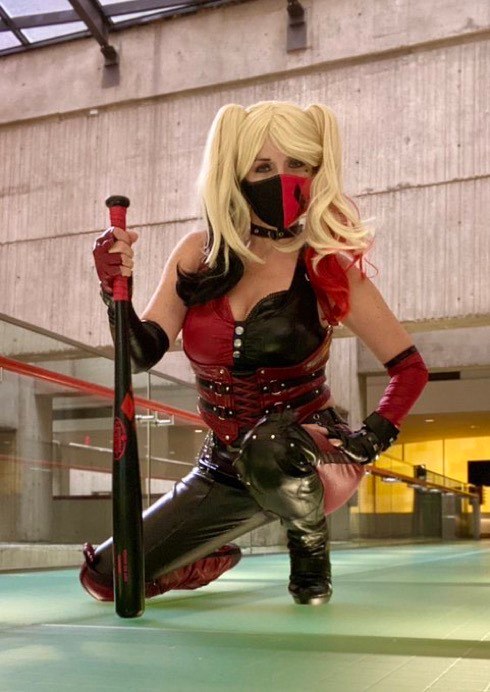 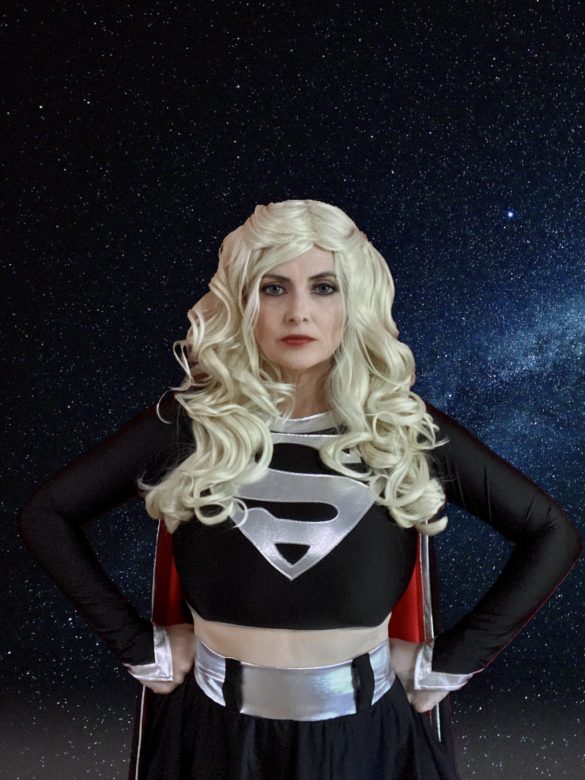 AMH: A few years ago, I attended a local comic con. I was scheduled to serve as an official at a triathlon the next day, so I checked into the hotel dressed as Midnight from My Hero Academia. The lobby was full of triathletes checking into their rooms, and I got quite a few looks and raised eyebrows. The next day, as I was patrolling the race’s transition area, a triathlete approached me shyly. I thought he was going to ask when the transition was going to close or when he had to report to the swim staging area. Instead, he said, “Excuse me, ma’am, but wasn’t that you in the costume in the hotel lobby yesterday?” Here I was, in my referee uniform, not a stitch of makeup on my face, with my own hair (versus a wig) pulled into a ponytail and a baseball cap on my head… and he still recognized me. I guess my cosplay must have made quite an impression!

DCN: Outside of cosplay, do you have any other interests/hobbies?

AMH: I am a competitive runner (recently placed 5th in my age group in a Halloween 5K this October) and triathlete (I was fortunate enough to be a member of Team USA at the 2018 Worlds in Odense, Denmark).  I love to cook and bake, and I’m an avid reader. I love to travel and explore new places, and I can’t wait for the world to be safe again so I can travel again. For now, though, two cats are kind enough to keep me as their pet human. 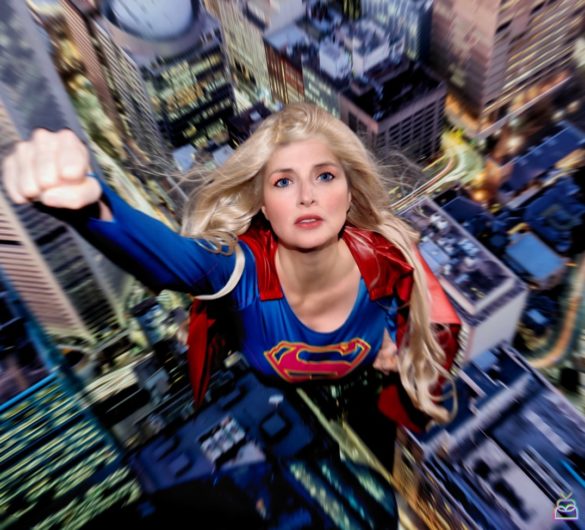 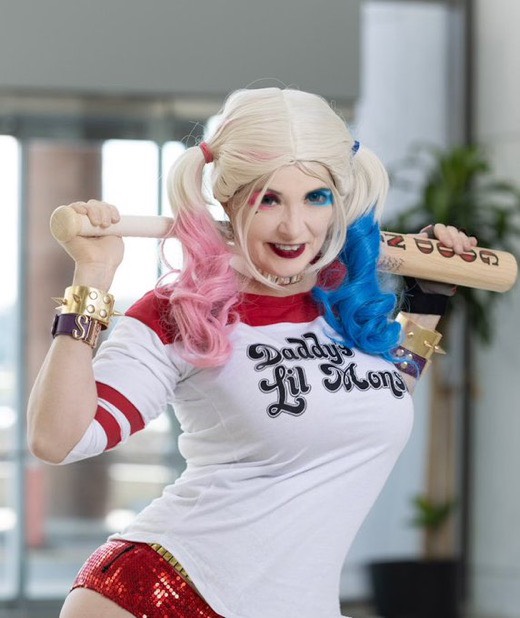 AMH: My husband is a cosplay photographer, so he is very supportive… except when I remind him that I need photos of my new cosplays! Two of my sons also cosplay, and one of them has asked me to create a cosplay for him, which I’ll be working on this winter. My friends are extremely supportive of my cosplaying, which makes up for my confused and non-supportive older relatives who keep telling me to grow up (never!).

AMH: A lot of ageism exists in cosplay. It’s sad but true. At cons, photographers tend to ignore anyone over the age of 40. On social media, people leave crass, tasteless, and hurtful comments on older cosplayers’ posts. I’ve had people tell me that younger cosplayers have come up to them and directly told them that they are too old to cosplay. Exactly who set an age limit to cosplaying? Who gets to decide what age is deemed “too old”? Cosplay is a hobby that can be enjoyed by all ages, young and young at heart. This negativity bothered me so much that, in 2019, my husband and I founded Cosplay Over 40, a multimedia platform that focuses on the magnificent, often-overlooked older cosplayer. Our main base is on Instagram, and we do our best to promote cosplayers in their 40s, 50s, 60s, and even 70s. Every single one of these people love cosplaying and should be celebrated for their efforts and achievements, not shot down, ignored, or otherwise disregarded because they happen to be 40 or older. 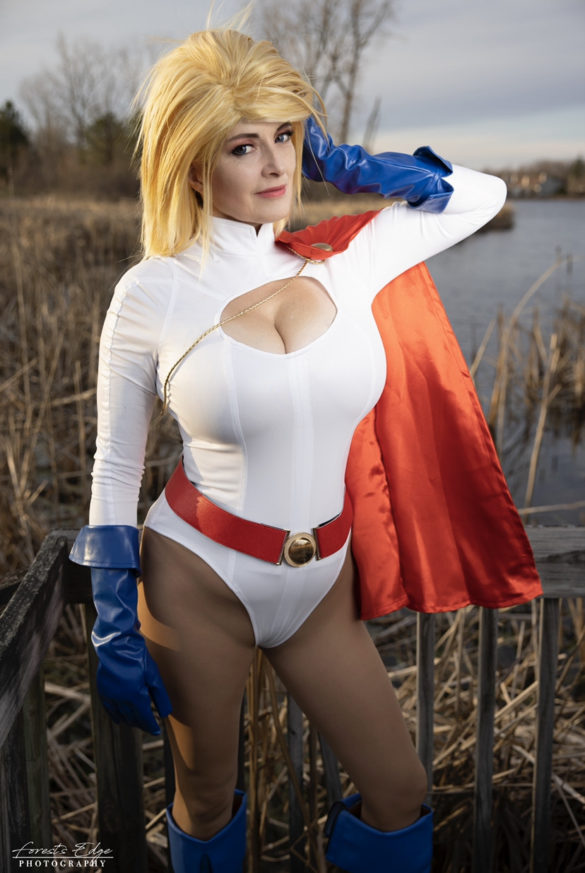 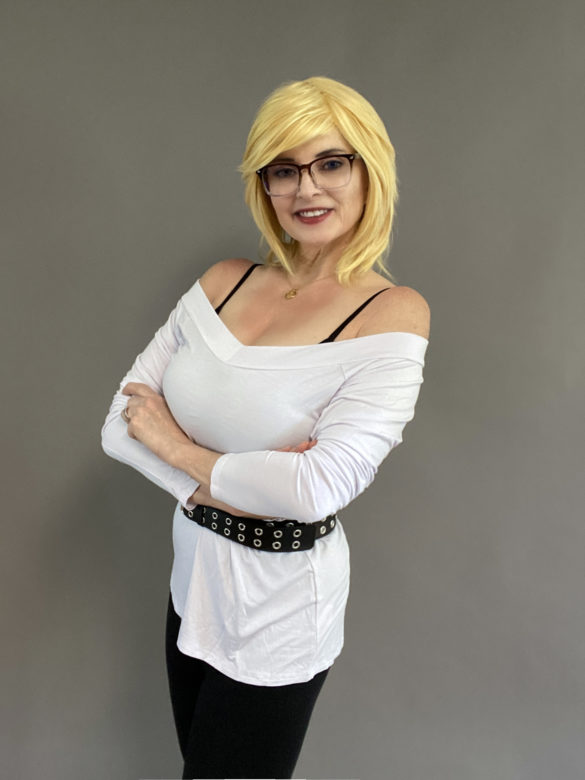 DCN: Do you have any cosplays you will never do and why?

AMH: Aside from the aforementioned Chi Chi? I won’t rule anyone out. There are so many genres out there to explore in cosplay, from video games to literature to film and TV. As long as I feel some sort of connection to the character, any cosplay is game! Except Fortnite. My kids told me they’d disown me if I ever cosplayed from Fortnite.

DCN: Why do you think cosplay has become so popular in recent years?

AMH: Life in the 21st century is very stressful and demanding. So many industries are downsizing and automating, and people who’ve been working for decades suddenly find themselves unemployed and competing with college grads for what entry-level jobs are out there. There are so many stressors causing anxiety and unhappiness and so many expectations for success riding on all our shoulders. All this makes you want to just step away from the world… and cosplay allows you to do that. In cosplay, you can be anybody, if only for an hour or an afternoon. You can leave the pressures of your regular life on the sidelines and be a superhero or villain, an anime protagonist, a TV character. You can bring smiles to other people, who see one of their favorite characters come to life. Cosplay is such a wonderful pastime and it lets you temporarily escape your worries in a way that brings joy to others. Who wouldn’t love cosplay?

DCN: Which DC character may we see next from you?

AMH: I am planning on debuting my Atlanna cosplay at Youmacon 2021. [Which can be seen below] 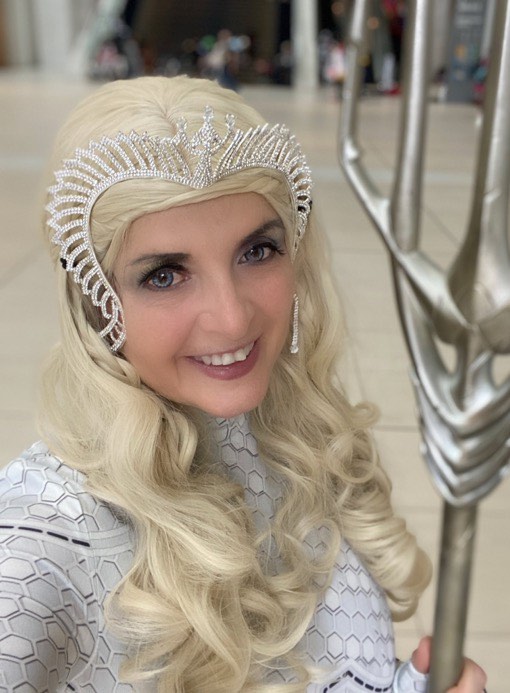 DCN: Thanks so much for your time!  Let our fans know where they can find you.

Once again, I’d like to give a special thank you to AMHCosplays for taking the time to do this interview. Please be sure to check out her work on social media and support this very talented cosplayer!