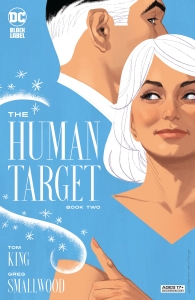 The Human Target #2: Christopher Chance now has 11 days to solve his own murder. With almost no leads, it would seem the case of his own death has gone cold…but it’s about to get a whole lot colder. Enter Ice, a former member of Justice League International, arriving at Chance’s office with some unexpected information…and mysterious intentions.

Tom King’s latest detective story continues with The Human Target #2. Christopher Chance has been poisoned and he only has eleven days left to solve his own murder. His primary suspects are the former members of the Justice League International. In this issue he meets and gets to know Tora Olafsdotter, a.k.a. Ice.

When I first read this issue, I thought King was introducing some major changes to Ice’s backstory, but checking her DC Wiki page, her history is exactly as King relates it. Ice has a reputation as the nicest member of the Giffen-era League, but King hints that there may be a darker side to her character.

The poison affecting Chance was apparently intended for Lex Luthor, so he is looking for someone who has a grudge against Luthor. As Luthor was directly responsible for Tora’s death (she didn’t stay dead). This immediately puts suspicion on three suspects: Fire, Ice’s best friend; Guy Gardner, her ex-boyfriend; and Ice herself.

On the surface, this story has a heavy romantic aspect. There seems to be some feeling developing between Chance and Ice. But there’s a darker, hidden side to the story. We find that Chance manipulated Ice into confronting him by leading her to believe that Fire was his primary suspect. And so Ice volunteers to help Christopher Chance to solve the mystery. But is she doing so to protect Fire, or herself? And does she want the mystery truly solved, or does she want it covered up? 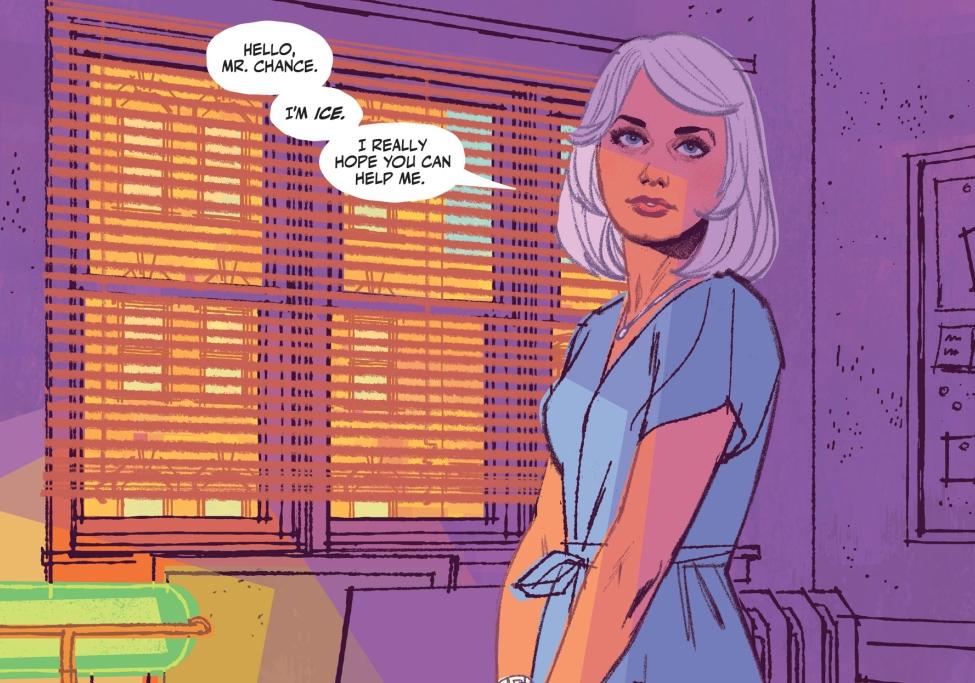 It’s telling that Ice is given the opportunity to let Chance die and end his inquiry then and there. But Ice doesn’t act on this. This could be an indication of her innocence. Or perhaps she’s capable of seeking revenge on Luthor, but can’t cold-bloodedly kill someone she doesn’t have any animosity towards. Or perhaps she believes she can keep Chance from solving the crime until his time runs out.

I have a feeling that Ice isn’t the poisoner. Firstly, I don’t think that she’s the kind to enact a devious plot to poison anyone. If she were to kill, it would have to be an extreme action in the heat of the moment. Also, the fact that Ice is the first suspect that Chance looks into makes it unlikely that she will end up being the actual poisoner.

I think that Chance suspects Fire of seeking revenge on Luthor for Tora’s death. Guy isn’t likely to try to kill someone using a subtle method like poison. But Beatriz DaCosta was a secret agent for the Brazilian government. So, assassination by poison sounds like something she might be capable of.

I am really enjoying Greg Smallwood’s artwork for this series. The Justice League International was a particularly bright and colorful title, and Smallwood’s art and colors fit that aesthetic perfectly. The illustrations are crisp, clear, and have an interesting retro feel that beautifully suits King’s story. And I love the Clue homage interlocking variant covers for this issue and last month’s issue.

I do have to wonder if the hints about Ice’s darker motivations are a bit out of character for her. But considering the dark edge to her backstory, they might be warranted. And so far, they are only hints. This early in the story, King hasn’t confirmed that Ice has any hidden agenda or malicious intent. I would much prefer that Tora remain the nice, decent character she is usually portrayed as. So, hopefully, King’s story won’t compromise that interpretation of the character.

The Human Target #2 shows Christopher Chance starting his investigation of the Justice League International. Ice makes for a good, calm opening into the case, but the team has a wide variety of personalities. Each is likely to require a different approach. I look forward to seeing how Chance fares with each of them over the rest of the series.